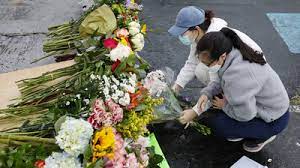 Opinion. Robert Aaron Long, a 21-year-old white man, on Tuesday walked into three Atlanta-area spas owned by Asian Americans and killed eight people in cold blood during his rampage. Six of the people killed were of Asian descent and two were white. Seven of those killed were women.

Long, who was arrested within hours 150 miles south of Atlanta, has confessed to the crimes.

At a press conference the next day, the spokesperson for the Cherokee County Sheriff’s Office, Capt. Jay Baker, said he did not think Long’s actions were racially motivated, but suggested that the killer “was pretty much fed up and kind of at the end of his rope. Yesterday was a really bad day for him and this is what he did.” Perhaps, Baker felt the need to grant Long a free pass for his dastardly evil deeds.

Baker, who last year posted on his social media page several photos promoting shirts with the slogan “Covid-19 imported virus from CHY-NA,” was rightfully relieved of his spokesman duties by the end of the week.

Long’s “bad day” triggered fear among Asian Americans and Pacific Islanders that have had to live with racism since the former President Donald Trump deflected his gross ineptness in dealing with the Covid-19 pandemic by blaming, in his pronunciation, “Chy-na.”

News from Atlanta produced fear for Debra Yepa-Pappan, an accomplished award-winning artist who lives in Chicago. She is Jemez Pueblo from her father’s side and Korean from her mother.

On Thursday, she posted this message on her Facebook page:

After reading Yepa-Pappan’s post, I talked to her. She described how her parents taught her to respect and embrace both her Asian and Jemez cultures.

For UCLA sociocultural anthropology Ph.D. student Viki Eagle, who is a tribal citizen of the Sicangu Lakota Nation from her father and half Japanese from her mother, Tuesday’s events reminded her of the complexities of being bi-racial.

She echoes Yepa-Pappan’s point of there has always been violence against women of color, Eagle says she has attended Missing and Murdered Indigenous rallies to in the past to lend support to the Denver Native American community.

Both Yeppa-Pappan and Eagle mentioned Capt. Baker’s reference to Long having a bad day as being in poor taste that diminished the horrible murders of Asian women.

One day after Long killed seven women in the Atlanta area, the U.S. House voted to reauthorize the Violence Against Women Act (VAWA). The bill will go on to the Senate where 60 votes are needed to pass the legislation. Its passage is questionable because for many Republicans the bill is viewed with a partisan issue, not a social justice issue.

Republicans, along with the National Rifle Association (NRA), opposed the legislation because it has a provision, the “boyfriend loophole,” which would bar any partner accused of stalking or abuse from obtaining a firearm. A similar provision was in the VAWA bill enacted in 2013. The law disallowed gun permits to those convicted of domestic violence or abuse against their spouse, lived with or had a child with an abuse survivor.

According to the American Journal of Public Health, access to firearms increases the chance an abuser might become a murderer.

Last week’s shootings—or the Atlanta killer’s “bad day”—was a stark reminder that racism and sexism are alive in America. The Atlanta killings added yet another ugly stain on white male behavior towards women of color. Whether fueled by anti-Asian sentiments because of our nation’s former president, or motivated by simple evil, violence against Asians should be repudiated.