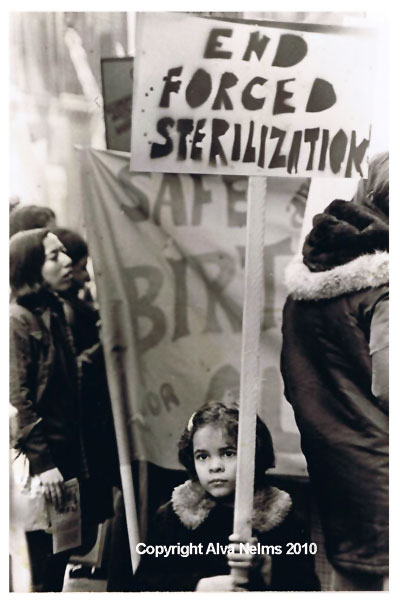 The whistleblower, Dawn Wooten, a licensed practical nurse at the detention center, said, “I had several detained women on numerous occasions that would come to me and say: ‘Ms. Wooten, I had a hysterectomy. Um, Why?’ I had no answers as to why they had those procedures.”

The alleged stories of mass hysterectomies were quite disturbing because they are reminiscent of the sterilization of Native women during the 1970s by the federal government that came to light after a keen American Indian woman doctor became suspicious after a patient visited her office.

In November 1972, a 26-year-old Native woman visited the office of Dr. Connie Pinkerton-Uri (Cherokee, Choctaw) and asked for a “womb transplant” because she and her husband wanted to start a family.

Shocked by the request, Pinkerton-Uri discovered that six years prior to the visit, the Native woman was given a full hysterectomy by an Indian Health Service (IHS) doctor because she had a drinking problem. The IHS physician had lied to the woman by telling her the procedure could be reversed when she wanted to have children.

Pinkerton-Uri had to inform the young woman that a complete hysterectomy could not be reversed.

In later accounts of the visit, Pinkerton-Uri reported that the encounter left her tears. She knew she had to discover more information about why the IHS doctor lied to the woman. The visit set in motion efforts by Pinkerton-Uri to uncover thousands of similar cases of complete hysterectomies. An independent study conducted by Pinkerton-Uri discovered that one in four Native women had been sterilized without consent. Her study said research bore out that IHS had “singled out full-blooded Indian women for sterilization procedures."

In one case, an American Indian woman was given a full hysterectomy because she complained of headaches. Her headaches persisted after the unnecessary sterilization, and were ultimately the result of a brain tumor.

Pinkerton-Uri and other activists put pressure on Congress to investigate what was concluded to be cruel and inhumane abuse of thousands of Native women. Sen. James Abourezk (D-S.D.) took up the cause to investigate IHS practices.

The investigation uncovered a federal government program that sought to sterilize American Indian women. In 1976, a study by the U.S. General Accounting Office (GAO) found that 4 of the 12 Indian Health Service regions sterilized at least 3,406 American Indian women without their permission during the 1970s.

The 1970s sterilization abuse perpetrated against Native women would suggest a concerted effort by the federal government to stop reproduction among American Indians in what could be labeled as a modern-day attempt to continue the genocidal practices by non-Natives against this continent's first peoples.

Fast forward to this past week’s whistleblower accusations, Rep. Deb Haaland (D-N.M.), a tribal citizen of the Laguna Pueblo, tweeted on Wednesday evening: “Dawn Wooten’s whistleblower account is terrifying and brings to light the generational trauma caused by efforts to exterminate communities of color and people with disabilities. We need an investigation.”

She joined 172 other members of Congress on Tuesday in signing a letter to Dept. of Homeland Security Inspector General Joseph V. Cuffari to open an investigation into Wooten’s allegations against ICE.

The letter, in part, states:

“The reports of mass hysterectomies cause grave concern for the violation of the bodily autonomy and reproductive rights of detained people. Everyone, regardless of their immigration status, their language, or their incarceration deserves to control their own reproductive choices, and make informed choices about their bodies.”

Wooten is represented by Project South and Government Accountability Project, two advocacy groups. In a 27-page complaint, the allegations of mass hysterectomies emerge against the Irwin County Detention Center, a privately-owned prison contracted by ICE to house immigrants.

Some of these immigrants come from Indigenous tribes in Mexico and Central America. We can only hope history is not repeating itself. While it is too early to know the complete truth behind the alleged unwanted hysterectomies or the exact number of victims of this abuse, if one happened under ICE’s control, then that is one too many.