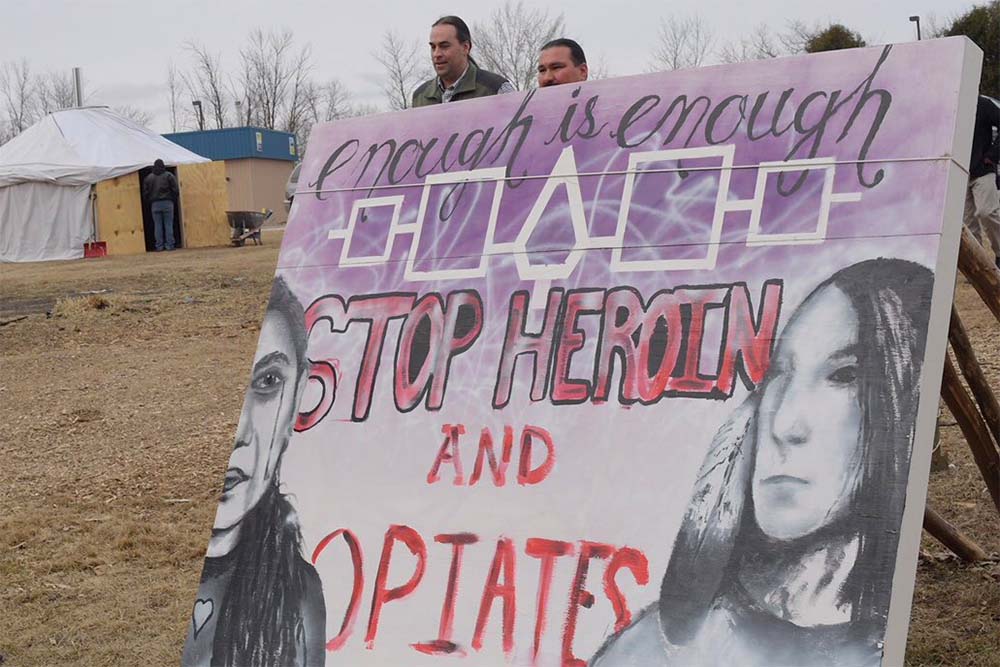 Jase Roe, a citizen of the Northern Cheyenne Tribe, struggled with addiction for more than 20 years. Roe, who identifies as Two Spirit and uses they/he pronouns, said they tried at least 12 treatment centers, but after a few months or a year, they always relapsed.

“‘What's wrong with me? Why can't I get this? Why can't I get sober? Maybe they're right, Natives can't get sober.’ All this stuff goes through my head. It wasn't until I started… looking into who I am as a Native and what it meant to me and started realizing that maybe the 12-step program for myself wasn't working,” Roe said of their path to sobriety.

As of 2017, American Indians and Alaska Natives had the second-highest opioid overdose rate of all racial and ethnic groups, at almost 16 per 100,000, as well as the second-highest overdose death rate from heroin and third-highest from synthetic opioids, according to the Indian Health Service.

Roe’s method of reconnecting with their Native identity, along with a medication-assisted treatment plan, is likely what works best for many Native Americans struggling with addiction. “The power of being reconnected with your Native community is absolutely the best practice for Native Americans. And it fills them up with hope and feeling in a different way. It's almost indescribable,” said Katora Yellow Horse-Ruiz, a substance abuse treatment specialist at the Indian Health Center of Santa Clara Valley and a member of the Lakota tribe of Cheyenne River.

Because that experience was so transformative for them, Roe now works at Minneapolis’s Minnesota Indian Women’s Resource Center’s Wawokiye Center (which loosely translates to “caretaker” or “helper,” depending on whether you’re using the Dakota or Lakota translation) to provide Native women and Two Spirits in the Native community with what Roe calls “culturally appropriate services.”

When Roe goes into encampments to offer help, they engage in practices that helped Roe break the cycle of addiction, starting with talking about stigma.

“We have a stigma against people who are struggling with mental health, we tend to push them away or tend to look at them some sort of way,” Roe said. “In our community, we can't afford to do that. We can't afford to have a stigma against our people that are sick, that are experiencing homelessness, because we're losing a whole generation. We're losing a whole generation to opioids.”

Not only does stigma surround the disorder itself, but it also surrounds the treatment: MAT therapy, which is one of the most effective therapies for treating addiction. One study found that it decreased heroin overdose deaths by 37 percent.

“For opioid use disorders, there is a stigma around using medication to treat [opioid addiction] that is viewed as drug dependence, so combating that stigma is really important,” said Marissa Seamans, a professor at UCLA who works at the intersection of social epidemiology and pharmacoepidemiology.

Roe does this by what they call “meeting a relative where they’re at,” which entails providing a judgment-free environment while providing needles, Narcan and other supplies. Roe then gently reminds people not to use alone, to sanitize and switch up their injection sites and to use clean needles each time they use. Roe’s organization also provides other necessary resources to ensure success: gas cards or bus passes to get to appointments, a clean shower and grocery money.

Jack Martin, a member of the Yupik tribe enrolled in the Alaskan village of Aniak and a co-founder of Southside Harm Reduction, the largest needle exchange in Minnesota, said harm reduction hews closely to Native values in that both push against a colonial framework that takes a punitive approach to addiction.

This punitive approach, which includes the loss of housing, jobs and children and jailing, is antithetical to the community approach Southside adopts.

“Building community is not only to make sure everyone has Naloxone and can reverse overdoses,” Martin said, “but also a strong united community is a way to push for… changes in policing and sentencing and bigger changes that are so important to the health of people who use drugs. I think a lot of those values in harm reduction really overlap with a lot of traditional values.”

Connection with one’s Native community and culture can often be the key to overcoming addiction.

Yellow Horse-Ruiz, the Santa Clara-based substance abuse treatment specialist, said that feeling disconnected from oneself and community is often a significant contributing factor to addiction because “people begin to connect with the drug rather than with people other than themselves,” she said.

In her treatment approach, she teaches about one’s traditions and culture to give patients a sense of belonging—something she said she lacked growing up in the Bay area, far from her Native relatives in South Dakota. She incorporates traditional elements in her treatment plan, like the use of the medicine wheel, ceremonies, prayer, smudging and other elements of spirituality.

Roe said learning these traditions, which at MIWRC include the aforementioned practices, as well as lessons from elders, pipe ceremonies and ribbon skirt-making classes, help Native clients feel proud of their Native identity. Becoming attuned to both their Native identity and traditions were also core components of their own recovery process, since Roe didn’t grow up learning about them.

“It has been so helpful finding out what it meant to me to be a Two Spirit, what it meant to be in the community and what I wanted my life to look like, and then going after those goals and relying on community,” Roe said.

It’s also important to keep these practices specific to each tribe, according to Kateri Coyhis, a member of the Mohican Nation and executive director of White Bison, an organization that provides culturally based training and resources for recovery and prevention in Native communities.

White Bison provides a flexible template for trainees, who bring the lessons learned back to their treatment center, halfway house, prison, school or community. The program embraces traditional teachings and values based on White Bison’s Four Laws of Change, which include lessons about goal-setting, healing and learning. People who go through the program can then incorporate their own traditions, languages and ceremonies into the template to make it more applicable to their own communities.

Coyhis said this approach is incredibly effective. “For Indigenous people, our culture, our spirituality is a way of life,” she said. “We have our ancestors in our DNA. And I think that when you bring in that cultural component, that speaks to you, because your ancestors are inside of you.”

For culturally sensitive opioid addiction therapies to work, they also must be trauma-informed.

“We've had generations that have experienced trauma in the past, and it hasn't been either addressed or there hasn't been enough time for healing, or even being allowed to heal in a safe space for many of our people, and that trauma continues to trickle down from one generation to another,” said Dr. Alec Thundercloud, director of the Office of Tribal Affairs and Policy at the Substance Abuse and Mental Health Services Administration. The destruction of language and culture, he added, can lead to a great sense of loss.

This is a lesson Coyhis teaches all her trainees, stemming from the U.S.’s history of forced assimilation of Native people and the legacy of colonization. “In our traditional communities, we were grounded in cultural values and language and spirituality and elders’ teaching. What we see now is our unhealthy forces are rooted in anger and guilt and shame and fear, and that's due to trauma that occurred,” she said. Many of the issues afflicting Native communities, from family violence to substance abuse, are all just visible effects of the root cause: intergenerational trauma, she added.

Yellow Horse-Ruiz has seen transformations among her patients who connect their history of substance abuse to their people’s history of trauma.

“When I talk about the cultural aspects of trauma, [patients] never made the connection of, ‘Okay, I live in this neighborhood, and I've been involved with gangs because of all this stuff that happened in the past, and I'm using these substances as a coping mechanism,’” she said. “It's like a light bulb goes on.”