The Sindecuse Museum of Dentistry, located on the University of Michigan’s campus in Ann Arbor, Mich., has launched a new, fun activity to engage young students to learn about dentistry. 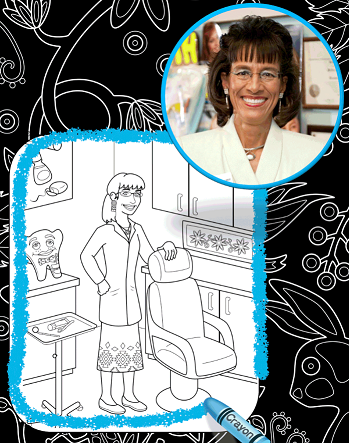 The project is a coloring activity with artwork that features Dr. Jessica Rickert (Prairie Band Potawatomi Nation), who became the first female Native American dentist in 1975 after graduating from the University of Michigan Dental School.

Even today, there only about 300 practicing Native American dentists in the country.

The coloring activity project is the brainchild of Dr. Rickert, who is now retired from practicing dentistry, but spends her time inspiring young Native Americans to become in involved in the STEM field. She would like to see more Native Americans become dentists. She believes students need to be inspired early in their educational path because thosse choosing dentistry as a career need to have science courses in their background for admission into dental schools.

Dr. Rickert explains that this number of Native American dentists should be much higher and attributes this low number to lack of representation.

“Never having seen an American Indian dentist, students do not imagine themselves as dentists,” Dr. Rickert said.

Dr. Rickert is featured in Sindecuse’s Museum Student Reflections Exhibit. In this exhibit she reveals that she was one of six women in her class of 140, and the first Native dental student.

Dr. Rickert was inducted into the Michigan Women’s Hall of Fame in 2009 and is profiled in the National Institutes of Health’s 2017 book, The Power of Role Models: A Collection of Native American Role Models. She is currently the Anishinaabeg Dental Outreach Specialist for Delta Dental Insurance of Michigan.

In coming months, the University of Michigan School of Dentistry will distribute packets to tribes and schools. If you desire packets, contact:

Tamara Barnes, Curator, Sindecuse Museum of Dentistry at the University of Michigan