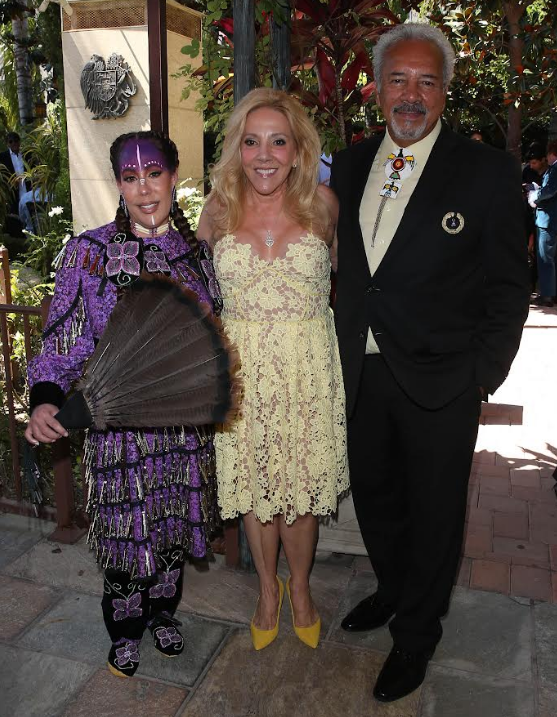 LOS ANGELES — Dressed in a traditional jingle dress, Erica Skynn, a tribal citizen of the Little River Band of Ottawa Indians, was joined at the Daytime Beauty Awards in Hollywood on Sunday afternoon by the leader of her tribe, Ogema Larry Romanelli. The two were on the red carpet because Skynn won The Innovation Award at the ceremony held at the Taglyan Complex.

The award show recognizes the science behind beauty and spotlights health-and-wellness professionals in the fields of dentistry, medicine, health and fitness, aesthetics, skincare, color and styling, cannabis and beauty innovation.

Skynn was chosen in the innovation category for her product line she developed called Derm7, which was designed specifically for ethnic skin. Derm7’s line includes five different categories to treat various skin conditions such as acne, scarring, melasma, bleaching and anti-aging.

"It was an honor for Daytime Beauty Awards to recognize Erica Skynn with The Innovation Award for Derm7,” Daytime Beauty Awards founder Michelle Elyzabeth said to Native News Online in an email. “We were so happy to bring Erica's accomplishments to the forefront as a woman in business and Native American. Not enough is being said about the Native American community's contributions to society.”

Skynn, who lives in Los Angeles, has several celebrities as clients who use her products, including former professional boxer Floyd Mayweather.

Though she grew up in California, far from where the Little River Band of Ottawa Indians is located in Michigan, Skynn says the tribe provided her with financial assistance when she went back to get her education as an adult.

“My tribe has been so good to me, I wanted our Ogema to escort me on the red carpet,” Skynn told Native News Online.

Romanelli, who flew from Michigan to Los Angeles, said he was happy to make the trip and was honored that Skynn asked him to escort her down the red carpet.

“I am extremely proud of her as a tribal ‘quay’—an Ottawa word for woman—for her accomplishments and very honored to have her ask me to accompany her as she receives her award at the Daytime Beauty Award,” Romanelli said. “She had more famous offers. The Little River Band of Ottawa Indians should be proud to have her as a member. I most certainly am.”

“I am truly humbled by all the adoration and so grateful for my tribe I could not have done it without them,” Skynn said.

Skynn was in good company on Sunday. Other Daytime Beauty Awards 2021 honorees include Paula Abdul (Outstanding Achievement in Health Sponsored by OmegaXL); Nancy Duitch and Nicole Kidman for Sera Labs (The Breakthrough Award),  Rea Ann Silva for Beautyblender (Tool of the Year).

Derm7 is marketed by Derm by Erica.