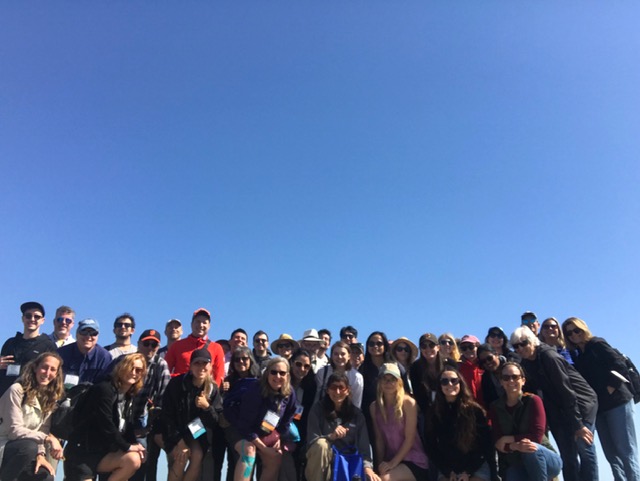 Sustainable Fishing, Coral Health and Marine Life in the Gulf of Mexico.

That’s the topic of the all-day tour I chose at the Society of Environmental Journalists 2022 conference, day two. Full disclosure: I am a member of the Society of Environmental Journalists, and they generously gave me a “diversity fellowship” to attend their conference, an annual gathering of hundreds of reporters committed to covering the environment, along with experts from government, academia, and the private sector. It is, in many ways, a reunion of people who understand the issues, have known each other and their colleagues’ work for years, if not decades–along with students and those just starting their careers–and almost all genuinely want to learn more.

There were other offerings conference attendees could choose from for a tour, including “Wildfires, Prescribed Burns and Indigenous Traditions,” led by Debra Krol, Indigenous Affairs Reporter at The Arizona Republic; “Flood Protection, Dam Safety and Cumulative Trauma;” “Superfunds: Climate Threats and Corporate Stonewalling;” and “Birds, Conservation, Diversity and Inclusion;” among several other topics. Each tour was in the field, all day, and included experts sharing their insights–mini-crash courses on various topics.

Sustainable Fishing, Coral Health and Marine Life in the Gulf of Mexico started with a 6 a.m., narrated bus ride to Galveston (think of a bus tour, in the dark), where we got on a fishing boat and took off into the Bay, past cargo ships and other fishing vessels.

Once we anchored, the deck hands brought out the fishing poles, piles of fresh squid, and set us up to fish. Men who fancied themselves fishermen cast their lines, while I held back getting a quick lesson from the helpers on board.

Then I cast my line.

Five minutes later, I reeled in a fish, to cheers of my colleagues.

Twenty minutes later, I reeled in another, to a few cheers.

Within the hour, I reeled in a third. By then, some of my colleagues had come to fish next to me, hoping for some good luck. Some continued to cheer me on.

Each fish was big and beautiful, and I thanked each before releasing them back into the Bay. I lamented the trauma they suffered at our expense–we were fishing only for sport, not to feed ourselves, or to share with a local soup kitchen. But, I confess, I was happy: The fish seemed to jump into the boat from my line, and it felt like a gift. Grateful.

From there, we went to the top deck of the boat to learn about the invasive lionfish (although in Florida, they are both invasive and considered delicious). Dolphins were circling the boat, and so I, seduced by their song, slipped back below to cast my line again, listening, watching the dolphins circle and stand in peace with the deck hands, who also cast their lines, and quietly waited. And we reeled in and released still more fish.

Dave Spratt, the intrepid leader of the Institute for Journalism in Natural Resources, joined us, and we stayed discussing Florida and the starving manatees until it was time to go back to shore for lunch. The albatross followed us, flying in figure eights, all the way back to shore, while our guides fed them, throwing up pieces of squid. The birds caught the squid like dogs catching tennis balls.

Here on the water, there is no war, no Facebook, no Twitter. No one is virtually stoned into cancellation. I wondered why I would ever want to go back to the internet.

So, instead of going to a computer, or even to my phone, we went to Moody Gardens for a lunch of gulf red snapper and shrimp, and a panel discussion on the sad state of coral reefs–-specifically, the Flower Garden Banks, the only National Marine Sanctuary in the Gulf of Mexico and just one of 15 national marine sanctuaries and two marine national monuments protected by National Oceanic Atmospheric Administration's (NOAA) Office of National Marine Sanctuaries.

This was a crash course in the health–and suspected demise–of coral that is thousands of years old.

Coral bleaching and disease related to climate change and warming seas are major threats, and mass die-offs have already occurred.

The good news is, even after bleaching, there is a small chance some of the coral will come back, even growing around the abandoned oil platforms that surround the Flower Garden Banks.

The bad news is, from an Indigenous perspective, the suffering of the ancient coral says much about the state of humanity.

Look for the bright spots, one of my teachers says.

The glimmer of hope is that some of the fish are relocating. The fish abundant in the Gulf and around Florida are moving to deeper, cooler water in the Gulf as sea temperatures rise. And they are moving North along the Atlantic seaboard.

That seems to be one common theme throughout the conference: Species are moving with climate change, becoming naturalized in new-to-them habitats, leaving their old habitats behind.

After lunch and a sad look at sick coral being fed in a fluorescent-lit lab, and penguins and stingrays in small aquarium prisons, we ventured out to Jamaica Beach and Galveston Island State Park, where we look at houses built on 20-foot stilts and dunes that have completely washed away. This is a scene common in the Gulf states, along the coast. In Florida, they keep “renourishing” the beaches with sand taken from the ocean–except the sand, if it’s not anchored with plant life, will wash away. Again. Among other problems.

More research, as they say, is needed. As if humans can stop the process. I imagine Captain Kirk saying, “We’ve got to try, dammit!”

Ring-billed gulls, sandpipers, and brown pelicans were easily spotted. The brown pelicans have returned, after leaving for a better life–thanks to Texas’ use of DDT. There were no sea turtles out and about, but several crabs poked out of the sand to say hello.

Another sighting we heard of, though we did not see: Pink Floyd, a “fugitive flamingo.”

One of our guides, from American Bird Conservancy, had choice words about Elon Musk during our walk back to the bus. In essence, he said what you might already think: Perhaps Musk should focus on healing the Earth, instead of causing even more environmental harm here while fueling his quest to populate Mars–only to eventually, of course, pollute that planet, too.

After the beach, we head back to Houston, making a Mad Max-style, private bus run through economically and environmentally devastated land, Gulf coast to the city.

My thoughts turn to what was here before oil and gas, before greed and colonized thinking came to suck the blood of our ancestors and the blood of Earth. Their appetite is still unquenched, the depleted land and the depleted poor who live with it are all hanging on together, still alive, waiting to be cleansed again, by another Hurricane, more Fire, more Wind and Rain, until the greed is washed away and balance restored.

The Earth, I heard a meteorologist once say, has a fever.

She is giving herself a sweat bath, one of my teachers tells me.

I remember my teacher's words, and find peace. 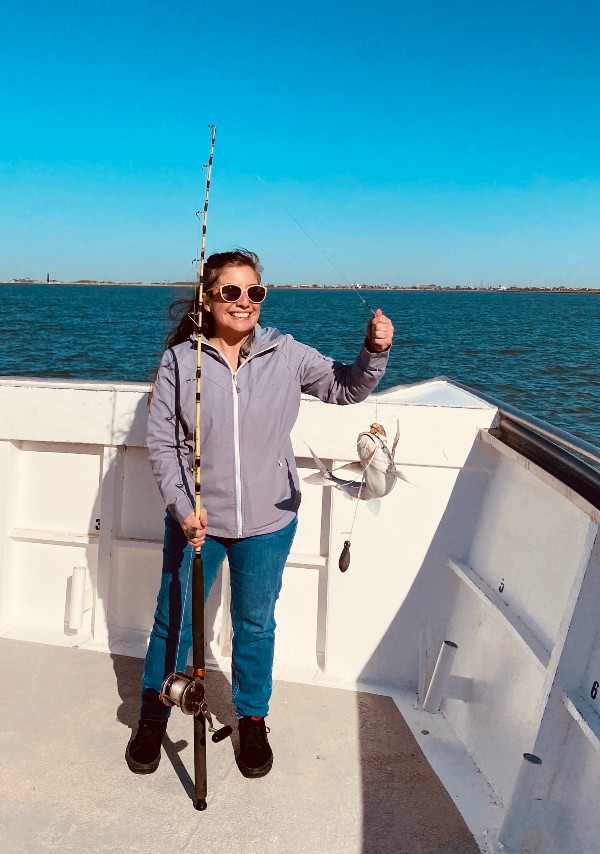 The author with her third catch. (Courtesy Photo)