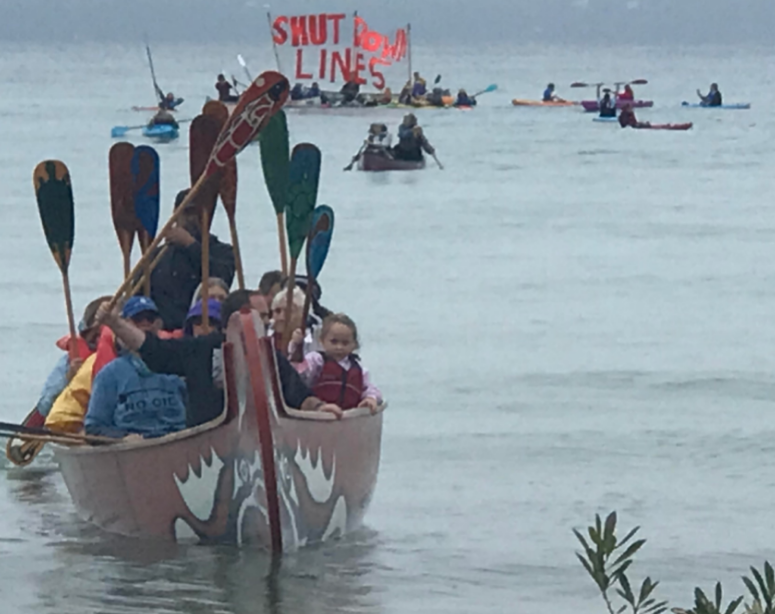 MACKINAW CITY, Mich. — Under a light drizzle,  traditional Great Lakes canoes and a couple of dozen kayaks participated in the Sixth Annual Pipe Out Paddle Up Flotilla on Saturday morning at the Straits of Mackinac in Mackinaw City, Michigan. One hundred other people remained on shore to lend their support for those who participated in the flotilla.

The annual event happens on the Saturday of Labor Weekend to draw attention to the dangers of Enbridge’s Line 5 twin oil pipelines that cross through the Straits of Mackinac. Michigan Indian leaders and environmental allies want to stop the oil flowing through Line 5 because the 68-year-old dual pipelines were built to last only 50 years.

Enbridge has proposed to put the pipeline in a tunnel, which the tribes oppose. In June 2021, the U.S. Army Corps of Engineers announced it will conduct an environmental review of the Line 5 pipeline project proposed by Canada-based Enbridge Inc.

As reported by Tribal Business News on June 23, the company wants to construct a tunnel and pipeline under the Straits of Mackinac between St. Ignace and Mackinaw City, Mich. The proposed 30-inch pipeline would be used to transport light crude oil and liquid natural gas. It would replace existing dual submerged pipelines, in place since 1953 without tribal consent. They currently cross the Great Lakes near tribal homelands.

Payment said if the pipe would burst during the winter when the Straits of Mackinac freezes over, the spill would be catastrophic to the Great Lakes. Millions of gallons of oil would flow into the fresh waters and the spill would not be reached for at least two weeks.

“This whole notion of a tunnel originated under our previous governor — the same  governor who poisoned children in Flint, Michigan, (and) who told us, ‘trust us, just trust us.’ The proposed tunnel is a red herring. We know from our environmental directors from across our tribes that a tunnel is not feasible. It is a smokescreen to allow them to operate as long as they can or until a spill happens. And a spill will happen if we don’t stop Line 5,” Payment said.

Enbridge has a lawsuit pending in the U.S. District Court. A court-ordered mediation, which is normal in federal civil litigation, is due to conclude on September 30, 2021. The lawsuit centers on the State of Michigan seeking to decommission Line 5.

There is no public indication that any agreement between Enbridge and the State of Michigan is likely as a result of mediation.  Once mediation concludes, U.S. District Judge Janet Neff is expected to rule on the State of Michigan’s motion to allow the state to proceed in state court with its decision to decommission Line 5.

Meanwhile, Line 5 continues to be a threat to the Great Lakes.