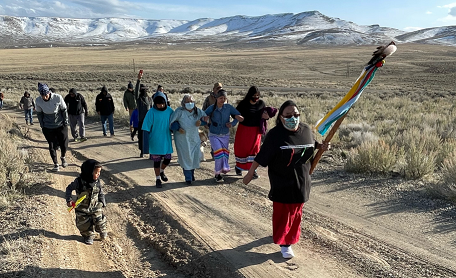 In recognition of the International Day of the World’s Indigenous Peoples, Indigenous leaders from around the world will launch a new site – www.sirgecoalition.org – as part of the official public announcement of a new coalition to Secure Indigenous People’s Rights in a Green Economy (SIRGE Coalition).

Cultural Survival, First Peoples Worldwide, Batani Foundation, Earthworks, and the Society for Threatened Peoples have launched the SIRGE Coalition as a platform to champion a Just Transition to a low-carbon economy.

The coalition is coming together out of concern of the increased demand for minerals that are essential for renewable energy, such as nickel, lithium, cobalt, and copper.

In the United States, a study by MSCI estimated that 97 percent of nickel, 89 percent of copper, 79 percent of lithium, and 68 percent of cobalt reserves and resources are located within 35 miles of Native American reservations.

In Nevada, Thacker Pass, which is sacred to Shoshone and Paitue tribal people, is under threat because of the demand for lithuim. Lithium Americas is attempting to develop a lithium mine on these lands,

he SIRGE Coalition’s primary goal is to elevate Indigenous leadership through the creation of a broad coalition and the promotion of constructive dialogue. In accordance with the United Nations Declaration on the Rights of Indigenous Peoples (UNDRIP), the coalition will uphold all rights of Indigenous Peoples, including their cultures, spiritual traditions, histories, and especially their rights to determine their own priorities as to their lands.