In a First for Tribes, Chumash Marine Sanctuary Moves Forward 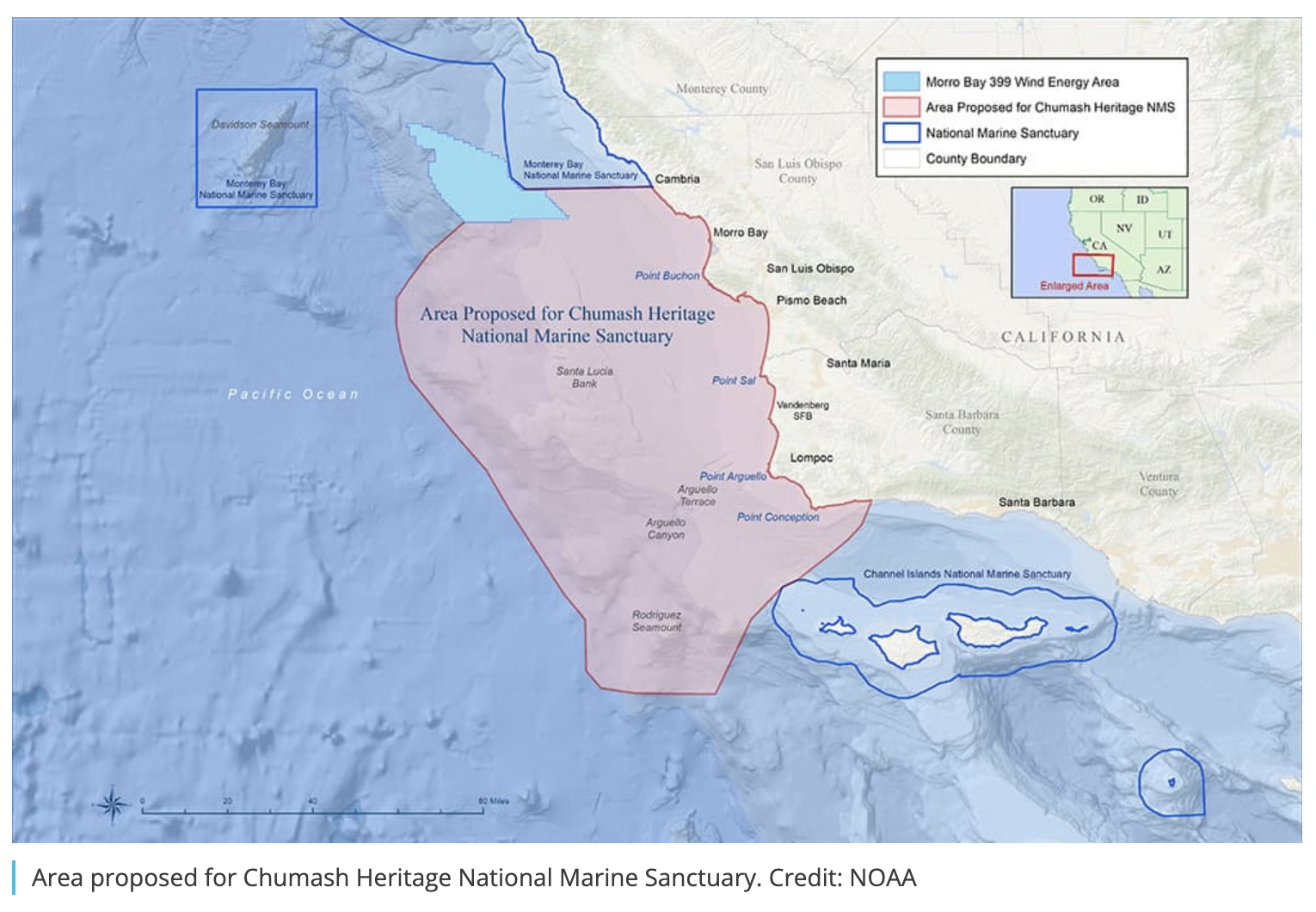 A 7,000 square mile area off the central coast of California that includes ancestral Native sites and unique biodiversity is underway to become the first tribal-led marine sanctuary in the U.S.

On Tuesday, the National Oceanic and Atmospheric Administration (NOAA)—the federal agency in charge of fisheries and marine mammal protection— forwarded the Northern Chumash Tribe’s proposal for the Chumash Heritage National Marine Sanctuary to public comment, the first step in a designation process.

The Chumash people have occupied the central coast area for more than 20,000 years, according to the Northern Chumash tribal records. The proposed site—adjacent to San Luis Obispo and Santa Barbara counties and situated between two previously designated marine sanctuaries, Channel Islands and Monterey— would protect submerged villages of tribal ancestors.

All of these are listed as reasons why the late tribal chairman, Fred Collins, fought for this designation for many years. He penned the original sanctuary request in 2015.

Now, his successor and daughter Tribal Council Chairwoman Violet Sage Walker, said the successful designation of the sanctuary will serve as a model of environmental justice.

“Today’s announcement marks a major milestone after more than 40 years of tireless advocacy for ocean protection, and also represents the first tribally nominated sanctuary in the nation,” she said. “Today my father would be proud,” Sage Walker said. “This is one of the things he wanted to see the most.”

The proposal has been met with widespread support from local lawmakers.

“The waters off the Central Coast of California are some of the most biologically diverse and ecologically productive regions in the world,” the letter reads. “Additionally, as outlined in the nomination submitted by the Northern Chumash Tribal Council, these waters are essential to the heritage of the Chumash, one of the few ocean-going bands among the First People of the Pacific Coast. Indigenous communities have always been a part of the marine ecosystem, and the Chumash people’s historical memories and knowledge are key to conservation moving forward.”

In response, U.S. Secretary of Commerce Gina Raimondo said in a statement that proposals like the Chumash Heritage sanctuary align with the Bidden-Harris administration’s goal to address climate change.

The designation aligns with the “Indigenous led, nature-based solutions to climate change” Secretary of the Interior Deb Haaland has been petitioning the worldwide need for at the United Nations Climate Change Conference of the Parties (COP26) in Glasgow.

“If we are going to be successful in tackling climate change and addressing the biodiversity crisis, we have to empower the original stewards of the land,” Haaland said during a panel discussion.

NOAA is accepting public comments online or by mail through January 10, 2022. The agency is also holding three virtual meetings to hear public input on Dec. 8, Dec. 10, and Jan. 6. To sign up or submit a comment, click here.