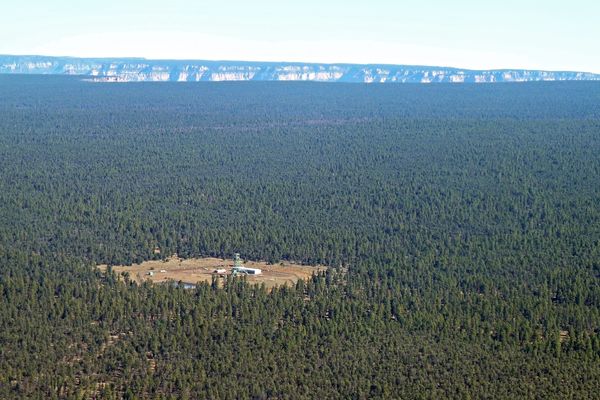 The Havasupai Tribe has been opposed to any mining activity near the Grand Canyon, where the Tribe is located, for decades.

“It is time to permanently ban uranium mining — not only to preserve the Havasupai Tribe’s cultural identity and our existence as the Havasupai People but to protect the Grand Canyon for generations to come,” Havasupai Tribal Chairman Thomas Siyuja, Sr. said in a statement. “With recent activity observed inside the mine fence, it is clear that the mining company is making plans to begin its operations.”

The Pinyon Plain Mine, formerly known as the Canyon Mine, posted job advertisements on Craigslist two weeks ago, reported the Grand Canyon Trust.

“Pinyon Plain Mine remains a shameful example of why the Grand Canyon region must be permanently protected from further mining,” Grand Canyon Trust’s Energy Director Amber Reimondo said in a statement. “For over 30 years, the Havasupai Tribe has been clear about the harm this mine causes. Yet regulators still focus only on when and how to allow it, rather than whether this uranium mine should be allowed at all.”

Pinyon Plain Mine is located in the Kaibab National Forest, near Red Butte, which is a federally recognized traditional cultural property south of the Grand Canyon National Park. The area is the homeland of the Havasupai Tribe, and the mine threatens the Tribe’s only source of drinking water. The Havasupai Tribe has led opposition to the mine since it was first approved in the 1980s.

“The Havasupai Tribe knows the irreparable damage that uranium mining can do,” Havasupai Tribal Chairman Siyuja said in a statement. “For generations, we have been at the forefront, working to permanently protect our ancient homelands from the negative impacts of uranium mining, which has disproportionately harmed and sickened indigenous people across Northern Arizona. The Senate must pass the Grand Canyon Protection Act and once and for all permanently ban any new uranium mines on our ancestral lands.”

While the passage of the Grand Canyon Protection Act would stop new mines from being developed, it would not shut down existing mines like Pinyon Plain Mine. The Havasupai Tribe and its many supporters remain committed to seeing the mine closed and cleaned up.

Uranium mining has a long history of contaminating land and water in Indian Country, including on the Navajo Nation, where hundreds of uranium mines were abandoned without cleanup. Native News Online reported in April 2022 that the U.S. Nuclear Regulatory Commission traveled to the Navajo Nation to hear of the effects of uranium mining on the reservation for the first time in history.