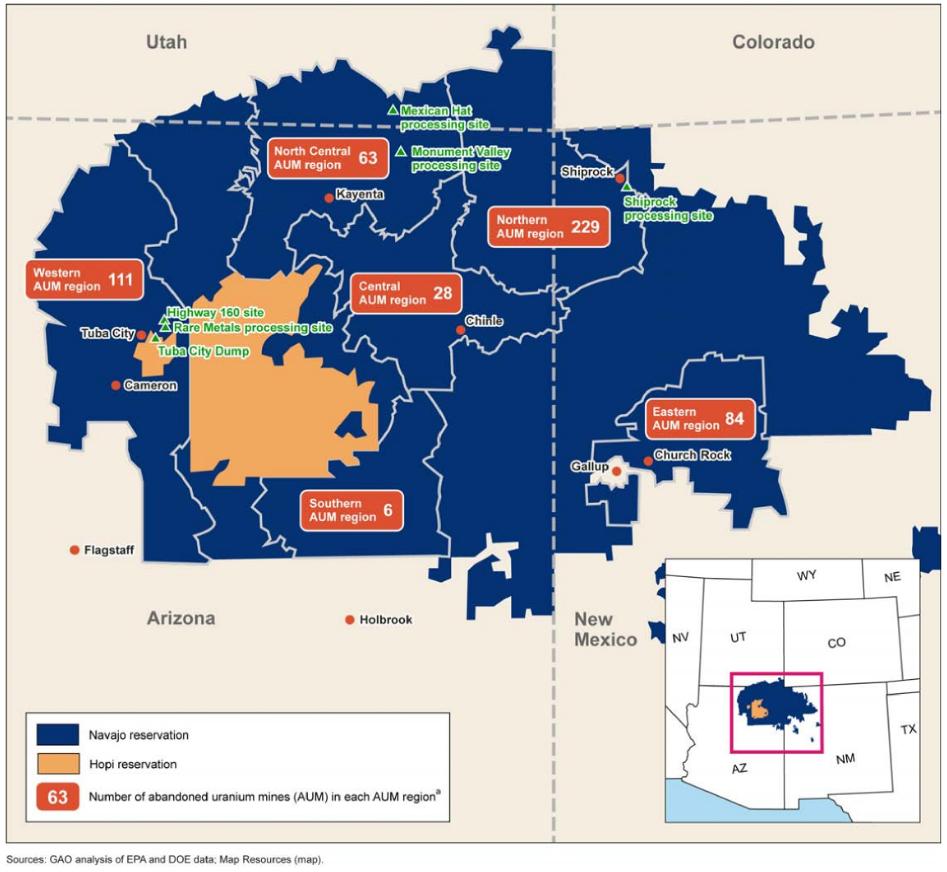 For decades, the people on Navajo Nation have had no drinking water, due to uranium mining. Today, the Eastern Navajo Diné Against Uranium Mining (ENDAUM) submitted the additional documents needed for a petition it filed in 2011 against the United States over the issue, to the Inter-American Commission on Human Rights.

In a Washington Post Live program on Tuesday, Navajo Nation President Jonathan Nez said up to forty percent of Navajo people do not have running water or electricity in their homes, including his own family.

The Navajo Nation has been disproportionately affected by the pandemic, and access to clean, natural resources inhibits many aspects of health. “The lack of water perpetuated the spread of COVID-19 on the Navajo Nation,” said Nez. This morning, he signed a proclamation supporting the ENDAUM’s Petition to the Inter-American Commission on Human Rights in Case 14.544, "seeking redress for human rights violations perpetrated by the United States related to its approval of the Crownpoint Uranium Project.”

The case, ENDAUM et al v. United States of America, seeks to hold the United States accountable for human rights violations by its acts and omissions that have contaminated and will continue to contaminate natural resources in the Diné communities of Churchrock and Crownpoint.

It is the second time that the Inter-American Commission on Human Rights (IACHR) has found an admissible case of environmental justice against the United States. IACHR is a principal and autonomous organ of the Organization of American States (“OAS”) whose mission is to promote and protect human rights in the American hemisphere.

“We will stand for our human rights and not allow our value as Indigenous people to be diminished,” said ENDAUM Director Jonathan Perry in a press release. “The federal government must realize that we are not disposable and that water is life."

According to the New Mexico Environmental Law Center, the Navajo Nation hosts 520 abandoned uranium mine sites and three uranium mill sites that are superfund sites. Superfund sites are often the source of contamination of millions of gallons of groundwater.

ENDAUM is a grassroots nonprofit organization formed in 1994 aimed at restoring and protecting the natural and cultural environment of communities affected by uranium mining in the Diné communities of Churchrock and Crownpoint. They filed the petition on behalf of the people and their concerns about proposed in-situ leach (ISL) uranium mines by Hydro Resources, Inc. (HRI), now owned by Canadian mining company Laramide Resources, Inc.

ENDAUM’s petition states that when the Nuclear Regulatory Commission (NRC) licensed Hydro Resources, Inc. (HRI) to operate uranium mining in the two Diné communities of Crownpoint and Churchrock it violated human rights guaranteed in the American Declaration of the Rights and Duties of Man, including the rights to life, health, benefits of culture, fair trial, and property.

“Much of our lands have been exploited by mining companies for profit; they left it contaminated, while doing minimal reclamation or no-one at all to this day,” said ENDAUM Co-Founder Mitchell Capitan in a press release. “In Crownpoint and Churchrock, we have rights to protect our pristine water before further damage is done like years before. Water Is Life and we will protect it for generations to come.”

A letter written by attorneys Eric Jantz and Maslyn Locke was shared with Native News Online, cited, “On July 16, 1979, the largest nuclear accident in U.S. history occurred at the United Nuclear Corporation (UNC) mill site, when the earthen dam to the pond holding UNC Mill uranium tailings was breached. The spill released over 1,000 tons of radioactive mill waste and 93 million gallons of acidic radioactive tailings solution into the Puerco River and traveled downstream through the Navajo Nation to the community of Sanders, AZ. The negative consequences of this spill are still being felt today by residents in the immediate vicinity and in surrounding communities.”

Despite these documentations, the Nulcear Regulatory Commission continues to grant licenses for uranium mining on and adjacent to the Navajo Nation.

“The Navajo Nation has a clear position opposing uranium mining and processing within the Navajo Nation in the Dine Natural Resources Protection Act of 2005; however, the United States Government continues to promote uranium extraction on and adjacent to the Navajo Nation. The ongoing assault on Dine lands, resources, and people is a violation of the Treaty of 1868, Executive Order 12898 - Federal Actions to Address Environmental Justice in Minority Populations and Low-Income Populations and inconsistent with the tenets of the Universal Declaration of Human Rights, supported by the United States.”

A hearing in Washington, D.C. will tentatively be scheduled  in the Spring of 2022.