A Tour Around Haskell and an Engaging Visit With Rep. Christina Haswood 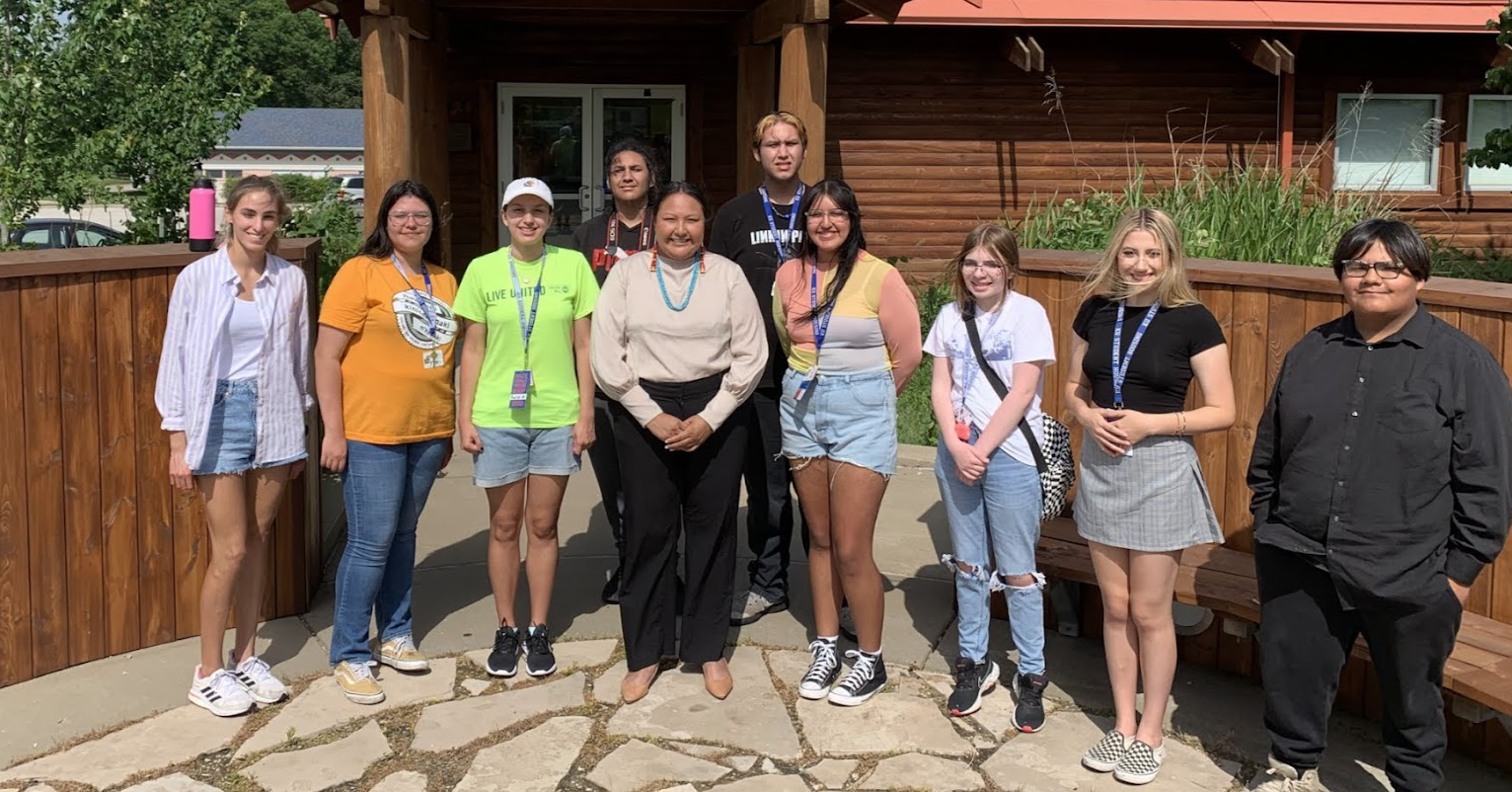 On June 15, nine students at the Native Storytelling Workshop took part in a visit to Haskell Indian Nations University. The shuttle transported the group from University of Kansas’s Stauffer-Flint Hall to the Haskell Cultural Center and Museum. Students took in the environment of the wild flowers in front of the building and the atmosphere of welcoming faculty.

Students had the opportunity to visit and interview with Kansas State Representative Christina Haswood. Rep. Haswood shared insight on what it’s like to be a young Native woman in Kansas politics and shared her advice with the students. She encouraged the students to get involved with local politics and to embrace their Native identity as they continue to progress further in life.

This article was produced in collaboration with the Native Storytelling Workshop at the University of Kansas.

After saying goodbye to Representative Haswood, students then made their way into the Cultural Center. Once inside, they were immediately greeted by the welcoming face of Travis Campbell. Campbell serves as the property specialist for the museum and is an alumni of the University. Campbell was quick to welcome the students to the museum and explain the deep-rooted history of the University. He explained in detail the creation of Haskell boarding school and the conditions in which the students lived. The students heard stories from history that they probably wouldn’t have heard anywhere else. 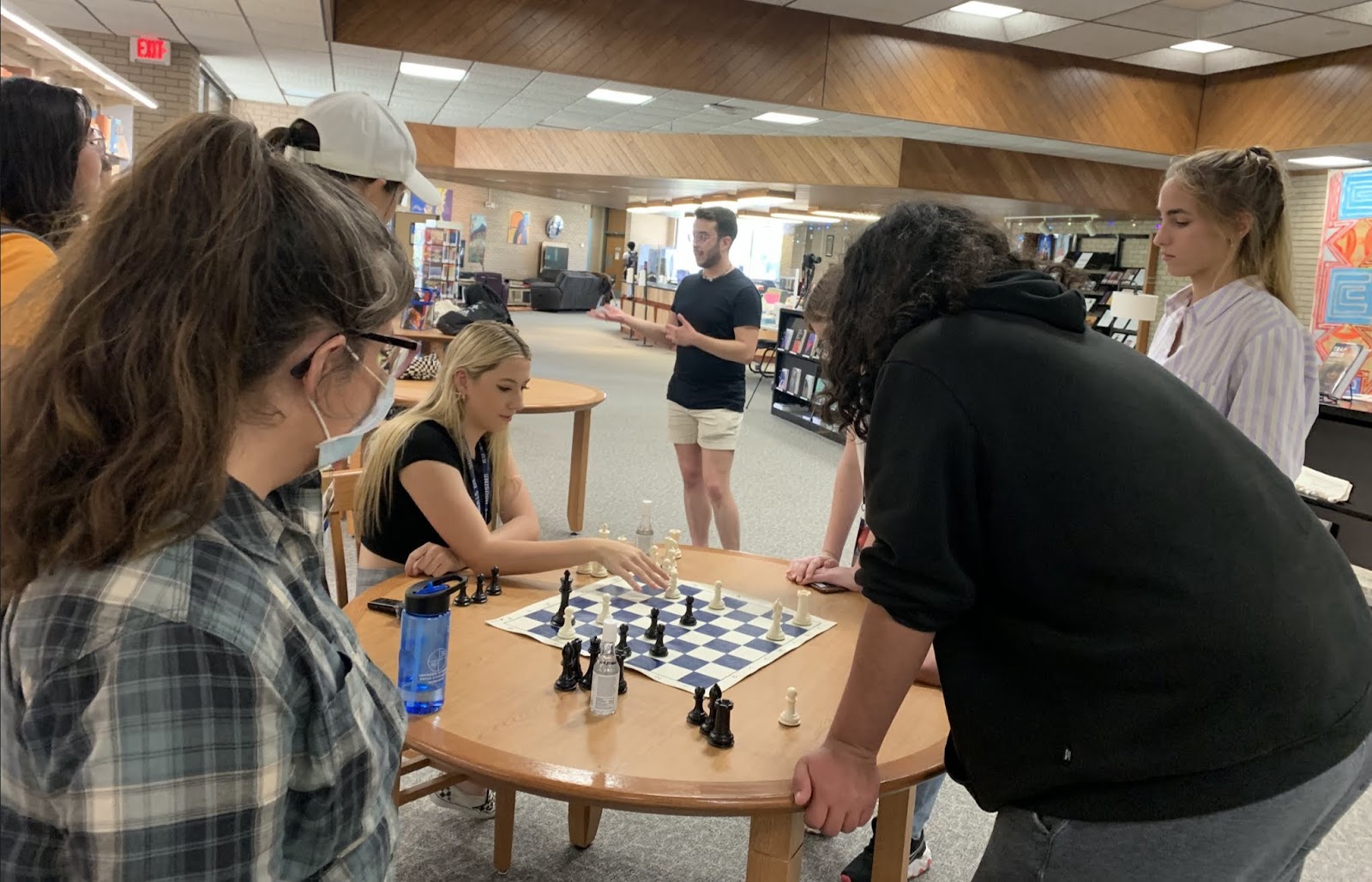 Alexandra Blye and Memphis Ridge playing chess while workshop students spectate. (Photo/Karen Middleton)
The next destination during the visit was the Tommaney Library, where students made a stop to play some games of chess and checkers. The students who didn’t partake in the game were still heavily invested and crowded around the game to watch closely.
After, the group attended a college life panel presented by Haskell students at the nearby Stidam Union. Helpful insight was shared about being a Haskell student studying journalism, as well as favorite classes, clubs and campus activities. Conversations were also held with panelists, mostly about the best places to eat in downtown Lawrence. Some of the conclusions being Ramen Bowls and The Mad Greek.
Students from the Native Storytelling Workshop made their final stop at the Haskell Campus Shop. The store was filled with Haskell swag as well as beaded jewelry. There was a wide range of styles of shirts, jackets and sweatshirts. The time in the store was well-spent as the group took some time to carefully decide what piece of Haskell they would bring home with them. As well as buying clothes for themselves, some bought clothing for the family. The stop at the campus store was a good break for the students to take some time for themselves and talk about a possible future at Haskell Indian Nations University.

“After walking around the campus I felt like it was a welcoming community,” Karen Middleton, a member of the workshop, said at the end of the visit. “The prospect of being around other Native students is also a reason why I could see myself going to Haskell.”

Georgia Blackwell, Kickapoo Tribe of Kansas, Prairie Potawatomi Tribe of Kansas, and Cherokee Tribe of Oklahoma, is from Kansas. She enjoys writing and playing her viola; she loves working with other Natives and journaling at the Native Storytelling Workshop.

Karen Middleton is (Kickapoo Tribe of Kansas), who photographed this piece, is from Kansas. She enjoys making content and says the Native Storytelling Workshop offers a way to learn more about Native journalism and how podcasts are made.