With North Carolina Up for Grabs, Trump and Biden Support Federal Recognition for Lumbee Tribe 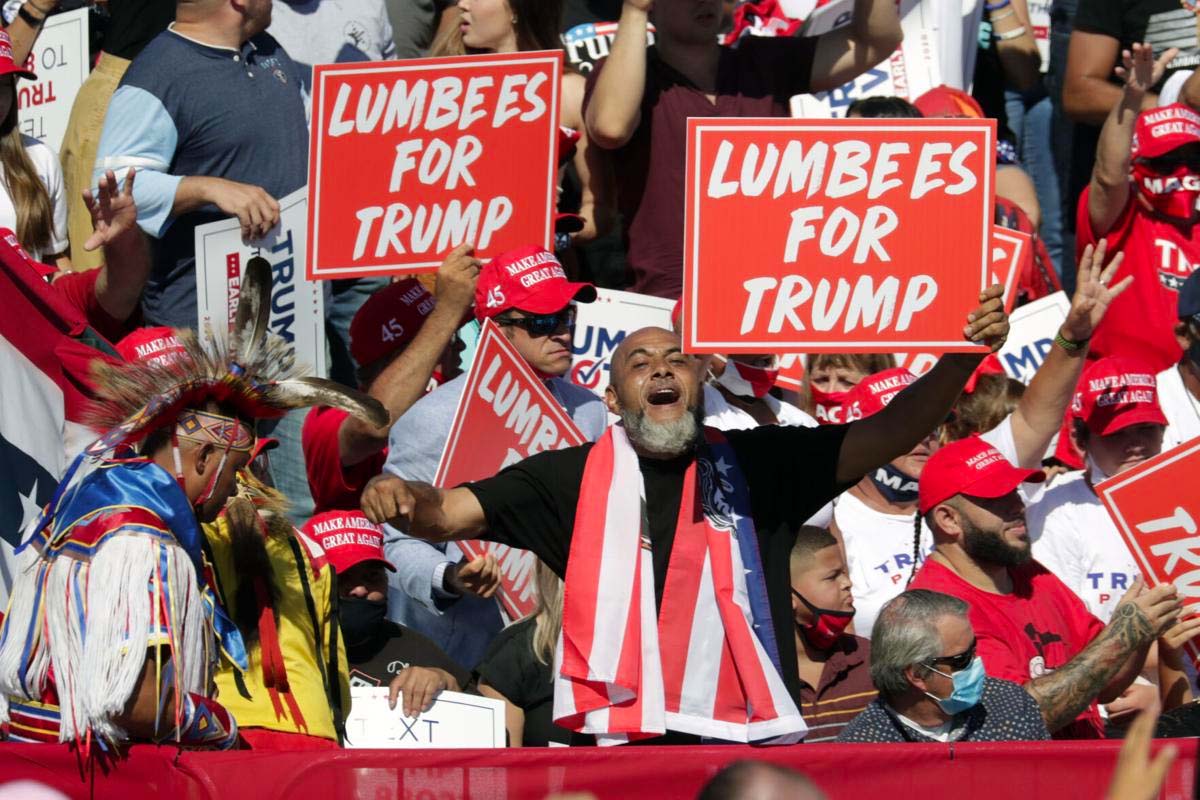 Within days of each other earlier this month, Vice President Joe Biden, followed by President Donald Trump, announced their support for federal recognition for the Lumbee Tribe in North Carolina, which has been pushing to be federally recognized for more than 100 years.

“We're very encouraged. We understand that it is political season, but we're very encouraged to have [candidates] on a national level talking about our bill,” said Danielle McLean, who serves as legal and compliance officer for the Lumbee Tribe and has been involved in their federal recognition process. “We’re very hopeful this will give us some momentum to finally get across that finish line.”

Just days after the two candidates announced their support for federal recognition, House Majority Leader Steny Hoyer (D-Md.) announced that the House will be voting on the Lumbee Recognition Act, a federal bill that would provide Lumbee tribal members with access to services and benefits available to members of federally recognized tribes, on Nov. 16.

Although this may be the push the tribe needs to gain federal recognition, members of the Lumbee are also keenly aware that these announcements come now that the two presidential candidates have mounted last-ditch efforts to win a closely contested race in North Carolina. Trump won the state in 2016 with almost 50 percent of the vote, compared with Clinton’s 46 percent, but as of this writing, the numbers appear to be flipped this year, with Biden polling at 49 percent and Trump at almost 47 percent.

In a statement released by Lumbee Tribal Chairman Harvey Godwin Jr., he called the support from Trump and Biden “deeply meaningful to our people, who have suffered without federal recognition for too many generations,” he said. “It is an honor in 2020 to have the support of both presidential candidates for the long overdue formal recognition of our tribe.”

In an effort to boost his polling numbers in the state, Trump has visited North Carolina eight times since accepting the Republican nomination in August. The Lumbee Tribe has emerged as a critical swing group, having voted for Trump in 2016 after consistently supporting Democrats. Chairman Godwin told WBUR he thinks this is because many members of the tribe are devout Christians, a group that supported Trump in 2016.

Because the Obama administration supported federal recognition in 2009 and never made it happen, many Lumbee are hesitant to support Biden. “Joe Biden and the Past Obama Administration had 8 years [sic] to get this done. Never have they kept their word on anything related to Our Tribe [sic]. President Trump has kept his word on promises made. I believe he will get it done,” Sara N. Ervin (Lumbee) said in a Facebook message.

Others trust Trump because of his background outside politics. “I'm not sure if it's the political stuff for both, but President Trump comes from business. He was a businessman before he was a politician, so he has absolutely nothing to lose to support the tribe becoming federally recognized,” said Lanie Oxenide, who’s part Cherokee but is married to a Lumbee man. Oxenide added that Biden’s long history in politics signals to her that he has trouble building support for this issue and others on both sides of the aisle.

To counter this narrative, members of the Lumbee Tribe collectively penned a statement endorsing Biden for president. The letter noted the Biden-Harris Plan for Tribal Nations, which will address many concerns facing the Lumbee Tribe specifically and Indian Country generally.

However, others acknowledge that this bipartisan support increases the likelihood of federal recognition. “I’m excited that both have considered endorsing, so that shows unity in both parties, bipartisan support on both sides,” Spencer-Marshirl Locklear (Lumbee) said. “I’m excited about that, that brings even more recognition too from their supporters. On the flip side,  I understand both parties will reach out into areas that they normally don't reach. So, you know, sort of excited but then concerned.”

The Eastern Band of Cherokee Indians, a federally recognized tribe in North Carolina, condemned this endorsement of federal recognition, having fought it since the Lumbee claimed Cherokee ancestry during the federal recognition process. “The big rub for us was that they initially claimed to be Cherokee,” said Chief Richard Sneed (Eastern Band of Cherokee Indians). “My grandfather was chief… when he was a council member, they fought this fight.”

Sneed said the Lumbee have changed their backstory over the years, and don’t have a legitimate claim to federal recognition. “At the end of the day, the American taxpayer is going to be footing the bill for this thing, so the fact that Congress is ignoring the process that they approved through the Office of Federal Acknowledgement, and instead are essentially flexing their political muscle and saying, ‘well, we have the authority to grant recognition,’ it's once again the government breaking its promises to legitimate tribes,” he said.

Oxenide calls comments like these that question the legitimacy of the Lumbee Tribe “hard to swallow” because even though “some people say it’s because they don't have their own language, some people say it's because they were not an actual tribe until so-and-so date, but they've been in the same place for as long as the state's been here,” she said of the Lumbee Tribe.

The Lumbee Tribe, however, is hopeful for federal recognition with the support from both candidates, along with all the benefits that status confers. Locklear said he’s hopeful for more support for health care, agriculture and education, along with a “seat at the table [to] work with all these other departments and try to find out what our people need and how we can address it,” he said.

Oxenide was already planning to vote for Trump, in part because of his outsider status and positive impact on the economy. Now that the president is promising to federally recognize the Lumbee Tribe, it’s “the icing on the cake,” she said.