Where Native Americans in Congress Stood on Trump’s Impeachment 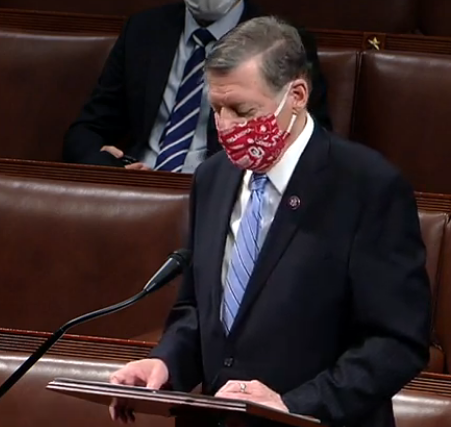 WASHINGTON — In the aftermath of the worst attack on the U.S. Capitol since the War of 1812, Congress voted to impeach President Donald J. Trump on Wednesday. Trump became the first president of the United States in history to be impeached twice.

As they did last week to certify the electoral college tallies, the six Native Americans serving in the 117th Congress cast their votes down party lines on Wednesday on whether to impeach Trump.

The final House tally had 232 members vote for impeachment, with 197 votes against the resolution and four abstentions. Ten Republicans voted for impeachment.

In the end, the yea votes for the objections were rejected by the House of Representatives.

Here is how Native American members of Congress voted on the objections:

In his role as the Republican leader of the House Rules Committee, Cole voiced his opposition to impeachment on Wednesday morning as the one of the first speakers and as the day-long debate commenced. He termed the proceedings as a “snap impeachment.”

“I would note that there are other remedies that can be pursued. The president is expected to face litigation over his role in last Wednesday’s events. There will be criminal proceedings against the perpetrators, and I hope all those who stormed the Capitol will be brought to justice. And some members have proposed an alternative procedure, censuring the president, which could garner significant bipartisan support in the House,” Cole said.

Here are statements by Native American members of Congress:

“After the terrifying and traumatic attack that took place at the United States Capitol just a week ago, the American people desperately need to see hope and healing on our nation’s horizon. Impeaching President Donald Trump, who has conceded the election and will leave office in a week, is not the answer. Doing so will only worsen divisions nationwide.

While I realize that emotions are running high and fear is a very real enemy right now, that does not provide cause for the House to abandon the institutional process for bringing the grave matter of impeachment to the floor. Such serious action should only come after fully reviewing and investigating all the facts, engaging expert witnesses and providing due process to the accused. This is necessary to ensure the American people have confidence in the procedures that govern the House now and for generations to come. Moreover, the presidency itself demands due process in impeachment proceedings.

To be clear, the shameful perpetrators of the Capitol siege must and will be held accountable for their crimes and prosecuted to the fullest extent of the law. Indeed, the president must also realize that his words carry meaning and accept responsibility for them. I hope that is a lesson every elected official remembers.”

“The attack on our nation’s Capitol last week was a direct attack on our democracy, and we have a president who not only condoned but encouraged it. Donald Trump has made it clear that he is unfit to serve as president of the United States. Moreover, he is a clear and present danger to our safety, security, and democracy.

“Today, I fulfilled my constitutional duty and voted to impeach Donald Trump. It’s my sincere hope that members of the Senate will put their country first and join us in removing him from office, as some Republican members of the House did today. Because while this is about removing a clear and present danger from the White House now, it’s also about 100 years from now and the precedent we set. We must make it clear that this president's actions will not be tolerated – not now, not ever – and that he won’t be allowed to stand in the way of our democracy any longer.

“Before we can move forward and begin to heal as a county, we need full accountability for those responsible for these attacks that resulted in five people dead, including a Capitol Police Officer, and many more injured. There are multiple ongoing investigations into the tragic events that occurred, and I remain committed to ensuring that every person who played a role in this insurrection is held accountable.”

“Calls for unity and a peaceful transition of power ring hollow while articles of impeachment are being drafted.

“That is why I will vote against any effort to remove the president from office this week. Doing so will not heal our country, bridge our partisan divides, give Americans hope or bring us together. It would only make things worse.

“With just days until President Trump leaves the White House, and just days into the new Congress, we have more important things to do right now. We should be working to provide the resources families and small businesses need to get through the pandemic, hold Big Tech accountable for their unfair policies, and restore trust in the security of our elections. The Republic will endure, but the freedom we hold dear requires vigilance against threats from all extremes.”

Haaland and Kahele did not release statements. Mullin’s congressional office released a video of the congressman talking about a time to heal.