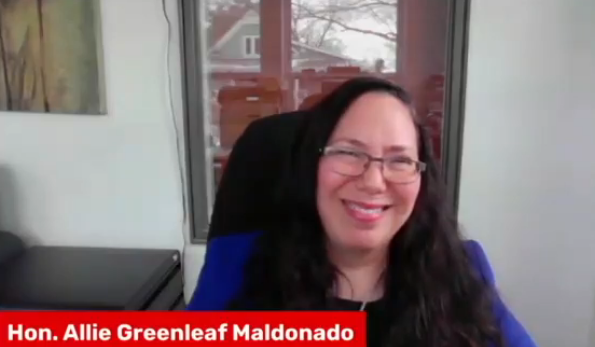 Respected throughout Indian Country for her work in Indian law, Maldonado is a citizen of Little Traverse Bay Bands of Odawa (LTBB). She is a University of Michigan Law School graduate and currently serves as the Chief Judge of LTBB’s Trial Court. She has also served as the pro tem judge for the Saginaw Chippewa Indian Tribe, Little River Band of Ottawa, and the Sault Ste. Marie Tribe of Chippewa.

During her remarks accepting the appointment, Maldonado expressed her gratitude to Governor Whitmer. And, she thanked the Little Traverse Bay Bands of Odawa Indians, the Sault Ste. Marie Tribe, the Saginaw Chippewa Tribe of Michigan, the three tribes where she has served a judge on their tribal courts.

“But what fills me with the most gratitude is that because of this moment, the next seven generations of tribal children, they won’t have to look down before they dream up,” Maldonado said.

Rickert asked Maldonado what her message to Native youth is beyong her "dream up" remark.

"For me, I really didn't have an example to look to be a lawyer, never mind being a judge, and so I never really never wrapped my mind around this beign a possibility," Maldonado said. "What I want to say is find your mentors. Find the people that in your community, and even those who aren't that can help you."

Makdonado also spoke of her grandmother who attended Indian boarding schools and the impact it left on her family.