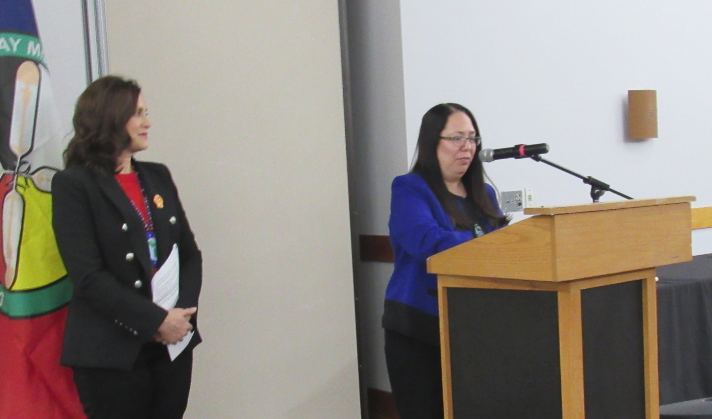 SAULT STE. MARIE, Mich. – Judge Allie Greenleaf Maldonado (Little Traverse Bay Bands of Odawa Indians) was introduced by Michigan Governor Gretchen Whitmer as the next justice to the Michigan Court of Appeals on Tuesday at the conclusion of the 2022 State of Michigan Tribal Summit.

Maldonado expressed her gratitude to Governor Whitmer. And, she thanked the Little Traverse Bay Bands of Odawa Indians, the Sault Ste. Marie Tribe, the Saginaw Chippewa Tribe of Michigan, the three tribes where she has served a judge on their tribal courts.

“But what fills me with the most gratitude is that because of this moment, the next seven generations of tribal children, they won’t have to look down before they dream up,” Maldonado said.

Then she concluded with: “To my grandma, and to all the children that were in boarding schools, this is for you.”

NCAI Treasurer and President of the Stockbridge-Munsee Band of Mohican Indians Shannon Holsey: “Justice Allie Greenleaf Maldonado’s historic appointment to the Michigan Court of Appeals—the first Native to serve on that court—is long overdue and happens at a critical time when courts across the nation are attacking tribal sovereignty, tribal families, and tribal jurisdiction. Judge Maldonado will not only bring her legal experience to the bench, but she knows what it means to be a tribal citizen and a tribal judge, and her voice will be invaluable on the issues that come before the court.”

NARF Executive Director John Echohawk (Pawnee): “More and more often, state courts are hearing cases that involve Native American tribes. Judge Maldonado’s extensive knowledge of tribal status and related legal principles will be of great benefit to the judiciary of Michigan, a state that is home to 12 federally recognized tribes and the largest Native American population east of the Mississippi.”

NNABA Board President Phil Brodeen (Bois Forte Band of Chippewa): “It is said in many Indian communities that the actions of today will impact the next seven generations. The appointment of Judge Allie Greenleaf Maldonado will assuredly prove this teaching true. Judge Maldonado’s historic appointment helps pave the way for the appointment of more Native Americans to state and federal judgeships. Chi-Miigwech Judge Maldonado.”

Judge Maldonado possesses substantial and broad judicial experience that will make her an excellent state appellate court judge. As the Chief Judge of the Little Traverse Bay Bands of Odawa Indians Trial Court for the last ten years, Maldonado presided over an extensive range of cases. She established a tribal drug court that serves as a model for similar programs nationwide. She is recognized for her expertise on the Indian Child Welfare Act and is well known for consensus building. In fact, she was an inaugural co-chair of the Tribal State Federal Judicial Forum at the Michigan Supreme Court.

She will assume her responsibilities on the Michigan Court of Appeals on January 9, 2023.