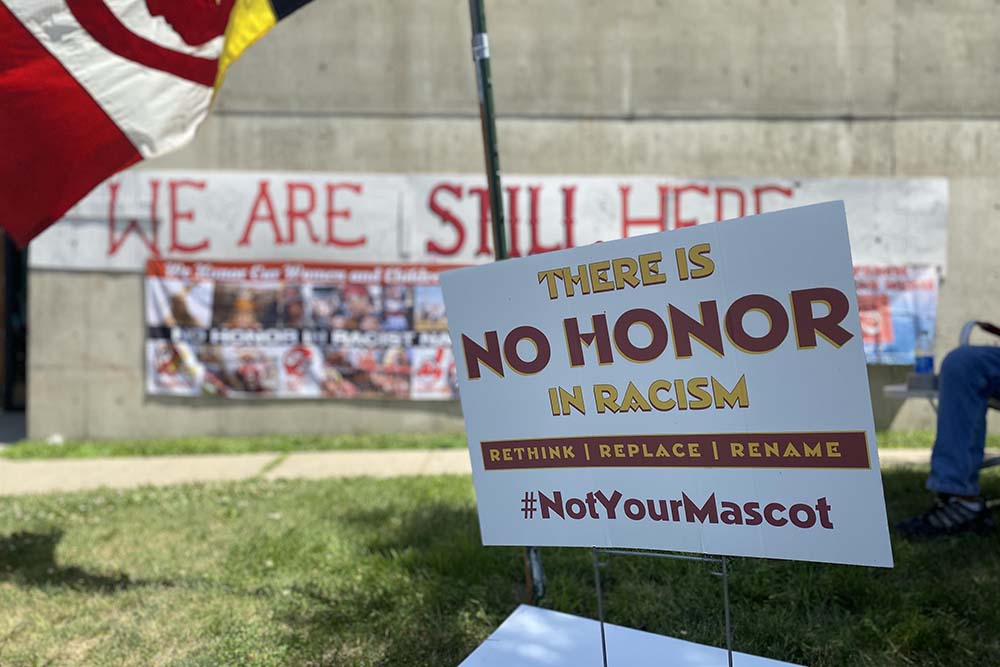 WASHINGTON — The Washington Football Team on Monday announced that its new team name, and associated imagery, will have no reference to Native American imagery, names, or culture.

The announcement came a year after Washington announced it would be dropping its “Redsk!ns” name and logo on Washington’s website, after years of criticism by Native leaders, allies, and organizations. The Washington National Football League’s team  hasn’t officially made a decision on its new team name, but the announcement is seen as a step in the right direction.

“A year ago, they gave in to the reckoning and dropped the ‘R’ word,” Suzan Shown Harjo said to Native News Online. “So, after a year of listening to us, the consensus has been, ‘leave us alone and move on from using Native imagery.’” Harjo is Cheyenne and Muscogee Creek and winner of the Presidential Medal of Freedom for her service to Native people. In 1992, she petitioned the United States Patent and Trademark Office’s Trademark Trial and Appeal Board (TTAB) to cancel the trademarked image and name used by the Washington Redsk!ns football team. The claim cited that the name was disparaging to Native Americans.

“What Washington has done with a name is a desecration and beyond insulting,” said Harjo. “But changing and committing to it a year later is part two of the reckoning. Great!”

Last year, Native News Online reported that Washington’s decision to drop its former team name was celebrated by many in Minneapolis, including the National Coalition Against Racism in Sports and Media and Minnesota Lieutenant Governor Peggy Flanagan, also a member of the White Earth Ojibwe.

“This is the first step of many,” said Minnesota Lieutenant Governor Peggy Flanagan in a press conference at the Minneapolis American Indian Center on July 13, 2020. “There are many more teams to go and this reaches far beyond sports teams and mascots. These images that we see—even in the capital of the State of Minnesota—keep us stuck in the past and do not acknowledge the leaders that function within that building and who reflect the communities they represent.”

After Washington dropped its name, it pledged to conduct extensive efforts on selecting the team’s name by listening and learning from Native American leaders and individuals throughout the country. “Warriors” was a suggested name and considered a contender, but Washington’s team president wrote that it would not be considered, citing conversations with various communities.

“As we learned through our research and engagement with various groups, ‘context matters’ and that makes it a ‘slippery slope,’” wrote Washington Football Team President Jason Wright on the team’s website. “Feedback from across communities we engaged clearly revealed deep-seated discomfort around Warriors, with the clear acknowledgment that it too closely aligns with Native American themes.”

“It's no secret why we began this journey of finding a new brand identity,” wrote Wright. “We will choose an identity that unequivocally departs from any use of or approximate linkage to Native American imagery.”

Although a reckoning has come to Washington, it hasn’t come to those behind the efforts to pressure the Washington Football Team to change its name, the “Redsk!ns.”

Prior to the change, Suzan Harjo led seven individuals in the petition to cancel the trademarks owned by Pro-Football, Inc., owner of the Washington Redsk!ns. The Trademark Trial and Appeal Board ruled in favor of Suzan Harjo and the other Native American petitioners, but the case was later dismissed by the U.S. Court of Appeals (DC Circuit) on the grounds that the doctrine of laches applied, where the plaintiffs waited too long after reaching the age of majority (18) to file their petition for cancellation.

So, Amanda Blackhorse filed a similar petition in 2006 against the United States Patent and Trademark Office’s Trademark Trial and Appeal Board with five other individuals aged 18-24 hoping to overcome the doctrine of laches. The Blackhorse case resulted in the cancellation of six “Redskins” federal trademarks by the TTAB in 2014.