As Indian Country Rejoices Over Washington Team Name Change, Leaders Remind Us: “This is the first step of many.”

MINNEAPOLIS — On Monday afternoon, Clyde Bellecourt, one of the co-founders of the American Indian Movement (AIM), was on hand at a press conference to react to the news that Washington DC’s professional football team officially announced that it would be parting ways with its team name of more than 87 years—the “Redsk!ns.” 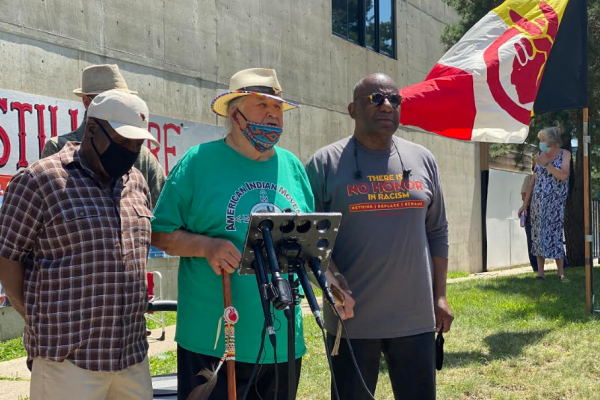 Bellecourt, 84, started the conference and addressed the decades-long fight against sports team names and mascots.

“Today goes down in history as a good day to be Indigenous,” said Bellencourt, a member of the White Earth Band of Ojibwe. “But one thing we found out in the last few weeks is the only team that matters is money.”

Minnesota Lt. Gov. Peggy Flanagan has been a longtime supporter of dropping Indian imagery in sports.

Minnesota Lieutenant Governor Peggy Flanagan addressed the media after Bellecourt’s opening and shared smiles, hope and encouragement, acknowledging there is much more work to be done.

“When you don’t acknowledge that we are a contemporary people who are still here, who are very much alive and who will always be here, the policies you pass, the things you do to us and not with us, can be pushed aside,” said Flanagan, also a member of the White Earth Band of Ojibwe.

“This is the first step of many,” Flanagan continued. “There are many more teams to go and this reaches far beyond sports teams and mascots. These images that we see—even in the capital of the State of Minnesota—keep us stuck in the past and do not acknowledge the leaders that function within that building and who reflect the communities they represent.”

“We have been fighting this fight for a very long time,” said Rebecca Crooks-Stratton, Secretary/Treasurer of the Shakopee Mdewakanton Sioux Community. “It’s just one small step with a long way to go.”

The Shakopee tribe and the Mille Lacs Band of Ojibwe co-sponsored a television advertisement during the November 2, 2014, Minnesota-Washington NFL football game about Washington team’s name. The ad, titled “Proud to Be,” was created for the Change the Mascot campaign.

Although today’s name change is being rejoiced by many, the goal to end all Native-themed mascots and imagery isn’t over until all are changed, according to Lisa Bellanger, executive director of the Grand Governing Council of the American Indian Movement. 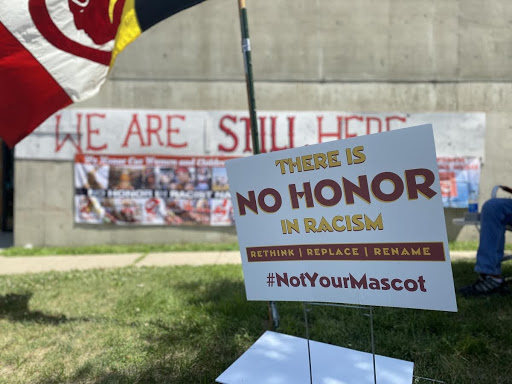 “The ‘Change the Mascot’ movement started in Minneapolis through the youth of the American Indian Movement,” Bellanger said. “They will continue to push for other teams and will soon launch a national initiative.”

The National Coalition to End Racism in Sports and Media is a focused committee of the American Indian Movement, which started in Minneapolis in 1968. The National Coalition Against Racism in Sports and Media has organized protests against team names since its inception and most significantly was when Washington played in Minnesota in 2014. That protest drew an estimated 5,000 people, which was the largest protest in sports history.

“This name change is a huge step in the right direction, but it’s important to keep the momentum going. I hope other sports teams take this as an example and soon follow suit to show respect for Indigenous peoples and their culture,” said Sequoia Dreaming-Elk, Pascua-Yaqui Youth Representative of the Grand Governing Council of the American Indian Movement.

“We should be the ones who share our culture with the world, not sports,” says Crooks- Stratton.

“It’s a good day to be Indigenous,” says Flanagan. “We celebrate today. Tomorrow we keep fighting so that our children and our children’s children will be told the truth of who they are.”

Washington’s team remains nameless, with a new name to be announced in the near future according to a statement by the team.