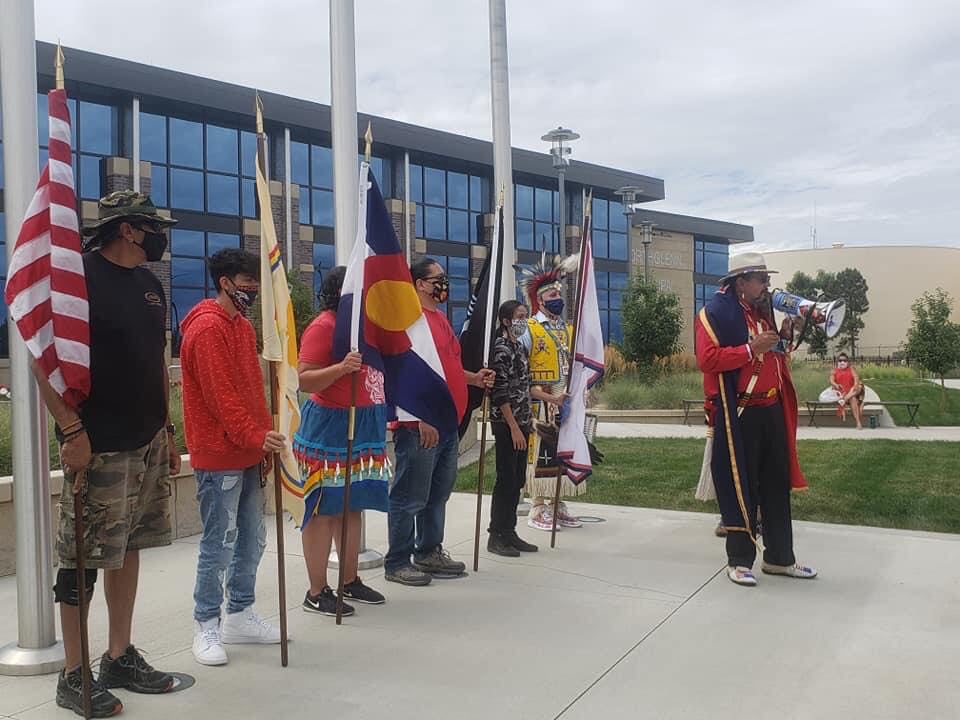 DENVER, Colo. – Gerald Montour is still seeking justice for the theft of two nation flags – the Diné (Navajo) Nation flag and the Cheyenne River Sioux Tribe flag – that were stolen from the front porch of his and wife Linda’s home in Northglenn, Colo., a northern Denver suburb, over the July 4th weekend.

Gerald is Diné and Haudenosaunee; his wife is a tribal citizen of the Cheyenne River Sioux Tribe.

Upon returning from a short trip to the mountains, the couple discovered the tribal flags and an upside-down American flag were missing. The couple’s Ring doorbell camera captured a man in a pickup truck pulling up to their home and stopping. The man got out of his truck and walked up to the flags and stole them. On his way back to his truck with the stolen flags, he turned and hit their door with the flag poles.

But before leaving, the man turned toward the house and shouted obscenities.

With the help of a neighbor who took down the man’s license plate number, police identified the man as Jimmy Nichols, 59, from Erie, Colo. After a short telephone interview with Nichols they charged him with two misdemeanors for theft and criminal mischief.

Montour, a Vietnam-era veteran, says those charges are not severe enough.

He organized a March for Justice on Sunday to get the Northglenn Police Department to do a more thorough job of investigating Nichols.

Some 90 people came out to show solidarity with the Montours. The march was from a local park near their home to the Northglenn Justice Center, the home of the police department and municipal court.

“They were out talking to me and within 30 minutes they called me back and told me they were charging him with the two misdemeanors. I want them to do a thorough investigation. He should be charged with a hate crime or ethnic intimidation,” Montour said.

The police say Nichols, the owner of Camo Construction in Erie, Colo., can’t be charged with a hate crime or ethnic intimidation because he denied knowing who lived in the house and did not see what the tribal flags represented because they were not flying but were furrowed.

In an interview with Native News Online on Monday, Nichols repeated what he told police and denied knowing the meaning of the flags.

“My brother lives in the neighborhood. I pick him up for work every day and I got mad because the American flag was upside down. I didn't even know what those other flags were so it cannot be a hate crime,” Nichols said.

Nichols burned the tribal flags and handed over the American flag to the Northglenn Police Department.

Montour said he had the American flag upside down because right now the country is in trouble because of COVID-19, treaties not being honored and the atrocities still being done against brown people.

“I am a man of God and would apologize for what I did,” Nichols said.

He said he has a court date in either late September or early October.