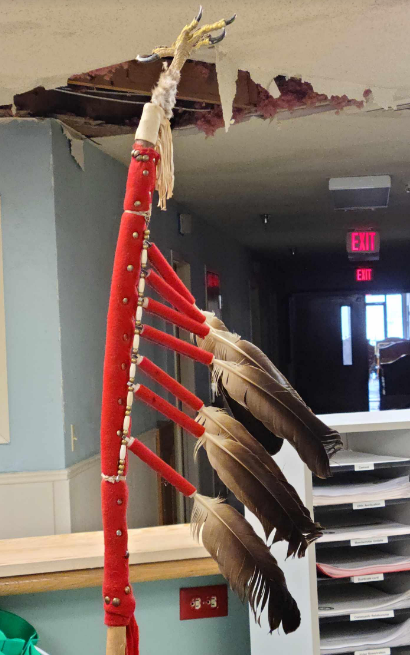 According to a statement issued late Tuesday night, the roof is already being repaired, and the debris is being cleaned up, but the building is in need of a new air unit and large fans that can be used once the electric power is restored.

Lanor Curole, administrator for the tribal nation, told Native News Online that several staff members of the tribe have been staying at the tribal headquarters, a former nursing home that was donated to the United Houma Nation earlier this year.

Only about a third of the building is usable at this time, according to Curole. The facility is currently being used as a staging area for relief efforts in the coastal tribal communities.

Chief August Creppel told Native News Online on Tuesday night the tribe is still in the process of assembling the information on casualties and injuries to tribal citizens. The process has been hampered by the lack of electricity, cell phone signals and internet.

Curole said the high winds from the hurricane lasted for several hours.

The tribe has received large donations of water and toiletries from various groups, but they are in desperate need of tarps to distribute to residents and building supplies such as lumber and nails to help restore and rebuild homes damaged by Hurricane Ida.

Curole is coordinating relief efforts for the tribe and is accepting all donations on behalf of the tribe. She can be reached at 985-696-8899. For more information on the United Houma Nation, visit www.unitedhoumanation.org.