WASHINGTON — President Donald Trump on Monday weighed in on Twitter about two professional sports teams that are reviewing their names in wake of increased racial justice momentum across America after the death of George Floyd.

The president tweeted: “They name teams out of STRENGTH, not weakness, but now the Washington Redsk!ns & Cleveland Indians, two fabled sports franchises, look like they are going to be changing their names in order to be politically correct. Indians, like Elizabeth Warren, must be very angry right now!”

His tweet comes after Friday’s announcement by the Washington National Football League (NFL) team that the team had started a thorough review of their name, which American Indians consider a slur and have worked for decades to change. The decision to conduct a thorough review came after the team’s corporate partners including FedEx and Nike called for the name change. 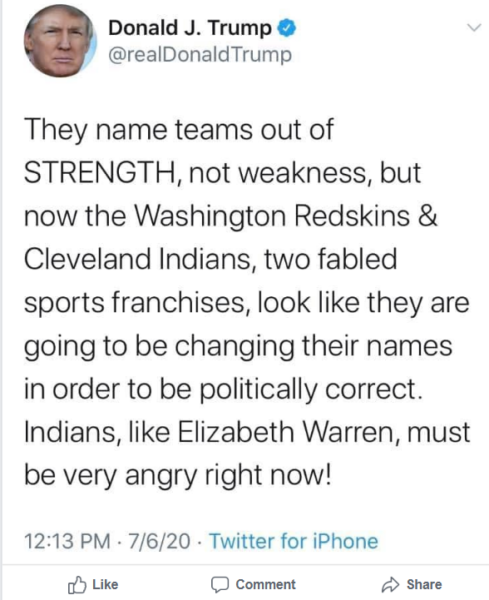 Then later on Friday, the Cleveland Indians, a Major League Baseball (MLB) team, announced they too were reviewing their name.

“We are committed to making a positive impact in our community and embrace our responsibility to advance social justice and equality,” the Cleveland Indians said in a statement.

The president’s mention of Sen. Elizabeth Warren (D-Mass.) follows his pattern to criticize the senator for claims her family had American Indian ancestry. Trump has for years mocked Warren by calling her “Pocahontas.”

While the president appears to think American Indians find the review process offensive, Native American advocates such as the National Congress of American Indians (NCAI) praised the movement towards changing the name of the Washington franchise.

“We are encouraged by the Washington NFL team’s announcement that it will conduct a ‘thorough review’ of the team’s name and mascot,” NCAI President Fawn Sharp said in a statement. “This moment has been 87 years in the making, and we have reached this moment thanks to decades of tireless efforts by tribal leaders, advocates, citizens, and partners to educate America about the origins and meaning of the R-word.”