Trump and Biden are Peddling Nostalgia, and That's a Problem 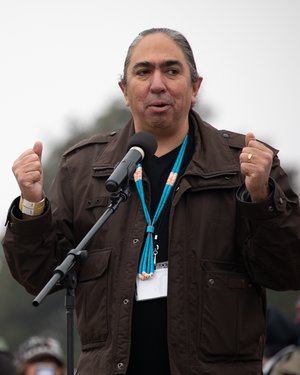 Last month, in the middle of the COVID-19 global pandemic which is causing one of the greatest economic recessions (potentially depression) our nation has ever seen, President Trump’s Secretary of the Interior sent a letter to the Mashpee Wampanoag nation in Massachusetts informing them that their reservation was to be disestablished. The Mashpee are a federally recognized tribe, and their reservation lands had been approved in 2015 during the Obama Administration. The timing of this order is akin to giving someone an eviction notice while their neighborhood is being ripped apart by a tornado. It was an outrage by the Trump Administration and one which many people decried, including the Democratic front-runner Joe Biden, who wrote the following in a statement posted on Medium:

This past weekend, in the midst of a pandemic, the Trump Administration chose to expend effort and resources to attempt to remove land that the Obama-Biden Administration put into trust for the Mashpee Wampanoag Tribe and disestablish the Tribe’s reservation — before the Tribe had exhausted its ability to appeal in the courts. This is unacceptable and betrays an incredible disrespect for Mashpee rights.

On the surface, Vice-President Biden’s statement appears to be about right versus wrong (along party lines of course). “Mean old Republican President Donald Trump is taking reservation lands away from the poor Native tribe. A reservation that the kind-hearted Democrats, led by Joe Biden, benevolently established for them.” However, this statement does not acknowledge the unjust history and policies regarding reservations, which are lands held in “trust” by the federal government on behalf of Native tribes. A fuller understanding of that injustice can be seen if you read carefully the next part of Joe Biden’s statement.

One of the most important roles the federal government plays in rebuilding the nation-to-nation relationship is taking land into trust on behalf of tribes. It is critical for tribal sovereignty and self-determination.

Do you see the problem? If not, please read those two sentences again. But this time replace the word “tribes” with the name of one of our allies such as Canada, Britain, France or Germany.

One of the most important roles the federal government plays in rebuilding the nation-to-nation relationship is taking land into trust on behalf of Britain. It is critical for British sovereignty and self-determination.

Do you see the problem with such a lopsided understanding of a “nation to nation” relationship? If still no, try reading the sentences again, this time with the subject and object reversed.

One of the most important roles the tribes play in rebuilding the nation-to-nation relationship is taking land into trust on behalf of the United States Federal Government. It is critical for US sovereignty and self-determination.

Dehumanization is the problem. In an 1823 Supreme Court opinion (Johnson v. M’Intosh) written by Supreme Court Chief Justice John Marshall, land titles are based on “discovery.” He justified this by writing that “the tribes of Indians inhabiting this country were fierce savages” and “to leave them in possession of their country was to leave the country a wilderness.” Later, the Doctrine of Discovery is specifically referenced by SCOTUS and used to determine that even though Native tribes were here first, but because we are “savages”, we are mere occupants of the land while white European/Americans are the “discoverers” of the land and therefore hold the true title.

It is especially at the level of the Supreme Court that the two major political parties agree the most. In a SCOTUS opinion written in 2005 by Ruth Bader Ginsburg (City of Sherrill v. the Oneida Indian Nation of N.Y.), the Doctrine of Discovery is referenced in the first footnote. Justice Ginsberg then referenced the same savage/wilderness argument used by Chief Justice John Marshall when she wrote “the Oneidas sought to regain ancient sovereignty over land converted from wilderness to become part of cities like Sherrill”. She also reached a similar conclusion when she stated that these arguments precluded the Oneida Indian Nation from “rekindling embers of sovereignty that long ago grew cold.” (Also see TEDx Talk by Mark Charles: 'We the People' - the three most misunderstood words in US history)

The “nation to nation” relationship that exists between the United States Government and Native Nations of Turtle Island is rooted in the Doctrine of Discovery and the dehumanizing understanding that white people are superior and Natives are ‘savages’. And because both Republicans and Democrats accept this world view, the difference between the two (Trump and Biden) is merely the difference between explicit white supremacy vs. implicit white supremacy. They both agree that Native Nations are not truly sovereign over their lands (which is why the federal government holds them in ‘trust’ in the first place), Vice-President Biden just promises to be a little nicer about how he wields his dehumanizing views.

The 2020 presidential election is crucial, and many Americans are focused on one thing: Electability. Jill Biden summed this position up best when she said, “Your candidate might be better on, I don’t know, health care, than Joe is, but you’ve got to look at who’s going to win this election, and maybe you have to swallow a little bit and say, 'Okay, I personally like so and so better,' but your bottom line has to be that we have to beat Trump.” (Washington Post)

At the time, the Democratic party had an incredibly diverse pool of presidential candidates. There were more women, more people of color and more members of the LGBTQ+ community in their pool of candidates than in any other presidential election prior.  Since then all of that diversity has been removed, and today Joe Biden stands as the sole remaining Democratic candidate.

Joe Biden was not the most articulate of that diverse pool of Democratic candidates, nor was he the most passionate, and Jill Biden was absolutely right, her husband was not the best candidate on the issues. Even his vision is suspect. Joe Biden's primary vision is to erase the policies and memory of President Trump. If that sounds familiar it's because his vision is not that different from the vision of the man who currently sits in the Oval Office. Donald Trump, who also is not very articulate and frequently struggles to even display a desire to understand the issues, let alone handle them, got himself elected by promising to erase the policies and memory of his predecessor, Barack Obama, as he strove to Make America Great Again.

Neither of these men have vision, they both are running on nostalgia.

The only time mediocrity translates into electability is when the goal is to maintain the status quo. And while the Democratic and Republican parties may dislike each other and vehemently disagree on issues like health insurance, they both have a vested interest in maintaining the status quo regarding our nation’s racist, sexist and white supremacist foundations.

Which is why, in important elections like this, both parties cue their most mediocre white men from the one percent whose electability is based almost entirely on their race, gender and financial class, coupled with their uncanny ability to peddle nostalgia.

The year is 2020, and our country still has not abolished slavery (the thirteenth amendment keeps slavery legal in prison). We still have not decided that we want to treat women as equal (and human) under the Constitution. We still affirm that land titles in the U.S. are based on the dehumanizing Doctrine of Discovery. Our Declaration of Independence refers to Natives as ‘merciless Indian savages’, and our Constitution never mentions women, specifically excludes Natives, and counts black people as three-fifths.

Our country needs change, foundational level change. Systemic change. But that type of change does not come easily. Foundational change requires a leader with a comprehensive understanding of the history, an articulate and honest analysis of our current problems, and a compelling vision to move us, ALL of us, forward.

The problem is that our country has never collectively decided that we want to be a nation where We the People includes everyone. And to prove it we continue to nominate candidates who peddle nostalgia. However, in a nation built on racism, sexism and white supremacy, the past is only nostalgic for white, land-owning men.

Mark Charles is a dual citizen of the United States and the Navajo Nation. He is running as an independent candidate for the office of President of the United States with a vision it to build a nation where We the People truly means #AllThePeople. You can learn more about his campaign on his website: markcharles2020.com