The Winter Solstice Begins a Season of Storytelling and Ceremony 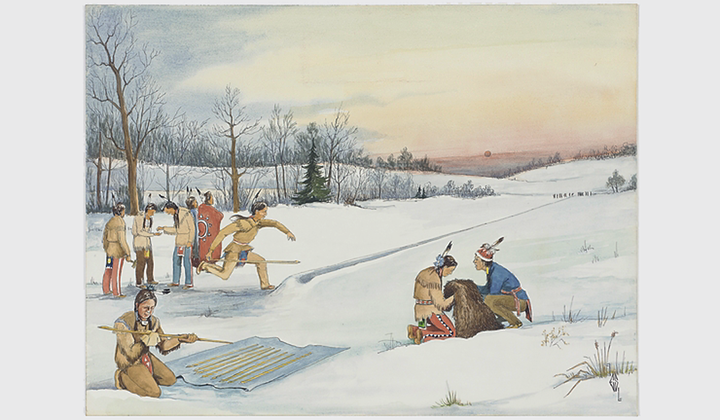 In the Northern Hemisphere, December 21 will be the year’s day of least sunlight, when the sun takes its lowest, shortest path across the sky. North of the Arctic Circle, it will be the midpoint of the period of darkness, when even twilight doesn’t reach the horizon. As we did before the solar eclipse in August, this December we asked our Native friends to share traditions they’ve heard about the winter solstice. Their answers highlight winter as a time for storytelling.

Editor’s Note: This article first appeared on the Smithsonian’s National Museum of the American Indian’s website in Dec. 2017. Used with permission. All rights reserved.

Ojibwe (Minnesota Chippewa Tribe): This description of winter in many Native communities was prepared by the Indian Land Tenure Foundation/Lessons of Our Land as background for teachers:

Like many events in American Indian culture there is a proper time and place for all activities. Traditional storytelling is reserved for the winter months for many tribes. This was a practical choice given the fact that during the other season’s, people were busy growing, gathering, and hunting food. It was in the winter, with the long dark evenings, the snow and wind blowing outside, that telling stories was a way to entertain and teach the children. Another reason is that many traditional stories contain animal characters. To be respectful, people waited until the winter when animals hibernate or become less active so they cannot hear themselves being talked about.

To have a storyteller tell you a story is like receiving a gift. To be respectful, a gift of tobacco is offered to the storyteller before the story begins. The storyteller will often take the tobacco outside and place it on the earth as an offering to the spirits of the story.

San Carlos Apache (Arizona): This reminds me when I was young. My grandfather would ask a really older man to come visit. We would eat dinner; they would visit, smoke. Then my grandpa would put a bundle at his feet. Soon he would start telling stories most of the night.

Ho-Chunk Nation of Wisconsin: We have to wait for the Winter Moon, and there has to be snow on Mother Earth for those stories.

Blackfoot (Calgary, Alberta): Blackfoots are the same with the snow and stories.

Acoma Pueblo (New Mexico): The winter solstice marks our New Year in Acoma. We mark the time with ceremonies not privy to the public.

It’s also the time of haamaaha, storytelling of the coyote, stories of heroes, stories of the animals, sharing of knowledge. My parents said that when you call haamaaha, people will arrive with piñon nuts gathered in the fall that are roasted and shared.

Passamaquoddy (New England): In traditional calendars in the Northeast, the solstice is always marked. For my folks it’s a sign that the frost giants will be returning to the North.

Syilx (Washington State & British Columbia): What I know is that it marks the point in time when our Winter Ceremonies can be held. My grandmother sometimes held her first ceremony of the winter at this powerful time. We have winter dance ceremonies; prayers for the new year to come, for the berries, roots, four-leggeds, and fish—the four Food Chiefs; prayers for our families and ourselves. There are songs, dancing, feasting, and a give-away. This is held during the evening and can go all night, depending on the number of sacred singers who come to share. The ceremonies are called winter dances. Or my grandfather also called them Chinook dances. In our territory to the south in Washington State around Nespelem, my grandfather told me of one dance ceremony lasting ten nights in a row!

Dennis W. Zotigh (Kiowa/San Juan Pueblo/Santee Dakota Indian) is a member of the Kiowa Gourd Clan and San Juan Pueblo Winter Clan and a descendant of Sitting Bear and No Retreat, both principal war chiefs of the Kiowas. Dennis works as a writer and cultural specialist at the Smithsonian National Museum of the American Indian in Washington, D.C.

Donate
Free Newsletter
About The Author
Author: Dennis W ZotighEmail: This email address is being protected from spambots. You need JavaScript enabled to view it.
Breaking News