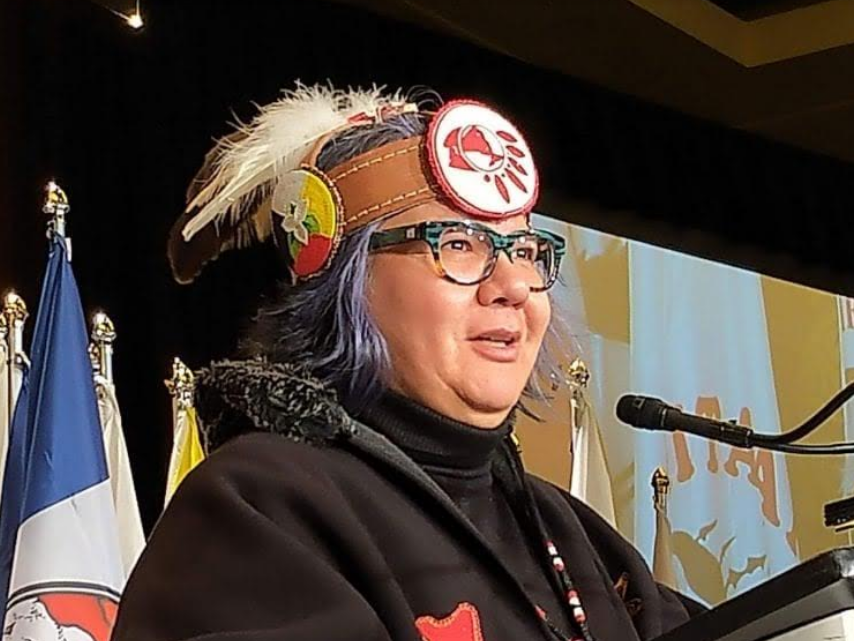 OTTAWA, Ontario —  Comprised of 634 chiefs, representing all First Nations across the country, Assembly of First Nations (AFN) National Chief RoseAnne Archibald has petitioned US Secretary of the Interior, Deb Haaland, “to vacate the previous administration’s wolf delisting rule and start the process anew.”

Two days before the January 6 insurrection at the US Capitol, former President Donald Trump’s administration stripped the gray wolf of Endangered Species Act (ESA) protections, permitting states to launch what the AFN and Union of British Columbia Indian Chiefs (UBCIC) both describe as “culls.”

“Secretary Haaland also has the authority to intervene in the Rocky Mountain region where state legislatures in Idaho and Montana have passed laws to cull wolf populations by 90% and 85% respectively, using inhumane, previously outlawed techniques,” states the UBCIC in its appeal.

Three wolves from Yellowstone National Park, a yearling female and two female pups, have recently been killed under Montana’s new laws. The wolves were members of the Junction Butte pack which visitors from around the world travel to view.

In the AFN’s letter to Haaland, National Chief  RoseAnne Archibald (Taykwa Tagamou Nation) congratulates the first Indigenous woman to serve as US Secretary of Interior on her “herstoric appointment.” Archibald is also a history-maker, being the first female National Chief of the AFN.

Archibald urges Haaland to “work closely with the Tribal Nations signatory to The Wolf: A Treaty of Cultural and Environmental Survival.” The UBCIC adds, “As the Wolf Treaty has been described as the ‘blueprint for wolf management,’ we hope Secretary Haaland will honour and implement the immense wisdom contained in the treaty.”

Initiated by the Global Indigenous Council (GIC), the UBCIC signed the Wolf Treaty in 2019. With the AFN joining the cross-border Indigenous coalition, a massive 700-plus Tribal Nations are now signatories or supporters of the treaty. Secretary Haaland is scheduled to receive the Wolf Treaty from a tribal delegation headed by the GIC in late October.

The Wolf Treaty was authored by acclaimed filmmaker Rain (Somebody’s Daughter/Say Her Name), who serves as GIC’s executive director. In collaboration with award-winning actress Crystle Lightning (Trickster/Yellowstone), Rain directed a short film, Family, which Lightning describes as “a vignette of the ancient connection Indigenous people share with the wolf.”

Appealing to Haaland to return protections to the wolf, in its first four days of release over 170,000 people viewed Family on multiple platforms. Inspired by the film, in a matter of days the Center for Biological Diversity submitted over 23,000 public requests to Haaland calling on her to relist the wolf under the ESA.

Both the AFN and UBCIC emphasize Family’s message. “The gray wolf is an extremely important species with tremendous cultural significance to many of our Nations with ties to Tribes across the Medicine Line (Canada-US border), writes National Chief Archibald. “The Trump delisting rule also has immense cross-border implications for First Nations north of the border who have treaty relationships with the US that pre-date establishment of the border,” expounds the UBCIC.

The Canadian tribal organizations focus on how “the Trump Administration violated the law,” a fact underscored by the AFN:

“In a public meeting with stakeholders in July 2021, Principal Deputy Director of the FWS Martha Williams conceded that Tribes had not been consulted by the Trump Administration in the delisting rule making process and, in effect, government had violated the law.”

National Chief Archibald continues, “The listing and delisting processes for endangered and/or threatened species must include “meaningful” and “robust” Nation-to-Nation consultation and collaboration, to fulfil commitments made under Executive Order 13175 and The Presidential Memorandum of January 26, 2021 (Tribal Consultation and Strengthening Nation-to-Nation Relationships). Further, these consultations must meet the standard of Free Prior and Informed Consent, as set out in the United Nations Declaration on the Rights of Indigenous Peoples (UNDRIP).”

The UBCIC references the Biden Administration’s commitments on tribal consultation and climate change but suggests that its inaction on the wolf is contrary to both.

The AFN and UBCIC petitions were furnished to Secretary Haaland, US President Joe Biden, and Canadian Prime Minister Justin Trudeau.

“The time is now for Secretary Haaland to rectify this and to stop not only the killing of the gray wolf, but the continued assault upon Indigenous cultures,” asserts the UBCIC.