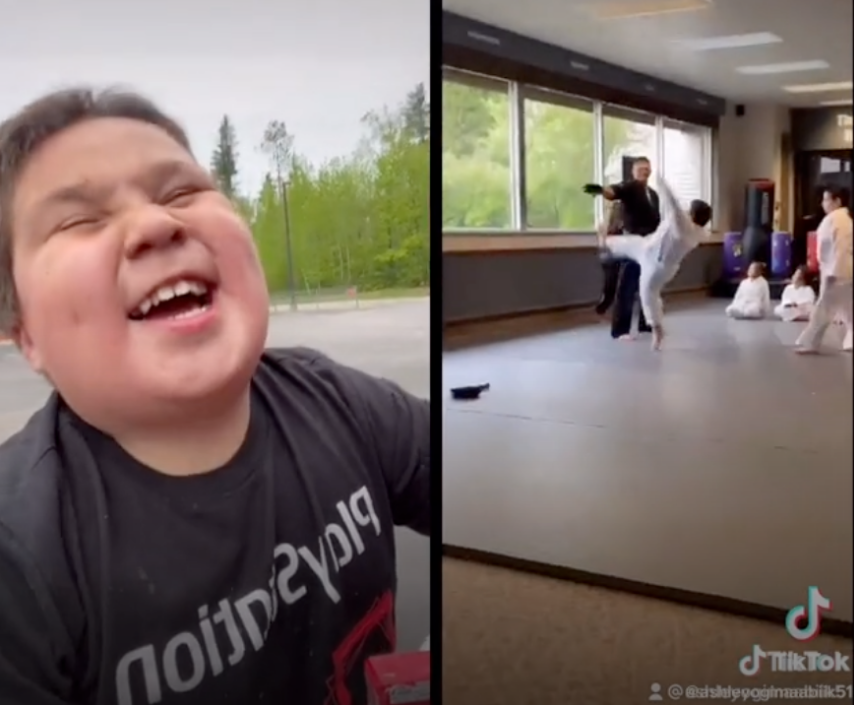 The video captured by his stepmother, Ashley Ogimaabiik Armstrong, has garnered millions of views and nearly 8.2 million likes and 100,000 comments in a week on the social media service. Ashley turned on the video recorder at Liam's practice so everyone in the family could see his kicks after practice.  His first two kicks went well, but then his instructor raised the height of the board he was kicking, and Liam went for it.

“As I was recording, our son went for a really high kick so he wouldn’t miss out on the challenge,” Ashley told to Native News Online. “He went so high, he went backwards. He got up right away and was laughing."

“After class I showed Liam the video, and he couldn’t stop laughing at himself,” Armstrong said.

Liam asked Ashley if she posted it to the internet. She had not because she was unsure if Liam would have approved, so she waited until he gave his unsolicited permission.

“We have a big, beautiful blended family, and we all enjoy laughing together,” Ashley said.

Liam told Ashley he wanted her to post the video to the internet.

“So, I edited the video in TikTok and wanted to see his blind reaction and he loved it,” she said.

Once it was posted to TikTok, the video caught the attention of Sports Illustrated, ESPN, and House of Highlights — and it quickly went viral. Thousands of users are publishing videos of themselves watching Liam’s video.  Many of them are getting a kick out of the high-flying action.

“This look(s) like the cartoons when they slip on a banana peel,” said TikTok user @cris7iano_.

Liam just completed third grade at the Lac du Flambeau Public School, where both of his parents attended, and loves to hunt and fish—from the boat, through the ice, and spearfishing.

“His Rocky-themed video has gone viral on TikTok with millions of social media views and was even featured on Sports Center,” said the Lac du Flambeau Public School of Liam’s video on Facebook. “Congrats to Liam and his family.”

Ashley shared that there have been a few offers to buy the rights to Liam’s video, but she’s been denying each offer so far.