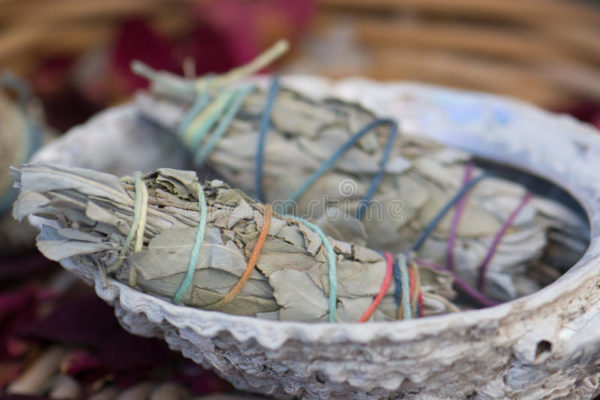 The Blackfeet superhero Poia, or Scarface, began his epic journey as a young man who was seeking the help of Naató’si, the Sun. From Blackfeet country on the Northern Great Plains Poia traveled east to the home of Naató’si.

After traveling a long time Poia finally made it to the land of the Sun. Poia met first Iipisówaahs, the Morning Star, the son of Naató’si and Ko’komíki’somm, the Moon. Luckily for Poia, Iipisówaahs agreed to take him to his parents’ home.

The Moon welcomed Morning Star’s new friend Scarface into her home. She was well known for her benevolent nature. However, the Sun had the opposite reputation. The Moon warned Poia that the Sun might not welcome him. As the Sun came near their home after his long day’s work he realized that a human was present. “What is that smell?” he growled. The Moon quickly instructed Poia that it was necessary to smudge himself before meeting the Sun. Then she showed him how to do it.

It is from this story of Poia and his encounter with the supernatural deities of the Sky World that the Blackfeet first learned about smudging, which they and other Native American groups use as a method of purification. They believe that it is necessary for humans to purify themselves before interacting with the supernatural.

Smudging is the process of burning dried plants or other natural elements and then using the smoke to cleanse themselves, objects, or even places. Usually the dried plants are burned over a hot coal placed in a large shell or on the ground. The person places both hands over the smoke, takes the smoke within her hands, and beginning with her head and continuing downward, “washes” her entire body with the smoke. Elders say that smudging both decreases human odor and purifies and prepares a person to communicate with the supernatural. Some say it helps humans transcend into the supernatural realm.

The word “smudge” is, of course, an English word; the Blackfeet and other Native American groups had their own unique words for this process. One Blackfeet word for smudging is ssiiyaki, which translates as “to cleanse or purify” for a religious activity. It shares the same root as ssiini, “to erase or wipe off,” and ssiistsi, “to take a bath or wash.”

The Blackfeet believe that there exist in the universe three separate but interconnected worlds, which they call the Sky World, the Water World, and the Below World. The Blackfeet believe that within these three worlds live both natural and supernatural beings and deities. These beliefs were set forth millennia ago in stories that continue to be passed down today. Through these stories, the Blackfeet learned to purify themselves, objects, and places—by smudging before interaction with these other worlds, as part of their daily purification and prayer, with the turning of the seasons, and during specific rituals and ceremonies. The Blackfeet used a wide variety of dried plants and natural elements found across their vast landscape as materials for purification.

Unfortunately, when the Blackfeet became relegated to a small portion of their original territory in the late 19th century, they lost access to many of the plants and natural resources they used in their religious practices.

Learning from the Elders

Elders say that in the past the Blackfeet saw their religious practice as a process: first purification, and then prayer. When my mother was growing up, her grandmother, Hollering In the Air, or Old Lady Aimsback, began each day by telling her grandchildren, “Come here, I am going to smoke you folks.” After she smudged her grandchildren with pisstááhkaan (tobacco) smoke she prayed to her supernatural allies. Today, however, many people think of smudging as a ritual in itself rather than a preparation for interacting with the supernatural.

While visiting with elders as I began to document the various uses of plants, especially those not used any more, elders in my family and in the community were concerned that many people today believe that the Blackfeet only used three plants for purification: sipátsimo, or sweet grass (Hierochloe odorata); ka’ksimó, or sage (Artemisia sp.); and kátoyiss, or sweet pine (Abies lasciocarpa). They insisted that the Blackfeet used many other plants—and other natural materials as well—for purification.

I looked in museums and archives to learn what elders of the past shared with visitors to the Blackfeet reservation 100 years ago. With the help of both contemporary elders and elders of the past, I learned that the Blackfeet used over two dozen different plants and natural elements for purification, not just the few used today. The elders were correct.

The Blackfeet used every part of various plants, drying the flowers, seeds, berries, leaves, stems, sap, and roots. They used fungi, minerals, and animal fur. The Blackfeet also used cold water and hot steam for purification. All of these bounties of nature can be found across the original territory of the Blackfeet.

The Blackfeet’s intricate system of relationships with supernatural beings across three worlds required a complex variety of purification practices. The Blackfeet used the myriad plants and natural elements at different times of the year, for different purposes, because each plant and natural material had a unique meaning and reflected a special relationship with the supernatural.

The concept of achieving purity before interacting with the supernatural is not unique to the Blackfeet. Many religions around the world believe that humans need to be pure or blessed before interacting with the sacred. Catholics, for example, bless themselves with holy water as they walk into church. And Poia learned to purify himself before meeting in Naató’si and Ko’komíki’somm’s home. Though much has changed today, we now know: there were a wide diversity of plants and other natural elements used for purification. The elders remind us that plants are necessary for purification, purification is necessary for prayer, and the natural and the supernatural were—and continue to be—inextricably linked.

Rosalyn LaPier (Blackfeet/Métis), Ph.D., is an award winning Indigenous writer, ethnobotanist and environmental activist. She is an associate professor of Environmental Studies at the University of Montana and a Research Associate at the National Museum of Natural History, Smithsonian Institution.

Editor's Note: This article was originally published in the Montana Naturalist in 2016