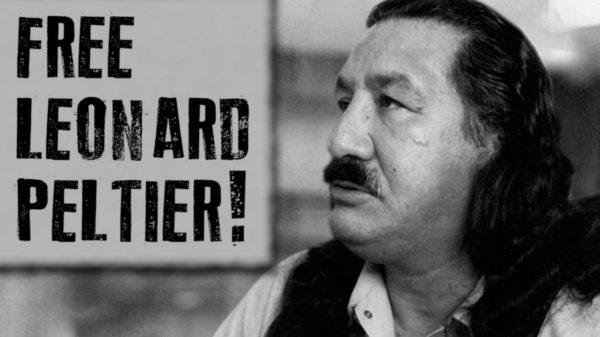 Often during powwows and other Indigenous gatherings, it is common to hear elders pray for those who are incarcerated. Elders seem to have a higher level of wisdom that makes us think about people who we may not normally think about—or even pray for—on a regular basis.

During these difficult days of the COVID-19 (novel coronavirus) pandemic, last week I began to think about Leonard Peltier being in isolation at the U.S. Penitentiary in Coleman, Florida.

He is there for his 1977 conviction in connection with a shootout with U.S. government forces, where two FBI agents and one young American Indian lost their lives on June 25, 1975 at a private residence at Oglala on the Pine Ridge Indian Reservation in South Dakota.

Peltier, a tribal citizen of the Turtle Mountain Band of Chippewa, has been behind bars over 44 years. Now 75-years-old, he is said to be wearing a mask during the pandemic. He is in the vulnerable age group and in poor health. He has chronic heart problems and diabetes.

To many American Indians, Peltier is a symbol of an oppressive federal system that confines Native people to a dismal place in American society. He is a political prisoner that we may only think about if we happen to see a bumper sticker on the back of a vehicle that simply reads “FREE Leonard Peltier.”

The pandemic made me think about Peltier this past week, but my favoring his release did not begin with the COVID-19 crisis.

Notable legal experts, including former U.S. Attorney General Ramsey Clark, say Peltier was not given a fair trial by the U.S. government.

“I think I can explain beyond serious doubt, that Leonard Peltier has committed no crime whatsoever. But if he had been guilty of firing a gun that killed an FBI Agent, it was in defense of not just his people but the integrity of humanity from domination and exploitation,” stated former U.S. Attorney General Ramsey Clark. “You have to remember no witness really said they saw Leonard take aim at anybody. No witness said they heard him shoot at the time he could have killed an agent. There was no evidence that he did it, except fabricated, circumstantial evidence, overwhelmingly misused, concealed and perverted.”

Even federal Judge Gerald Heaney, who presided over an appeal hearing, has said the FBI utilized improper tactics to convict Peltier. He suggests the FBI was equally responsible for the shoot-out.

Three years ago, former Iowa United States Attorney James Reynolds wrote a  letter to President Obama to support clemency for Peltier. In 1977, Reynolds led the federal government’s prosecution in Peltier’s trial. Reynolds said then that President Obama should grant Peltier’s Clemency Petition “as being in the best interests of justice considering the totality of all matters involved.”

Through the years, the FBI has adamantly opposed the release of Peltier. While the deaths of their two agents at Oglala were tragic by all human standards, the deaths of hundreds of innocent American Indians who died during the 1970s, known as the “Reign of Terror” on the Pine Ridge Indian Reservation, are equally tragic.

While the vast majority of Americans agree the FBI serves a vital service to this nation, it should be acknowledged that the agency is operated by human beings who from time to time make mistakes. Quite clearly, there is enough evidence that the FBI made mistakes in its determination to find Peltier guilty.

Many American Indians and others around the world view Peltier as a political prisoner. Through the years, Peltier’s supporters have included the Dalai Lama, Mother Teresa and Bishop Desmond Tutu, among other prominent names. For many years, the National Congress of American Indians and Amnesty International have called for Peltier's release from prison.

Peltier’s continued imprisonment is a continued miscarriage of justice by the federal government.

On Friday, The Marshall Project, a nonpartisan, nonprofit news organization that seeks to create and sustain a sense of national urgency about the U.S. criminal justice system, released staggering numbers that report 9,437 prisoners across the country have tested positive for the deadly coronavirus and there have been 131 COVID-19 deaths among prisoners.

Given all of the circumstances surrounding Peltier’s conviction, his prolonged imprisonment, and the potential risk he faces from the virus, he should be set free immediately.