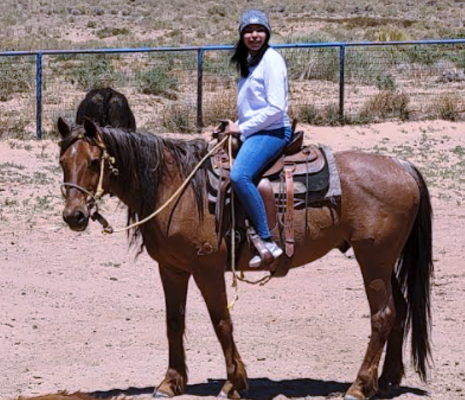 A Holbrook Indian School student was killed and six others were injured on Sunday morning when a semi-truck rear-ended a school bus that was taking them to Window Rock, Arizona, on a field trip.

The accident occurred at approximately 9:28 a.m., while the bus was headed eastbound on Interstate 40 near Sanders, Arizona, according to a report obtained by Native News Online from the Arizona Department of Public Safety.

The Holbrook shuttle van was carrying 23 people, including multiple minors. Seventeen-year-old Kiarra Gordon (Diné ) of Wide Ruins, Ariz., was pronounced dead at the scene, according to the report.  She was a student at the Seventh Day Adventist School Indian School in Holbrook, Arizona.

“This is a very sad day for the Holbrook Indian School community; one of our students died, and six others were injured in a school bus accident this morning,” Ulysses Campos, vice-principal for Student Life at Holbrook Indian School, wrote in a  statement on the school’s website.  Our concerns now are for our parents and families as we uphold and grieve with them. We ask that you would be patient and respectful as we work through this as a school community, and we solicit your prayers on behalf of everyone impacted by this tragedy.”

The victim’s aunt, Falonna Ashley, posted a message and photo on Facebook grieving her niece.

“It is with deep sadness we announce the unexpected passing of our beloved Kiarra Gordon,” she wrote. “She was a beautiful, sweet, smart & talented young woman who was always a joy to be around. We lost her through a semi/bus accident today. This hurts so much.”

Ashley wrote that the family is accepting donations through Zelle.

“We are accepting donations through Zelle:
Bank of America
Falonna Ashley
480-329-8551
Donations can also be dropped off at Albert Clark's residence in Wide Ruins.