A public comment session before Glastonbury Public Schools board of education meeting grew heated on Tuesday night. At issue was the desire by school alumni who wish to bring back the school's tomahawks name and logo that was dumped in August 2020 by the school board. 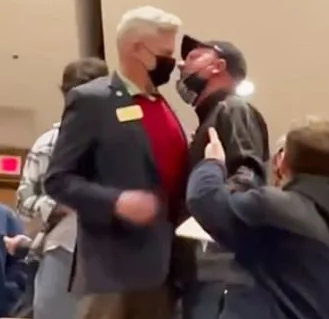 As of Wednesday, city police department in Glastonbury, Conn. was still investigating the violent incident.

The school board voted in August 2020 to terminate the tomahawks logo. The vote came within three of months after George Floyd was murdered by then Minneapolis police officer Derek Chauvin.

The school board chairman said in August 2020 that the school board took the George Floyd killing and the Black Lives Matter movement into consideration when debating to dump the racist logo. Additionally, the National Congress of American Indian contacted the school district to encourage it to get rid of the tomahawks logo.

“It was kind of a combination of those things, part of a broader cultural shift,” board Chairman Doug Foyle told the Hartford Courant at the time.

The change has been difficult for Glastonbury community members who circulated a petition to bring back the tomahawks logo.

Because of the violent incident, the school board adjourned its meeting without a vote on the issue.

“The Board of Education welcomes public comment and appreciates that there will always be passionate testimony when controversial issues are considered,” Glastonbury schools superintendent Alan Bookman said in a statement. “But it is critical that we listen to each other with respect and follow meeting rules so that everyone can be heard.”

Tuesday’s slugging incident did not result in any serious physical injuries. As of Wednesday evening, there were no arrests made.