WASHINGTON — He came into his post as secretary of the U.S. Department of the Interior riding a borrowed horse named Tonto through the streets of Washington, D.C. 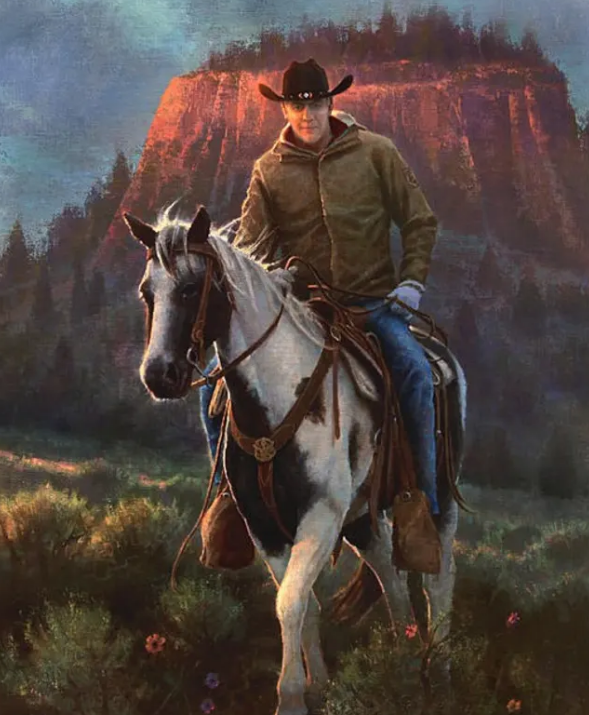 He left his post in December 2018 while under a dozen investigations on his conduct while serving as Interior secretary, including a question about a land deal involving a foundation he led.

Painted by Montana artist Brent Cotton, the portrait shows Zinke riding a horse with Bears Ears National Monument in the background. Zinke visited the national monument in 2017, the same year he worked vigorously to reduce the size of the Bear Ears to the dismay of five American Indian tribes who maintain the butte is sacred ceremonial land to their tribal citizens.

Zinke pushed the national monument reduction so that the land could be used for oil, gas and mining exploration. Upon Zinke’s recommendation, President Donald Trump reduced the 1.35-acre Bears Ears boundary by 85 percent and thereby lifted the restrictions on previously protected lands.

The portrait caught the attention of tribal officials and Rep. Raúl M. Grijalva (D-Ariz.), the chair of the House Natural Resources Committee, whose committee oversees many of the Interior Department’s activities.

He was not happy with the portrait depiction.

“Former Secretary Ryan Zinke left office under legal investigation, and his new portrait is entirely consistent with his smug, unethical, condescending tenure at the Interior Department. Setting his formal portrait at Bears Ears National Monument, which he happily dismantled despite the wishes of Native Americans around the country, is nothing more than an intentional final insult to tribes he disrespected from the moment he took office. This portrait is a petty monument to a petty man, and we can only look forward to a court ruling that reverses the damage he did to the landscape he has now abused twice.”

Shaun Chapoose, a member of the Ute Indian Tribe Business Committee and representative of the Bears Ears Inter-Tribal Coalition, wasn’t impressed with the Zinke portrait either.

“Zinke’s official portrait is the last gasp of a fading swamp creature,” Chapoose told HuffPost. “He testified to Congress that tribal ‘sovereignty means something’ while he ignored the clear statements of five sovereign tribal governments that the Bears Ears landscape needs and deserves protection.”

Even with his official portrait up in the U.S. Dept. of the Interior, Zinke still faces possible charges arising from the Interior's Office of Inspector General probe. The Inspector General referred the matter to the Justice Department for potential prosecution of conflict of interest laws.