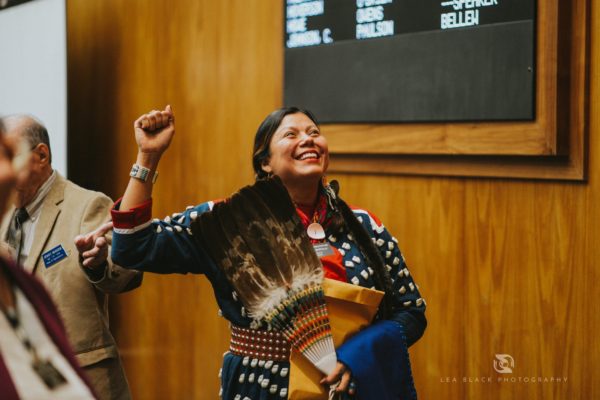 Wearing her regalia was quite appropriate in that Buffalo becomes the first American Indian Democratic woman in the state legislature in North Dakota.

Equipped with three master's degrees: one in management, another in business administration and one in public health, Buffalo knocked on over 6,500 doors to gain votes. Her goal was to resonate with District 27 voters at their doors. She talked about affordable health care issues, which impacts all residents regardless of race or ethnicity.

As fate would have it, she beat the incumbent, former state Rep. Randy Boehning, who sponsored voter ID legislation that sought to suppress the Native vote in North Dakota by requiring each voter provide an ID with a physical address.

Shaunna Thomas, co-founder and executive director of UltraViolet PAC, released the following statement after Buffalo's victory in the midterm election:

“We need more women like Buffalo in our state governments.

“Throughout her career, Buffalo has worked to fight a problem that most lawmakers still choose not to give the proper attention to--trafficking of, and violence against, Indigenous women and girls. As a public health advocate and mom, she has also named affordable healthcare, public safety for all communities, and education equity among her top priorities for all the citizens of North Dakota."