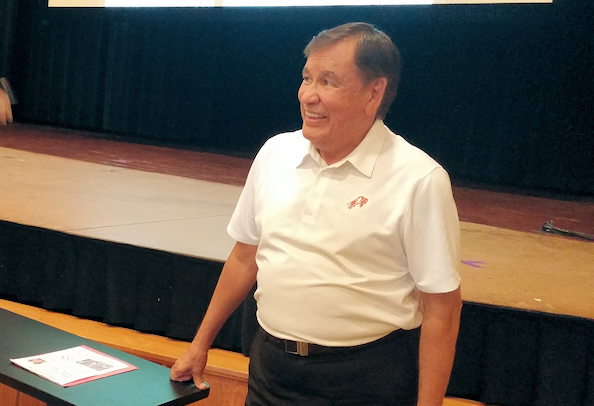 ALEXANDRIA, Va. and PINE RIDGE, S.D. — In an effort to ensure an accurate count of American Indians and Alaska Natives, the 2020 Census Bureau has teamed up with Olympic Gold Medalist Billy Mills (Oglala Sioux). The joint marketing effort, called “Beat the Drum. Be Counted!” campaign was launched today through Running Strong for American Indian Youth, a nonprofit founded by Mills.

Historically, American Indians and Alaska Native have been dramatically underserved in part due to undercounting.

“The Census makes a real impact in people’s lives,“ said Running Strong and Beat the Drum spokesperson Billy Mills. “You can feel it in understaffed health clinics, and see it in everything from roads to veterans’ support to housing assistance. As an American who went to public schools and served our country, I know first hand how much we rely on these programs.

“Everyone deserves to be counted – and that starts in our Native American communities,” said Mills, who in 1964 won the gold medal in the 10,000 meters, and he remains the only American to ever win the event.

"Every Passion has Its Destiny," Billy Mills (Oglala Lakota), left, winning the gold medal
in the 10,000-meter race in the 1964 Tokyo Olympics. Photo courtesy of Billy Mills

Native Americans and Alaskan Natives living on reservations or in Native communities were undercounted by approximately 4.9 percent in the 2010 Census. That is more than double the undercount rate of the next closest population group. This inaccuracy has financial ramifications resulting in a loss of millions of annual federal dollars to Indian Country that would otherwise be used to improve public utilities such as public schooling and transportation infrastructure. It also has political consequences in redistricting voting geographies and allocating Congressional seats.

Beat the Drum. Be Counted! will address this inequality with a series of PSAs, social media campaigns, phone banking, and local organization partnerships designed to inform and empower local marginalized residents about their census rights.

“The 2020 Census has been specifically designed to improve response rates from all over Indian Country, but with Running Strong and Billy on board we hope for unprecedented turnout,” said Anne Eagle Bull, 2020 Census Tribal Partner Specialist. “This is an exciting joint venture and we are excited to partner with Running Strong.”

More information, outreach materials and updates on Beat the Drum. Be Counted! events will be available at Running Strong for American Indian Youth’s website, www.IndianYouth.org.