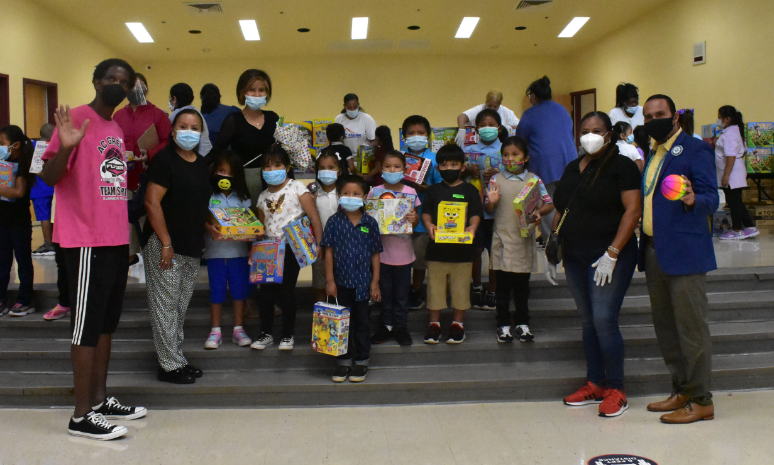 SAN CARLOS, Ariz. — Even though they were wearing facial masks due to the Covid-19 pandemic, the smiles of some 900 Native youth could be seen coming from their eyes on the San Carlos Apache Indian Reservation. Their delight came from picking up school supplies and toys made possible by legendary NBA all-star A.C. Green who showed up to help give away the items.

Green, who is part Choctaw and Cherokee from his mother’s side of the family, donated the items through his A.C. Green Youth Foundation, which works to provide underserved youth and the communities they live in with resources, materials and support.

“I was fortunate enough to help raise funds for the back-to-school supplies and toys,” Green told Native News Online on Wednesday afternoon. “I love what these schools are doing. They take a ‘whole person approach’ in education. This is important to me.”

Green is no stranger to Indian Country. For several years, he has attended the National Indian Gaming Association’s annual tradeshow and convention. Additionally, Green says he attended commencement ceremonies at Haskell Indian University in Lawrence, Kan. as a guest of NIGA Chairman Ernest Stevens, Jr.

“It has been an eye-opening experience for me to learn about the needs in Indian Country. They come in all sizes and shapes,” Green said.

Green played in the NBA for the Los Angeles Lakers, Phoenix Suns, Dallas Mavericks and Miami Heat. During his time with the Lakers, he won three championships in 1987, 1988 and 2000. Green holds the NBA record for most-consecutive games played with 1,192.

Tuesday’s event was also made possible through a collaboration with the Partnership with Native Americans, a Native-led nonprofit that partners with tribal programs to serve Native communities. Another collaborator was Arizona FACTS of Life, a nonprofit dedicated to guiding young people to success by providing developmental opportunities that may not otherwise be available to them. The organization serves youth in and around the Phoenix area and provides behavioral and preventive health services.

“It is so important right now with the pandemic running rampant to come in with something positive, something hopeful, especially in our Native American communities. This is something you can’t talk about it, you just have to be about, you just have to do it. So, I am just happy to be able to reach out to do as much as I can, along with our Arizona FACTS of Life, to make a difference wherever we can,” Green said on Tuesday.

Green says he will be on the Navajo Nation on Thursday in Pinon, Ariz. to give out more school supplies and toys.