Reservations Are Being Targeted With Pro-Trump Vandalism 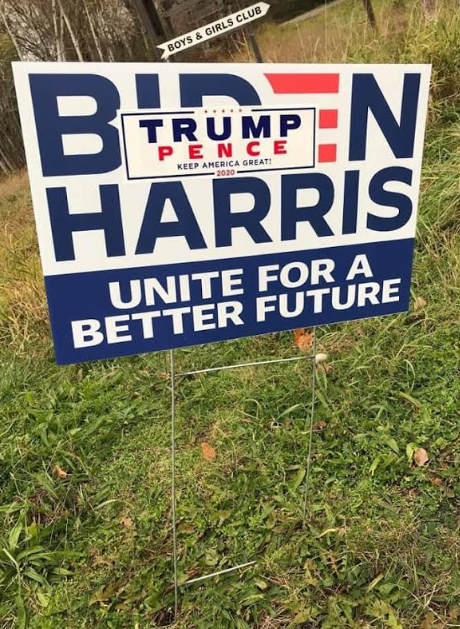 The vandalism was noticed yesterday morning by Andrea Eastman, as she traveled on her daily route to and from her father Milton Eastman’s residence, which is about five miles out of the City of Sisseton and has a population of 2,426 according to the city’s website.

“It’s a right-wing deal,” Sisseton-Wahpeton Sioux tribal member and elder Milton Eastman told Native News Online during a telephone call. “We reported it to the SWO Tribal Police and the City (of Sisseton) Police knowing nothing is going to get done, but we have to document these incidents, so we know that it happened.”

Both Sisseton and SWO Tribal Police were called and didn’t respond to the report and cited a lack of evidence, according to Milton Eastman. The tribal radio station, KXSW 89.9 FM, responded and reported the incident to the community.

This morning, however, additional activity was reported near Milton’s property. The nearest speed limit sign was also vandalized with the words “Trump 85” on a gravel road with a speed limit of 35 mph.

“To me, this vandalism represents Trump Country,” says Eastman. “Around here, in rural South Dakota near the reservations, people are encouraged by the statements made by President Trump on race and division.”

“I’m fearful that someday someone might put a shot through my window, because I’m a tribal member and our neighbors have never been kind to us” added Eastman. “The Proud Boys are suddenly everywhere.”

Milton Eastman cited President Trump’s most recent debate, when challenged to condemn white supremacy he responded by stating “Proud Boys, stand back and stand by.” This statement was criticized by many, including Republicans who have since publicly separated themselves from President Trump because of his comments.

South Dakota State Representative Tamara St. John, who is the elected representative of the district and a Sisseton-Wahpeton Sioux tribal member, did not respond to multiple requests for comment.

Incidents such as these are occurring across Indian Country.

In the far Northwoods of Wisconsin, a similar situation was reported to Native News Online on the Red Cliff Indian Reservation near Bayfield, Wis.

Earlier today, Red Cliff Band of Lake Superior Chippewa Indians tribal member Carolyn Gouge noticed her Biden | Harris Unite for a Better Future sign was defaced with a Trump | Pence bumper sticker. Her pro-Biden sign was placed next to her Pow Wow the Vote sign, which is a sign distributed by Wisconsin Native Vote throughout the State of Wisconsin encouraging everyone to participate in the November 3 election.

The only reason she noticed the damage to her sign is because recently she placed a Biden | Harris sign in the tribe's Veteran Memorial Park only to find it being taken only two days after being placed up, Carolyn Gouge told Native News Online in a phone call.

“I wonder what happened to the idea of ‘we’re all entitled to our own opinion’ as disagreements are bound to happen during the election season,” said Red Cliff tribal member Carolyn Gouge. “But once it turns physical, it becomes pure hatred.”

The Red Cliff Indian Reservation has a population of approximately 924, with most of those living on the reservation tribal members. The reservation is located at the top of the Bayfield Peninsula, on the shores of Lake Superior in northern Wisconsin.

The vandalism demonstrates a growing national trend with incidents of signs, both pro-Trump and pro-Biden, either reported as missing or defaced. However, this is the second incident investigated by Native News Online where an Indian reservation is targeted by seemingly pro-Trump propaganda.

Last week, Native News Online reported a welcome sign defaced with Trump 2020 and a symbol similar to a nazi sign near the Red Lake Indian Reservation in Northern Minnesota. You can read more about the incident here.

About The Author
Author: Darren ThompsonEmail: This email address is being protected from spambots. You need JavaScript enabled to view it.
Darren Thompson (Lac du Flambeau Ojibwe) is a staff reporter for Native News Online who is based in the Twin Cities of Minnesota. Thompson has reported on political unrest, tribal sovereignty, and Indigenous issues for the Aboriginal Peoples Television Network, Indian Country Today, Native News Online, Powwows.com and Unicorn Riot. He has contributed to the New York Times, the Washington Post, and Voice of America on various Indigenous issues in international conversation. He has a bachelor’s degree in Criminology & Law Studies from Marquette University in Milwaukee, Wisconsin.
Breaking News