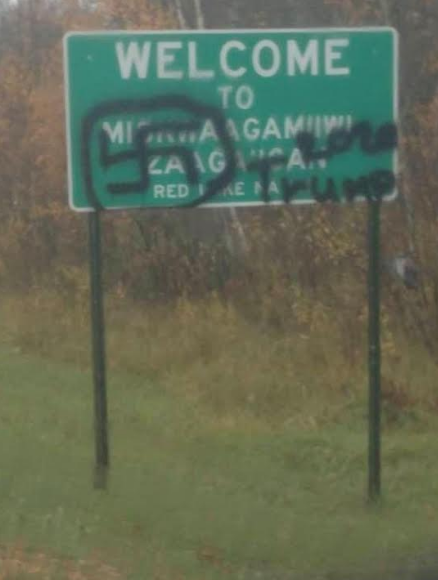 The welcome sign is one of four identical dual language signs at the Red Lake Indian Reservation’s border informing all of the Indigenous language before European contact and settlement, which is Anishinaabemowin — the language of the Ojibwe people. The signs were funded by the Red Lake Nation and were erected by the Minnesota Department of Transportation (MNDOT).

MNDOT did not respond to multiple requests for comment.

“Racism is in every one of our surrounding communities outside the reservation,” Red Lake Tribal Chairman Darrell Seki said. “(Racism) has been here since Columbus landed and activities like this isn’t new to us.”

Mountain is currently a full-time student at Bemidji State University and is the former Miss Red Lake, a position of prestige and representation of the Red Lake Nation.

“Even when visiting the lakes, we’re often targeted and chased away by locals with war whoops,” Mountain added. “We always have children with us. Who taunts children?”

In an email to Native News Online, Minnesota Lt. Gov. Peggy Flanagan, enrolled tribal citizen of the White Earth Band of Ojibwe, said: “We will not tolerate hateful symbols in Minnesota.”

“Native communities will not be intimidated by these cowardly tactics. We will make our voices heard and ensure our votes are counted,” Flanagan added.

Coming so close to Election Day on Nov. 3, the “Trump 2020” sprayed on the sign may be some spillover from a recent visit from President Donald Trump on Sept. 18 to nearby Bemidji, where he held a campaign rally. While there, Trump made comments to a mostly white crowd as having “good genes” for braving the cold winters in northern Minnesota and went on to attack refugees.

Bemidji is a town of 15,000, and surrounded by the Red Lake, Leech Lake and White Earth Indian reservations.

“As many are aware, there are almost exclusively Biden-Harris signs and support in our community,” Chairman Seki said. “And lately, there have been quite a few (Biden-Harris signs) missing and we don’t know who’s doing it or why.”

“You don’t see us doing that to Trump signs around here,” Seki added.

The Republican Party of Minnesota did not respond to emailed requests for comment.

According to Newsweek, at least nine people who attended the rally last month have tested positive for Covid-19.

CORRECTION: An earlier version of this story read the Minnesota Department of Transportation funded the welcome signs. The signs were purchased by the Red Lake Tribe to promote the preservation of its tribal language.