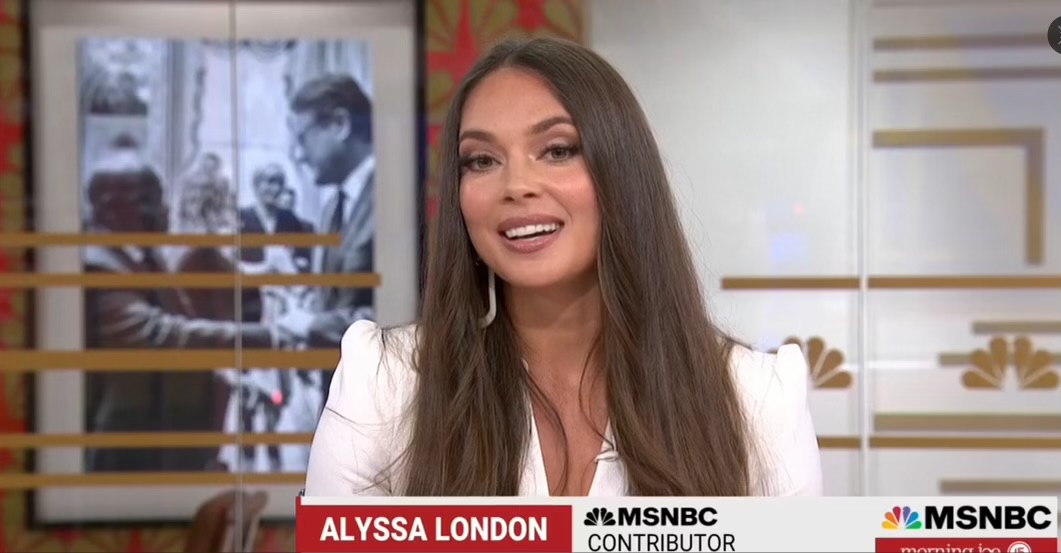 Aylssa London is a multi-talented Tlingit woman. A Stanford University graduate, a former Miss Alaska and an author, London will now give Indian Country some much-needed national media coverage as a contributor to NBC News.

Last Wednesday, London caught the attention of some in Indian Country when she appeared on MSNBC’s "Morning Joe" program.  It was her first major appearance after signing a deal that makes her a contributor to the network's news programming, where she'll weigh in on policies and issues that affect Native communities.

Native News Online caught up with London with a phone conversation from Los Angeles as she prepared for the National Center for American Indian Enterprise’s Reservation Economic Summit (RES) this coming week in Las Vegas where will serve as a hostess. This interview has been edited for clarity.

Tell us about your new role with NBC News.

I will appear across the NBC News and MSNBC network to weigh in on the issues and policies impacting Native communities in the United States.

How did they discover you?

I am represented by an agent team at the United Talent Agency (UTA) in their unscripted television department and recently the team expanded to include literary agents. My agent (UTA) pitched me, my background and my work to MSNBC, and I had the opportunity to interview for a contributor role. Ultimately, they decided they liked my background, as they commented I was "fascinating" and opened the door for me.

I think aspects of my background that helped them "discover me" and "choose me" for the opportunity are the years of sustained effort towards my platform that I began speaking to in 2008 with the Miss Seafair pageant. If you look at articles from even back then, I speak to many of the same topics that I do now. Being able to maintain consistency in your messaging I think allows people to know what they can turn to you as a brand, and know what you will likely represent when you speak. That's why their press team could articulate in a simple sentence on Twitter what I will talk about when they announced my role as a contributor. 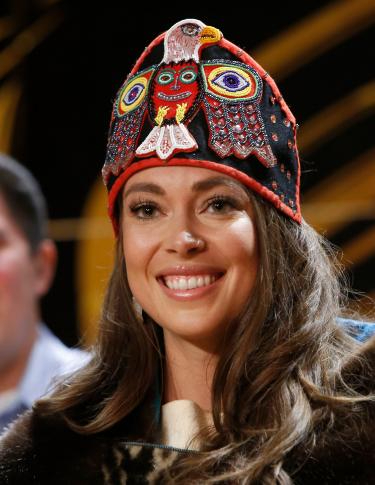 I want to point out that Doe Stahr of Seattle designed and created my Tlingit Regalia that is featured on Freckles in the book, Journey of the Freckled Indian: A Tlingit Culture Story, I wrote.

This is also the regalia I wore in my first pageant, for Miss Seafair when I represented the "Eastside Native American Education Program." I went on to wear a Tlingit Killer Whale Robe gown as a finalist at Miss USA almost 10 years after that. The Killerwhale gown won "Gown of the Year" at the Global Beauty Awards in 2017 and is in my tribe's archives at the Sealaska Heritage Institute. Preston Singletary, a friend and amazing Tlingit glass artist, designed the Killer whale — that is my clan crest — for the gown.

The killer whale gown came up a lot in conversations when I met with people at 30 Rock, so I think that helped me "become discovered" or at least confirmed their interest in my background and showed who I am and what I strive to represent when I am "on stage."

Ultimately, NBC is another ”big stage” like Miss USA was a moment on a “big stage.” Everything builds on the last thing, even if Miss USA was 5 years ago already, it still comes up and is a major building block in my career.

How often will you contribute to MSNBC?

Given the contract, I am able to contribute across MSNBC and NBC News platforms. My contributions will vary depending on the news cycle, and what they think I am topically a fit for to speak about. Also, as I build relationships with those who work in 'talent booking,' I will have more opportunities. One of the reasons I was in New York was to meet with key people related to my role at NBC News and MSNBC in the 30 Rock building. That way we could all put faces to names and know who we are communicating with online.

When I met people at 30 Rock whether on Zoom or in person, they kept saying, "Welcome to the family." That meant a lot to me. They also flew me across the country from Anchorage, Alaska, with a stop in Seattle, where I grew up, which I used to say hi to my parents, which meant a lot to me and centered me.

They had black town cars or SUVs pick me up to and from the airport and to and from the hotel to take me to 30 Rock for the meetings, and the appearance. I felt they did this not just for me, but to extend kindness and openness to our community.  They even had a young woman from Seattle and Petersburg, Alaska (who is of) Tlingit descent help me navigate the meetings and the huge building that is 30 Rockefeller Plaza. She was amazing and also a grounding presence because she recognized how “unheard of” my new contributorship is, and she kept commenting how much this would mean to her Grandpa (Tlingit) too. I can go on about the meetings and the conversations, but in short the team at MSNBC/ NBC is really making an investment in telling diverse stories across America including about Indian Country.

All Youth need great role models – especially Native youth. Your new role at MSNBC, certainly will be a great influence on Native youth.  Your book “Journey of the Freckled Indian” has a strong message. Tell us about that message.

When I competed in my first mainstream pageant in the Miss America system, throughout the preparations I listened to "I Was Here" by Beyonce ...a lot. I love the lyrics of that song. I still listen to this song periodically, it really motivates me and relates to what is being asked in this question.

To be honest, Beyonce inspires me a lot. She uses her work to show the beauty and vitality of Black culture. I try to do that (in my own ways) for Native culture and mixed race identities.

What are some of the lyrics that resonate with you?

I want everyone to know (like the lyrics say) "I give my all and do my best," and that I pursue my dreams with relentless persistence because I believe they are in my heart and mind for a reason, and it's my job to bring them to life and into the world.

As the song also says, "I did everything I wanted, and it was more than I thought it would be," I want to look back at my life and know I pursued my dreams to the greatest extent I was able to. I have found from the dreams I have achieved so far that it often happens that the achievement is in the realm of what I envisioned but it ends up expanding from even what I had thought would or could happen. 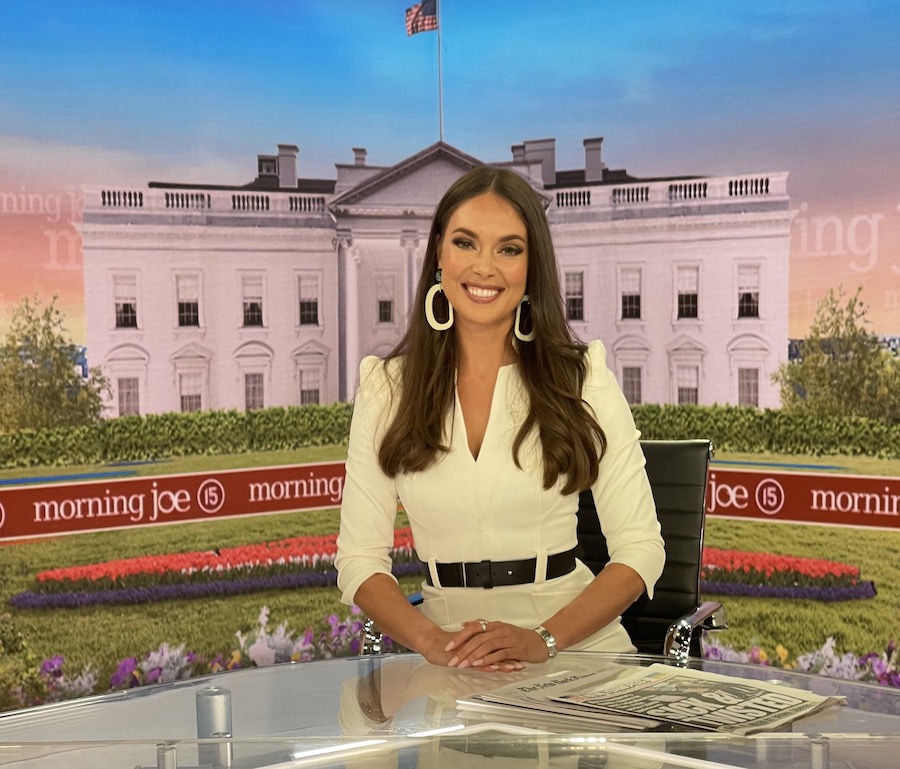 How does that thought get reflected in your other work?

With the message of the book "Journey of the Freckled Indian," and my Culture Story pursuits, I am trying to help people accept themselves and others. The "state of Native Nations" is that we are mixed race. It's the reality of our populations and that will only continue. The problem is, due to colonization and racism 'Indian Blood' is highly contentious and results in loss of identity and sometimes in disenrollment.

I loved my Tlingit grandfather and as I grew up and became more and more exposed to Tlingit culture, I was captivated by my heritage and community I am a part of. It became extremely important to me that it doesn't 'disappear' due to intermarriage or not growing up on your ancestral homelands, or due to having lighter or darker skin tone that a 'typical Tlingit.'

What do you hope your book and your work, including the new NBC relationship, can do to help Indigenous people?

I hope my work helps people feel validated to claim all aspects of their identity. I am very passionate about this message of claiming all aspects that make you, "you." That's the message of the book, "Journey of the Freckled Indian: A Tlingit Culture Story."

That's a message I hope to communicate across MSNBC, NBC News and Peacock content platforms, acceptance of yourself and others no matter your race, culture and heritage. I hope to impart the idea that there's more that connects us across humanity than divides us.

Preserving and perpetuating cultures throughout our melting pot of a country, and combating the 'otherness' syndrome that divides us is one of my missions through Culture Story and now my contributor role.

See how life provides the 'positions' to do your work throughout your career, when the pursuit is a mission and purpose, instead of a tactical function and role?

I hope youth consider (this) mindset when they think about their own lives.