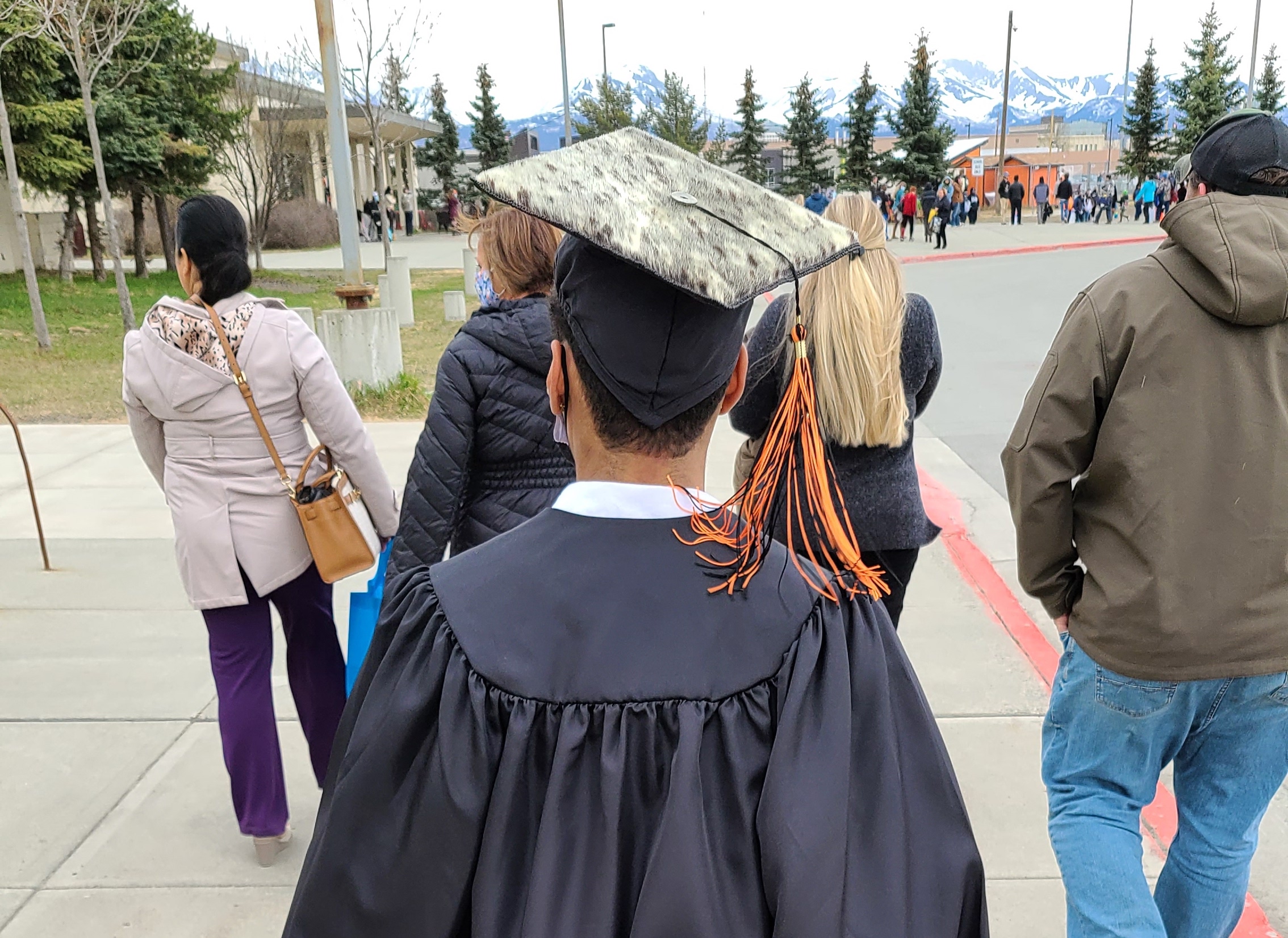 ANCHORAGE, Alaska — Last week, 17-year-old David Paoli should have accepted his diploma at his West Anchorage High School graduation ceremony with pride in both his milestone accomplishment, and in his culture—expressed through the sealskin-adorned mortarboard graduation cap his mother Indigenized the year before to wear at her own master’s graduation.

Instead, the cap—embellished with an abalone button, sealskin, and beading edgework to represent the family’s Inupiaq culture—was confiscated immediately prior to the ceremony by a staff member who incorrectly believed it went against policy. In reality, Paoli had followed school procedure by seeking prior approval to wear cultural regalia to his graduation through a district-wide notification process instituted in 2019, but the staff member was unaware of the changed policy.

“The first thing he said to me was ‘they took my sealskin cap, mom,’” said Paoli’s mother, Ayyu Qassataq. Her son’s father, who was on the other side of the procession of students before the ceremony, informed her that the sealskin cap had been confiscated. “Throughout the ceremony, I was fighting within myself because I wanted to be mentally present for my son's graduation. And I kept telling myself, ‘I’m not going to let them take this from us. They're not going to take this from us, too.'” 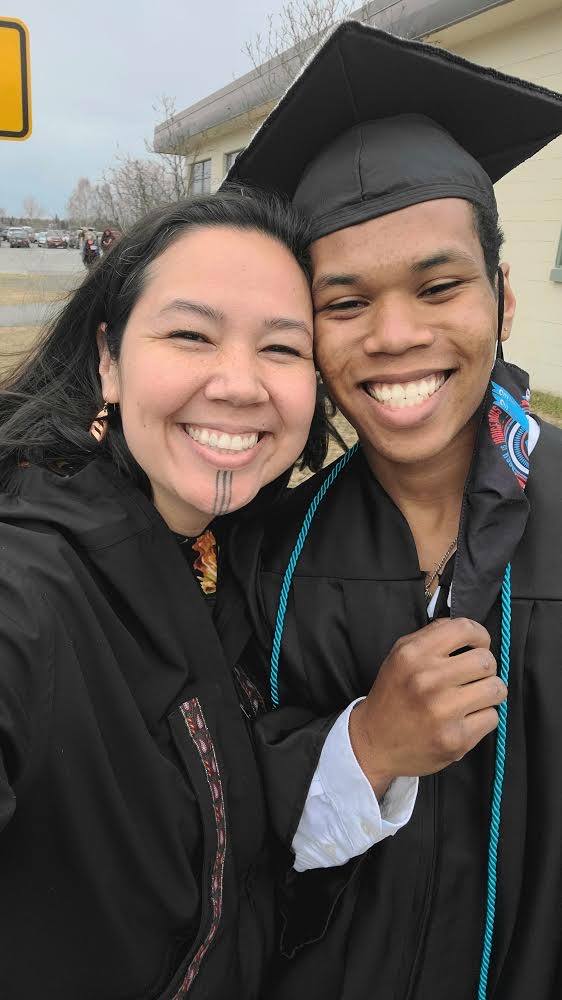 That night, Qassataq emailed school officials and the following morning, with her son’s permission, shared their story on Facebook, including the systemic oppression Alaska Natives have faced in the school system for generations. The family got their cap back—it had been held among other confiscated items from the ceremony. One week later, the post (subsequently printed as an op-ed in the Anchorage Daily News) had been liked and shared more than six thousand times.

By the following afternoon, Anchorage School District Superintendent Deena Bishop suspended the policy requiring students to seek permission from their school to wear cultural regalia. She said the policy was intended to allow student’s cultural expression while seeing that students avoided potentially inappropriate or offensive adornments.

“It was human error in a very large school district,” Bishop told Native News Online. She said the school’s assistant principal who was responsible for preparing staff for graduation was out on emergency leave, so the staff member that took his place—the one who took Paoli’s cap and replaced it with a plain motorboard—wasn’t properly trained about the district’s new allowance of cultural regalia.

“We look at it as really an alignment of the planets to make something happen to call for change and enlighten people on the bigger issue,” Bishop said. “It's not just about a motorboard, you know, it really is about ASDs connection to our student groups, our parent groups, the first peoples of Alaska.”

Anchorage School District is the largest in the state with close to 8,000 Native students, who represent 25 percent of the student population. In addition to Native students, Anchorage public schools are among some of the most diverse schools in the country, according to 2010 census data analyzed by a local professor.

Of 20 graduation ceremonies throughout the district, Paoli’s school in West Anchorage was one of the first. Before the regalia policy was suspended, Paoli’s classmate was also impacted when she was denied permission by the school to wear her Greenlandic shawl over her gown. She chose to forgo the school ceremony in favor of a culturally-grounded backyard graduation ceremony instead, according to a local report.

Superintendent Bishop told Native News Online that this, too, was an error in the process. She’s not sure if specific administrators responsible for confiscating Paoli’s cap or denying his classmate her right to wear traditional regalia faced consequences, but Qassataq said despite the public outcry, she personally doesn’t think those staff members should be fired.

“What happened to my son is a symptom of this much bigger systemic problem,” Qassataq said. “The person who took my son's cap graduated from East High School (in Anchorage) with me, raised in a district that both then and now has highly problematic teachings about Alaska Native people. The children who are learning in our schools grow up to become the adults who make mistakes like these.”

In various conversations with school administrators, Qassataq said many expressed shock about what happened to her son.

“For me, and for a lot of our Native people, it’s not shocking at all,” she said. “Of course, it was deeply disturbing and outrageous, but not shocking, because it's a symptom of deep ignorance about our people, and the systemic devaluing of us that has happened over time.”

The education system in Alaska was created with the expressed purpose of removing Native students from their cultures.

From the late 1800s to the 1970s, Alaska Natives were forced into a newly formed Western education system established within mission schools in some rural communities, and later taken from communities that lacked primary or secondary schools and sent to boarding schools run by the federal Bureau of Indian Affairs. At these schools, students were banned from speaking their Native languages, eating their Native foods, and participating in their traditional cultures through forced assimilation. Far from their families and communities, with little to no protection, young students were often subjected to abuse and violence. Studies show that the impact of the boarding school era has led to increased rates of alcoholism, abuse and suicide among Alaska Natives.

But this history isn’t taught in the Anchorage public school system. Qassataq said that her one main request of the school district as a result of this event is to do a better job in reeducating its educators, including through cultural training and expanded Indigenous curriculum beyond just one unit currently taught in the third grade. She says Bishop personally committed to her that this will happen under her leadership.

“As educators, it's critical that they know this history because they've inherited the legacy of it. As leadership with responsibility for overseeing the education of our children, they have to really come at it at two-fold: to do a much better job of teaching our students about the first peoples of this place, and reeducating the educators themselves about this history so that they can be protectors of our children.”

Superintendent Bishop said the school’s administration plans to meet for a cultural training and leadership summit in July, and has invited Qassataq as one of a handful of community members to speak to its educators.

Additionally, a new textbook on Indigenous culture written with input from Alaska Native elders and cultural bearers across the state will be incorporated into the third grade curriculum beginning next school year, she said.

In Anchorage School District’s Title VI Indian Education and Migrant Education—a department created by the U.S. government in school systems to address unique academic and cultural needs of Alaska Native and Native American students—Senior Director Doreen Brown (Yup’ik) said the new textbook is just one example of how the school district has been working towards a more inclusive and informed school culture.

“I work for a westernized system and I believe in education, but there is conflict,” Brown, whose own mother was impacted by the boarding school era, said. “I chose to work for a Western education system, but behind the scenes and in front of the scenes, I am trying to make it more culturally responsive, and the best it can be for all students.”

Qassataq recognized the textbook as an important step, but wants to see its teachings become incorporated throughout the K-12 curriculum in the district. “Can you imagine descending from countless generations raised in this place, representing a quarter of the student population, but really only seeing yourself reflected in the curriculum once in a short third grade ‘unit’?” she said. “Within our Indigenous knowledge systems are thousands of years of rich knowledge about this place, including how to be in good relationships with our lands and each other. The education our students receive will only grow stronger with inclusion of Indigenous and BIPOC peoples’ cultures, perspectives, and histories. Otherwise, we’re just brown bodies in a system that doesn’t reflect us at all.”

Raising the tide for all

At a school board meeting earlier this week, dozens testified in support of changes to the regalia policy, urging the school district to avoid what one Native American Rights Fund (NARF) lawyer called a “legally untenable position of determining which cultural regalia is worthy of respect and acknowledgement.”

“Many Native students wear their traditional regalia to recognize their academic success, their accomplishment of receiving their diploma, and their passage into adulthood,” Dougherty Lynch's letter reads. “This is no different than students wearing honor society, ROTC, or other cords or stoles recognizing academic achievement. To permit some students to recognize their academic accomplishments but deny Native students the same form of speech is viewpoint discrimination.”

Superintendent Bishop said the school district will convene on the policy in the coming weeks, and likely defer to the guidance of Brown and her Native American Advisory Board.

In other states, such as Washington and California, officials are passing legislation codifying the rights of Native Americans. In 2015, Washington—the second state behind Montana—mandated that tribal history be taught in all of its school districts, with the input from the state's 29 federally recognized tribes. In April, the California State Assembly’s Education Committee unanimously approved a bill that will protect Native American students’ rights to wear cultural items at graduation.

Though Paoli’s opportunity to wear his family’s cultural regalia at his high school graduation can never be given back, his mother hopes the outcome of this experience will drive significant change.

“Of course, this expands so far beyond our Native children,” Qassataq said. “In any movement, there is a desire to say, ‘and what about, what about and what about...’ and they are absolutely right. The system truly needs to transform in order to better reflect its students. But I really do feel that making this right for Indigenous children will help to raise the tide for all of us. The time for healing and transformation is upon us, and our society will be better and stronger for it.”