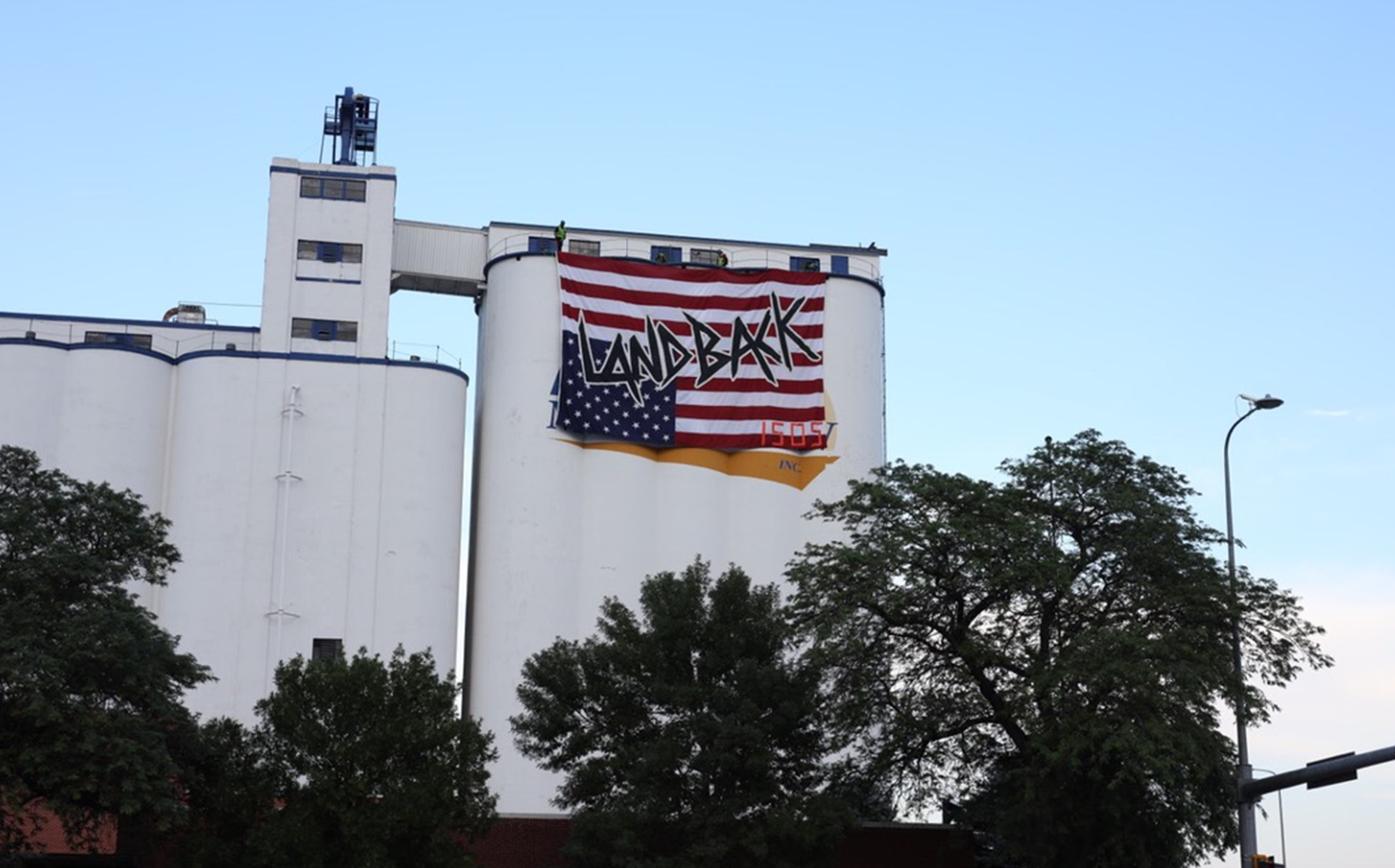 RAPID CITY, S.D.— NDN Collective organized a demonstration on Sunday, July 4—the day colonists declared Independence from Britain in 1776—that resulted in the arrests of four people. Four people climbed a 100 foot tall mill and grain silo in downtown Rapid City, adorned it with an upside-down American flag with the words “Land Back” and were arrested for trespassing.

The focus of the demonstration was police misconduct and brutality of all Native people. Overrepresentation of American Indians in the Pennington County Jail is common and is often criticized by many in Indian Country, giving the one of South Dakota’s biggest cities the nickname, “Racist City,” On Wednesday, KOTA TV reported that Rapid City has been named the most patriotic city in South Dakota.

“The self-declared ‘City of Presidents’ honors the legacy of past United States leadership on one hand, while brutalizing the original peoples and caretakers of the land on the other,” NDN Collective said in a statement.

A list of demands by organizers of the Fourth of You Lie protest and march are to create a Native American Commission elected by the local Native community and to form an oversight committee by people who have been most negatively affected by the Rapid City Police Department to coordinate culturally responsive community resources. They’re also asking the police department to publicly release disciplinary records for allegations of police brutality and for them to be externally reviewed.

NDN Collective LANDBACK Campaign Director Krystal Two Bull told KEVN that the demonstration was successful. “We hope that it (the demonstration) mobilizes and moves our people to action so that they are empowered and emboldened to take action and organize,” Two Bulls said. Two Bulls was arrested with three other Indigenous demonstrators. All four demonstrators are to appear in Pennington County District Court on July 19 or 20.

Last year on July 3, 2020, NDN Collective organized a protest near Mount Rushmore, where former President Donald Trump was scheduled to speak. The President’s request for a firework display at Mount Rushmore was the first at the national monument since 2009, in the middle of the COVID-19 pandemic. Law enforcement used pepper spray and arrested 21 people including NDN Collective Executive Director Nick Tilsen, who faces the most serious charges. The demonstration focused on theft of land, colonialism, and white supremacy.

Nick Tilsen was charged with second-degree robbery, simple assault against a law enforcement officer for allegedly stealing a shield from a female Air National Guardsman and assaulting her, all felonies. His misdemeanor charges were impeding a highway, unlawful assembly, disorderly conduct, and obstructing a public officer. Tilsen faces up to 17 years in prison.

A motion to dismiss charges was filed by Tilsen against the State of South Dakota on July 3, 2021 for violating Tilsen’s constitutional rights. Recently, the Pennington County Attorney’s Office made a statement that it intends to prosecute Tilsen, after initially saying charges against Tilsen would be dismissed in exchange for his participation in a diversion program.

While on bail, individuals have a protected right to free speech, a key element Tilsen states that Pennington County is trying to limit. “The case is about an attempt to limit my free speech,” said NDN Collective CEO Nick Tilsen to Native News Online. Tilsen’s public comments often targets the unfair treatment of Native Americans, including Land Defenders, by law enforcement and the criminal justice system.

After Pennington County Attorney Mark Vargo approached Tilsen with the possibility of diversion, Tilsen made a statement to the media about his charges being dropped along with the remaining 20 others who were arrested for their participation in the protest at Mount Rushmore. Native News Online reported on March 24, 2021 that Pennington County Attorney Mark Vargo said an agreement with Nick Tilsen hasn’t been finalized and he would only agree to the implementation of diversion if, “there is an acknowledgement of felony criminal behavior.”

“I just filed the motions to expose the true motivations behind the prosecution,” said Tilsen. Since charges have been filed against Tilsen, a grey cloud has hung over the work that NDN Collective strives to do in the local community.

In the last year, NDN Collective has been vital in the development of the Oceti Sakowin Academy, a school that incorporates the culture, language and values of the Lakota peoples, and the Mni Luzahan Camp, which houses unsheltered relatives in the Rapid City area. Nationally, NDN Collective invested $3.8 million to 44 organizations that serve Indigenous people and communities. “We’re creating jobs in this community,” Tilsen said. “They’re trying to coin us in the local community as radical protestors, but we’re working on education reform, sheltering those who don’t have homes, and solving many of the problems in the Native community.”

Because Tilsen is still on bail he didn’t attend the demonstration scheduled on July 4, out of fear of being targeted by local law enforcement. If the motion is granted, all charges will be dismissed against Tilsen. A status hearing date hasn't been made public, but is expected by the Pennington County Attorney's Office.