Protesting Pipelines Through Street Murals: “The Paint Does All the Talking” 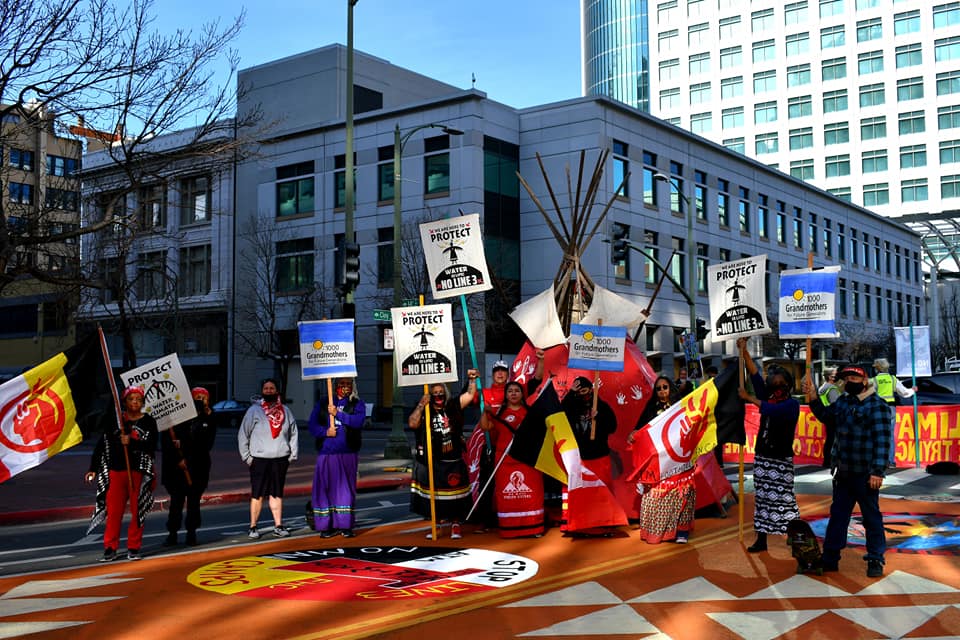 OAKLAND, Calif. — Several Native American groups, and other allies, took to a downtown Oakland, Calif street in front of the Ronald V. Dellums Federal Building on Saturday, Feb. 27, to protest oil pipelines and bring attention to the West Berkeley Shellmound that descendants of the Ohlone Tribe want returned to them as the original keepers of the land.

The protest was billed as a “Stop Line 3 & DAPL – Build Back Fossil Free Solidarity” event. The road was blocked, and people painted the street. The painted murals were intended to leave a message in a good way to stop the Dakota Access pipeline (DAPL) and the Enbridge Line 3 in Minnesota.

Street murals have become popular in recent years as a form of protest.

“The paint does all the talking,” David Solnit, a San Francisco artist who served as the organizer of the paint project on Saturday, told Native News Online.

The DAPL was the reason tens of thousands of American Indians and their allies went to Standing Rock in 2016 and early 2017. Organizers want the Biden administration to shut down the DAPL.

“This is a big message to Joe Biden and his administration to stop the Line 3 pipeline. We in the Bay Area are seeing the harm that is being done to our Indigenous peoples, Mother Earth and our water,” Isabella Zizi (Northern Cheyenne, Arikara and Muskogee Creek Nations), a member of Idle No More SF Bay, told Native News Online. “We are standing here to protect the sacred and to envision what the world would look like without fossil fuels. We are standing in solidarity here today.”

One mural painted Saturday was “Thunderbird Woman” that was designed by Isaac Murdock; she has appeared in past murals and flags and banners for climate justice and Indigenous sovereignty across Turtle Island.

The paint used was chosen with care to protect the environment. Painters used water soluble non-toxic tempera paint (used in classrooms) and the background is natural red clay paint from traditional Miwok territory.