Pressure for President Joe Biden to grant clemency to Leonard Peltier (Turtle Mountain Chippewa Nation) is increasing after it was announced two weeks ago the 77-year-old prisoner contracted COVID-19. Peltier, who tested positive for COVID-19 on January 28, 2022, is incarcerated at the United States Penitentiary at Coleman, Fla. (USP Coleman 1). 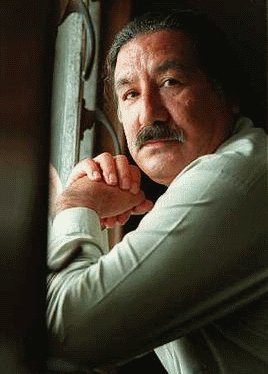 Peltier was convicted of killing two FBI agents in a shootout at Oglala on the Pine Ridge Indian Reservation in June 1975. Since many legal experts have maintained the federal case against Peltier was flawed. Native Americans across Indian Country consider him a political prisoner.

Since Peltier was diagnosed with COVID-19, the International Indian Treaty Council, based in Tucson, Ariz. has called on President Biden to release him from prison. In a letter dated Feb. 2, 2022, the IITC tells the president Peltier’s health condition necessitates his release:

“Mr. Peltier has several compounding health conditions, including kidney disease, diabetes, and high blood pressure. COVID-19 is a deadly virus in and of itself and the likelihood of long-COVID disabilities or death increase drastically with pre-existing conditions. A person that contracts COVID-19 with pre-existing kidney disease is twice as likely to succumb to the virus. A person that is over the age of 65 (Mr. Peltier is 77) is 80 times more likely to succumb to the virus.”

The IITC concludes the letter to with a compliment to the Biden administration for its work in Indian Country but emphasizes the need for action on the Peltier case.

“We have seen and felt the commitment the Biden Administration has shown to Indian Country and Indigenous communities. We need to see that same commitment to repair the relationship between the U.S. and Indigenous Peoples of this land in Mr. Peltier’s case,” the letter said.

In a statement, Leahy writes:

“I urge President Biden to commute Leonard Peltier’s prison sentence and release him from federal prison. Peltier, a prominent Native American activist, was imprisoned for crimes he and many other legal experts and advocates maintain he never committed. His trial was so riddled with flaws that even one of the prosecutors trying him has acknowledged that Peltier was wrongfully convicted. Peltier, now 77 years old and ailing with multiple health problems, has served more than 44 years in federal prison.”

Leahy concludes his statement by saying: “I call on President Biden to commute Mr. Peltier’s sentence expeditiously. It is the right thing to do.”

In the letter, the members of Congress write:

“In the federal government’s national response to the COVID-19 pandemic, the Department of Justice (DOJ) authorized the Federal Bureau of Prisons (BOP) to release elderly inmates and those with underlying health conditions from federal prisons. Since Mr. Peltier is 77 years old and suffers from diabetes and an abdominal aortic aneurysm, we urged you to release him from federal custody and grant him clemency immediately. Unfortunately, Mr. Peltier has contracted COVID-19 and is now at risk for additional medical complications.

Given Mr. Peltier’s new COVID-19 diagnosis and to avoid further risks to his health and safety, we urge you to approve his pending petition for clemency on humanitarian grounds.”