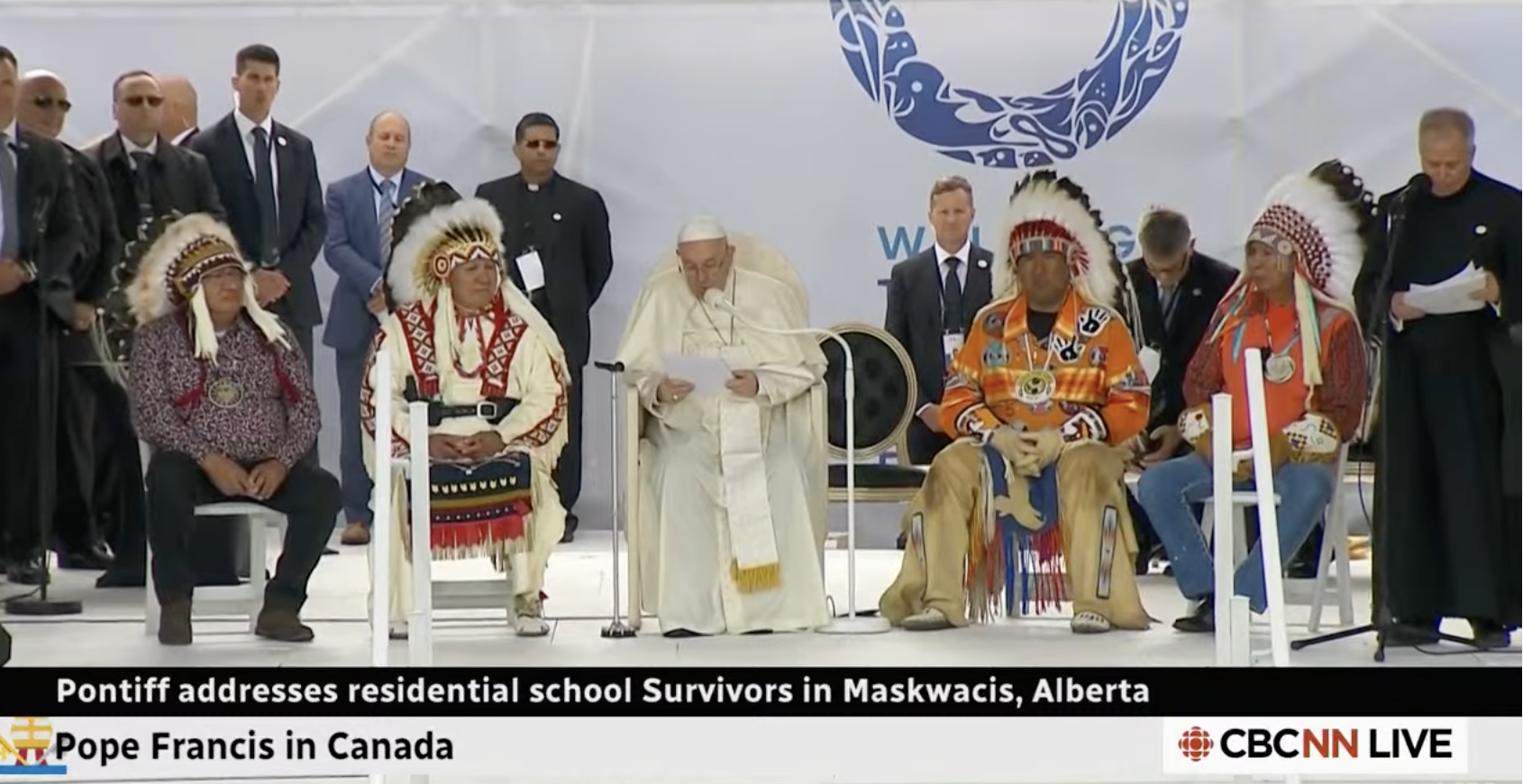 On Monday, seated on a stage in Alberta, Canada, before thousands of residential school survivors and their descendants, Pope Francis returned a pair of a child’s moccasins that have “kept alive [his] sense of sorrow, indignation and shame,” for the Catholic Church’s role in Canada’s Indian residential school system.

Indigneous leaders from Canada gave the Pope the moccasins in Rome earlier this year, when a delegation of First Nations, Métis, and Inuit residential school survivors were invited to privately meet with him.

Pope Francis said he was asked to return the moccasins–a sign of the suffering endured by Indigenous children, especially those who never came home from residential school– when he came to Canada.

“The memory of those children is indeed painful,” said Pope Francis, speaking through a translator, in a live streamed event from Maskwacis, Alberta, Canada, on July 25.

It marked the first stop in a six-day “penitential pilgrimage” across Canada to meet with Indigenous Peoples in Alberta, Quebec, and Nunavut.

His first stop, at the former grounds of the Ermineskin Residential School, was selected because it was one of the largest residential school sites in Canada. Thousands of residential school survivors from across Canada, tribal leaders, Governor General of Canada Mary Simon, and Canada’s Prime Minister, Justin Trudeau were all in attendance.

“It urges us to work to ensure that every child is treated with love, honor, and respect. At the same time, those moccasins also speak to us of a path to follow a journey that we desire to make together.”

In a nearly 30 minute speech, Pope Francis apologized and “beg[ged] forgiveness for the evil committed by so many Christians against the Indigenous peoples.”

For over a century, more than 150,000 Indigenous children in Canada were forcibly removed from their families to attend boarding schools meant to strip them of their language, culture, and self. The Catholic Church was responsible for running nearly 75 percent of the 130 residential schools operated across Canada.

Since May of 2021, over 1,400 Indigneous children's remains have been found in unmarked graves at the grounds of former residential schools across Canada, including 215 in Kamloops, 182 in Cranbrook, and more than 160 found on Penelakut Island–all in British Columbia–and 751 in Marieval, Saskatchewan.

“I am here because the first step of my penitential pilgrimage among you is that of again asking forgiveness of telling you once more that I am deeply sorry,” Pope Francis said. A round of applause broke out in the audience at the word ‘sorry.’

“Sorry for the ways in which regrettably, many Christians supported the colonizing mentality of the powers that oppressed Indigenous peoples. I ask forgiveness, in particular, for the ways in which many members of the church and of religious communities cooperated, not least through their indifference, in projects of cultural destruction and forced assimilation promoted by the governments of that time, which culminated in the system of residential schools.”

The Pope acknowledged that he “fully agrees” with Indigenous leaders who say that an apology is just a first step in seeking to repair the harm done. He said he will “continue to encourage the efforts of all Catholics to support the indigenous peoples.”

He also spoke of a need “to conduct a serious investigation into the facts of what took place in the past, and to assist the survivors of the residential schools to experience healing from the traumas they suffer,” which CBC commentators noted afterwards sounded strangely similar to the Truth and Reconciliation Commission active in Canada from 2008 to 2015.

Following his apology, local chiefs sang an honor song for the Pope. Willie Littlechild, an Ermineskin Residential School survivor and a former Treaty Six Nations grand chief and former commissioner of the Truth and Reconciliation Commission of Canada, bestowed a headpiece on Pope Francis’ head.

Natan Obed, president of the Inuit Tapiriit Kanatami (ITK) who was part of the delegation who traveled to Vatican City to meet with the Pope in April, said that thePope’s speech was thoughtful and showed he was paying attention to past meetings with First Nations, Métis, and Inuits in past meetings.

“It was good to hear the reflection back– especially [with] the moccasins, and the symbolism of that,” Obed said. “Beyond the apology, the recognition of the strength of Indigenous language, culture, identity, and human rights, those are things we still are fighting for in Canada and at the United Nations. So for an institution like the Catholic Church and the Pope to take the time to uphold the things that we are still fighting for… rounded out into something that I felt was quite sincere.”

The Confederacy of Treaty Six First Nations Chiefs, many of whom are survivors of the Ermineskin Residential School in Maskwacis, held a press conference after the Pope’s apology. Many of the Chiefs echoed one another in their insistence that it was an “historic day” that would serve as a path forward for Indigenous peoples of Canada.

“I anticipate this apology as we weigh heavily, and open old wounds for survivors,” Desmond Bull, Chief of the Louis Bull Tribe of the Maskwacis Nation in Alberta said. “For some, this apology may not be needed to begin their healing journey. For others, this apology may feel empty. However you feel, it is valid.”

What what missing from the Pope’s apology

After the Pope delivered his apology and welcomed survivors onto the stage to greet him, one woman’s shouts could be heard from the audience: “Repeal the doctrine of discovery!”

The Doctrine of Discovery gave European explorers authorization to seize land that was not populated by Christians “and to reduce their persons to perpetual slavery.” For many years, Indigenous leaders have been asking the Pope to revoke the Papal Bulls, of official decrees issued by a pope of the Catholic Church, that make up the doctrine of discovery.

The voice belonged to Chief Judy Wilson of the Union of B.C. Indian Chiefs, who was later interviewed on air by the CBC.

“It was important, maybe to some, to hear an apology,” Wilson said. “But at the heart of the matter is ending the genocide with the colonial impositions that have happened to our people, and that are continuing to happen. Without the renouncement of the doctrine of discovery, we're locked in a closed system. The Pope didn’t say it. He failed.”

Several residential school survivors said that they felt the Pope’s apology to be genuine.

Yvonee Longworth, a survivor, said that she had tears through her eyes throughout the apology speech.

“I felt in my heart, the Pope really means it,” she said. “But where are our records?”

The Oblates, which ran 48 residentials schools in Canada, has its own records. Last month, they committed to releasing all records related to two residential schools.

What about boarding school survivors in the United States?

United States boarding school survivors and their descendants listening to the Pope’s speech on Monday may have noticed they were not specifically named in his apology on Monday.

Instead, the Pope said that “the worlds that I speak are meant for every Indigenous people and community.”

In response to Pope Francis’ apology, National Congress of American Indians (NCAI) President Fawn Sharp issued him a letter, acknowledging the beginning of a new chapter for truth and reconciliation and inviting the Pope to work with NCAI to open all records related to Federal Indian boarding schools.

“Though your apology was limited to the role the Catholic Church played in Canadian Indian residential schools, the history of cultural genocide, territorial dispossession, and death at assimilationist schools run by the Catholic Church is shared by American Indians, Alaska Natives, and Native Hawaiians in the United States,” Sharp wrote, noting that boarding schools in Canada were actually modeled after the United States’.

“The Catholic Church holds important records about Federal Indian boarding schools that can help bring the truth to light. We cannot hold abusers accountable, seek redress for harm, or reconcile with the Church, government institutions, and, in some cases, our own communities and families, until we know the full, unadulterated truth—truth the Catholic Church is actively withholding. It is crucial we have church support and partnership in working to bring the truth to light.”

"The Holy Father’s “penitential pilgrimage” to Canada this week offers the opportunity to engage in real and honest dialogue on the issue of boarding school accountability here in the United States," Chieko Noguchi, a spokesperson for the United States Conference of Catholic Bishops, wrote to Native News Online. "The U.S. bishops and the state Catholic conferences have been engaged in ongoing dialogue with tribal and [I]ndigenous community leaders on the issue of the boarding school period in the United States as a vital part of the process to inclusively discern how to go forward together as the Catholic Church walks with the impacted communities on a path towards healing."

To follow along on the Pope’s journey across Canada, or to request tickets to see him in person, visit www.papalvisit.ca.