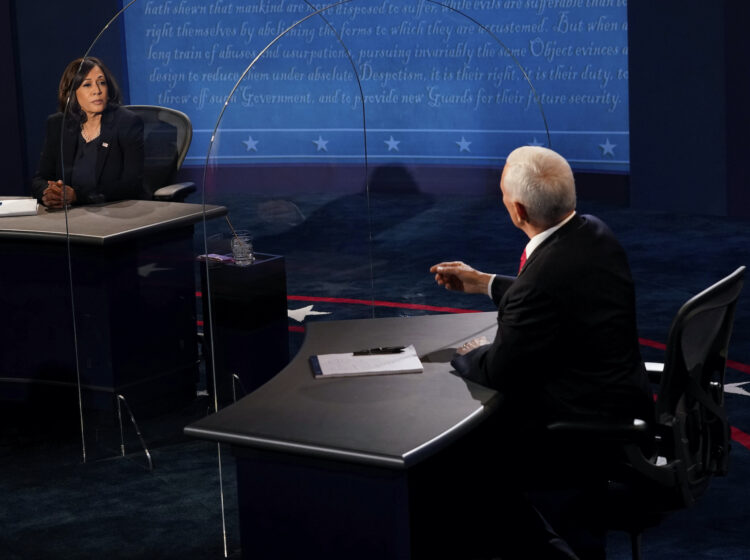 SALT LAKE CITY — The talk of the one and only 2020 vice presidential debate comes from a fly landing on Vice President Mike Pence’s white hair. The fly stayed on the vice president’s head for two minutes and three seconds.

The fly incident came towards the end of what seemed like a long 90-minutes of back-and-forth between Pence and Democratic vice president nominee Sen. Kamala Harris (D-CA). Both seemed to dodge the moderator’s questions at times.

Sitting just over 12-feet apart, the vice president and Harris faced off on Wednesday night at the University of Utah in Salt Lake City, Utah. Not only were they separated by distance, the candidates were separated by plexiglass that served as a stark reminder of the deadly novel coronavirus that plagues the nation.

The two candidates took to the stage with only 27 days until the presidential election on Nov. 3. During the debate, both candidates did what running mates are supposed to do in elections: they provided cover for the top of the ticket. Pence defended President Donald Trump's record and Harris promoted the leadership abilities of the Democratic Party’s presidential nominee, former vice president Joe Biden.

While last night’s debate was much more civil than last week’s ugly presidential debate, there were still moments when the candidates interrupted each other.

Pence came up with answers that seemed rehearsed, as if the White House’s public relations team gave him a set of talking points that were filled with exaggerated truths that were disconnected from reality.

Harris, a first-term U.S. senator from California, previously served as a prosecutor and her prosecutorial talents were evident during the debate as she took Pence on with his half-truths and outright lies. An evangelical Christian, Pence did not seem to have a problem telling the exaggerated truth.

The moderator, Susan Page, asked a question about Breonna Taylor, a Black woman who died after Louisville police fired more than 20 rounds into her apartment, and whether she received justice with the decision by a grand jury not to indict the officers involved in her death.

Harris said she did not believe Taylor received justice. Pence said he “trusts our justice system.” He then told Harris he considers it an “insult” when Biden and Harris refer to systemic racism in the criminal justice system.

“Joe Biden and I recognize that implicit bias does exist, Mr. Vice President, contrary to what you might believe,” Harris replied. “Again, I will not be lectured by the Vice President on our record.”

“You tell him @KamalaHarris! Never let a man lecture you when you know more,” Rep. Deb Haaland (D-N.M,), a tribal citizen of Laguna Pueblo, tweeted during the debate.

Pence’s defense of the Trump administration’s race relations did not sit well with all American Indians.

“White supremacy was evident from Pence as he tried to overwhelm Harris. But she held her own and didn't tell lies. He didn't answer the questions either. It's baffling how Pence ignores statistics, facts and regurgitates the Trump line,” Gay Kingman (Cheyenne River Sioux Tribe), executive director of the Great Plains Chairman’s Association, told Native News Online.

Other Native Americans weighed in on the debate. Theda New Breast (Blackfeet), a longtime Native prevention specialist, likes what she heard during the debate.