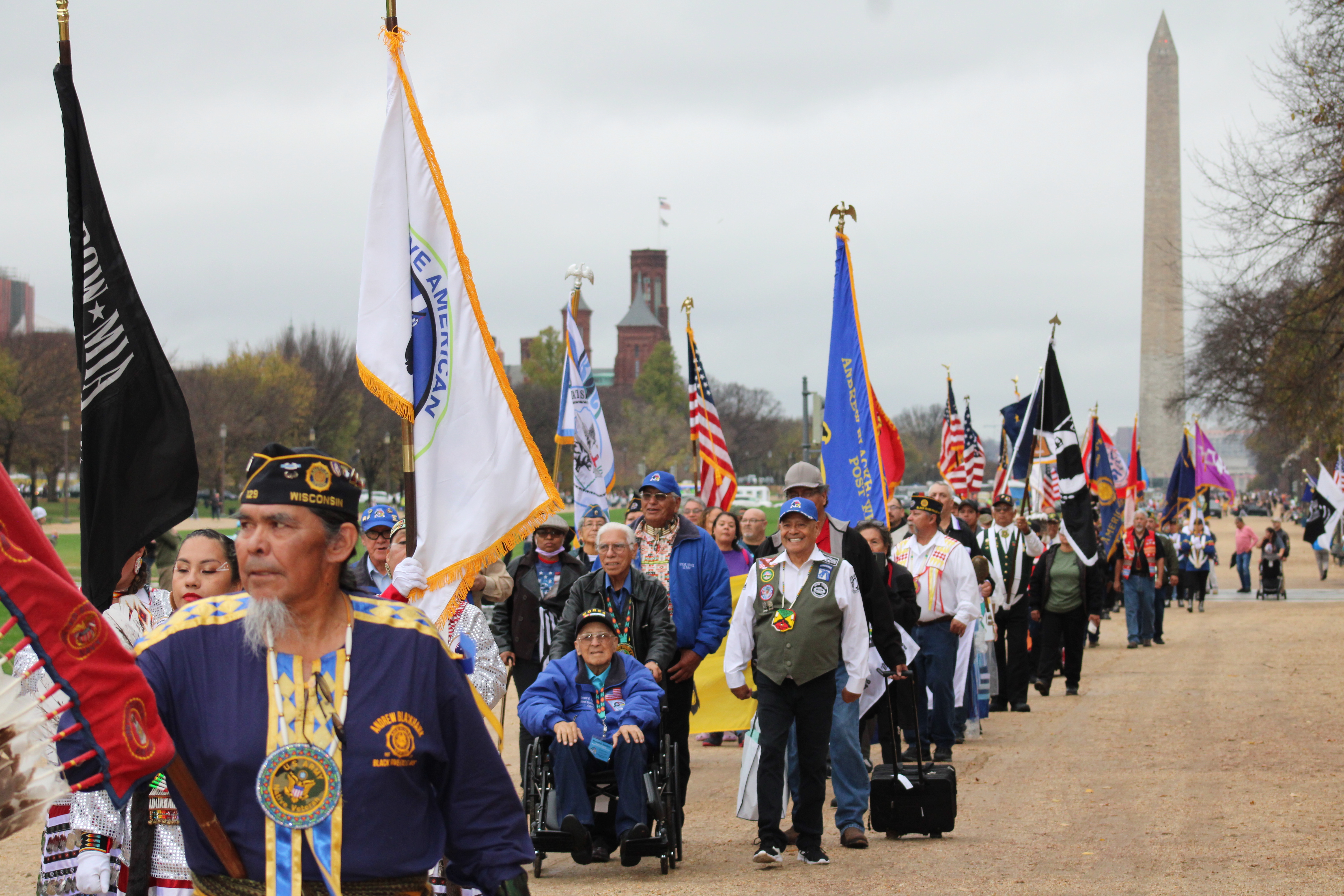 WASHINGTON — For over 1,500 American Indian, Alaska Native, and Native Hawaiian veterans who were on hand for the dedication of the National Native American Veterans Memorial in Washington, D.C. on Friday, it is one Veterans Day they will remember for the rest of their lives.

Michael Coon traveled with a group of veterans from the Muscogee Creek Nation from Oklahoma and had tears of joy in participating in the grand procession for the National Native American Veterans Memorial.

His father, Philip Coon, was a prisoner of war in the Pacific Theater during World War II and survivor of the Bataan Death March.

The event was co-emceed by Retired Captain of the U.S. Navy John Herrington (Chickasaw), the first Native American astronaut to go into space, and Retired Sergeant of the U.S. Army Wes Studi (Cherokee), who is an Academy Award-winner. Studi served 12 months in the Vietnam War and was honorably discharged by the U.S. Army in 1969.

“A Native American on any battlefield is a formidable force to be reckoned with,” Studi said. Studi expanded on his comment by discussing the football competition in 1912 between West Point Academy and the Carlisle Indians.

“Eisenhower said, ‘here and there, there are some people who are supremely talented and my memory goes back to Jim Thorpe,’” Studi said of Eisenhower’s comments on Jim Thorpe once he was president. “He could do anything better than any football player I ever saw.”

The National Native Americans Veterans Memorial’s design is an elevated stainless-steel circle balanced on a carved stone drum on the campus of the Smithsonian’s National Museum of the American Indian. The design was created by Harvey Pratt, a Vietnam War veteran and Cheyenne and Arapaho Tribes of Oklahoma citizen. The design incorporates water for ceremonies, benches for gathering and reflection, and four lances where people can tie prayer cloths for offerings and reflection.

“I want to look at the heavens today, the Creator gave us a nice gentle rain, to water Mother Earth, and for us to start a new day,” said Harvey Pratt during Friday’s dedication to the National Native American Veterans Memorial. “This memorial came about in a dream, as I gather all of my life experiences as a Southern Cheyenne Peace Chief.”

“We created a path of life, a warrior’s circle of honor, lances with sacred colors and prayer clothes, water, the air, the earth, and fire,” said Pratt. “I want to thank the Creator, for creation warriors—without them, we may not be here.”

The memorial honors Native American veterans and their families, and educates the public about their extraordinary contributions. The memorial is the first national landmark in the nation’s capital to commemorate the military contributions of American Indians, Alaskan Natives and Native Hawaiians. According to the Smithsonian, Native Americans’ service in the United States military began at the Revolutionary War, in 1775.

“We are proud to host the National Native American Veterans Memorial at the National Museum of the American Indian for time immemorial,” said Secretary of the Smithsonian Lonnie Bunch III during Friday’s dedication.

The Smithsonian’s National Museum of the American Indian curated a weekend of events on Saturday and Sunday including music, film, food, and celebration at the museum. Veterans in attendance included Daniel Loudner, Hunkpati Dakota national commander of the American Indian Veterans Association and one of the last living Navajo Code Talkers, Thomas Begay.