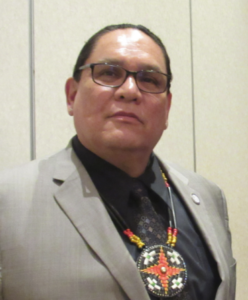 LAS VEGAS — National Indian Gaming Association Chairman Ernest L. Stevens, Jr. (Oneida) received the first ICE Landmark Award for the enormous contribution he has made in highlighting the positive impacts of Indian gaming, as well as his support for the development of the ICE brand, including the launch of ICE North America, which takes place May 13-14 in New Orleans.

“Ernest L. Stevens, Jr. has worked with great commitment, dedication and professionalism to raise awareness of Indian gaming. During his period of office, Indian gaming revenues have risen over $39.1 billion, making Tribal government gaming the largest segment of the industry in the United States. On a more personal note, he has been a source of great inspiration to myself and the team responsible for developing the ICE brand. The insight, kindness and support he has shown over the last decade have been greatly,” Kate Chambers, managing director of ICE North America’s organizers, Clarion Gaming said.

Last April, the NIGA and Clarion Gaming signed a strategic agreement of support between the two organizations to grow the gaming industry.

“Tribal government gaming has been vital to achieving so much for tribal communities and beyond. As an industry, we are proud of the fact our professionals in the gaming properties are now the experts on gaming worldwide. They will be the force that will lead the next generation of the gaming industry for our next seven generations,” Stevens said.