WASHINGTON — The National Indian Gaming Association (NIGA) is calling on the U.S. Department of Treasury to rely on the Federally Recognized Indian Tribe List Act when fulfilling Congress’ intention to provide funds to tribes from the CARES Act.

In a statement released Tuesday afternoon, NIGA asked the Treasury Department to reject the Bureau of Indian Affairs’ “legal interpretation which is incorrect on its face, according to a strict construction of the CARES Act.”

Tribes faced a deadline last Friday, April 17, 2020 to register with the Treasury Department for funds that are due to be distributed on Friday, April 24, 2020. 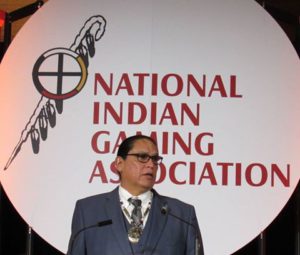 Below is the complete NIGA statement:

“As we face the unprecedented challenges of the national Coronavirus Emergency, now more than ever Indian Country must pray to the Creator for the life and health of our communities and our people. We are carefully taking small steps towards a new future with the hope for renewed health and economic recovery. Congress’ $8 billion allocation for Tribal Governments is part of that initial step in our recovery.

There Is An Existential Challenge to Indian Country’s Inherent and Federal Status as Sovereign Indian nations and governments: BIA’s Radical Plan for ANCs

At the National Indian Gaming Association, we respect the status of all Indian Nations and Tribes, including Alaska Native villages, as sovereigns.  Yet, we cannot countenance the Bureau of Indian Affairs (BIA)’s new policy to attempt to treat state-chartered Alaska Native Corporations (ANCs) as Indian tribes or ANC fee lands as Indian lands.  (*See Alaska v. Native Village of Venetie*, 522 U.S. 502 [1998]).

From its first days, the United States sought out Indian Nations for counsel and assistance. The Oneida Nation brought corn to the Continental Army at Valley Forge, saving them during the frozen winter to win Independence. The United States entered into Treaties with the Six Nations, Delaware, Shawnee, Cherokee, Creek, Chickasaws, Delaware, Micmac, Penobscot, Wyandot and other Indian Nations in these early Revolutionary War days.

On July 26, 1776, James Wilson, Pennsylvania delegate to the Continental Congress, argued for a unified national approach to Indian affairs:

No lasting peace will be [made] with the Indians, unless made by some one body…. Indians know the striking benefits of confederation; they have an example of it in the union of the Six Nations…. None should trade with the Indians without a license from Congress. A perpetual war would be unavoidable….

General George Washington and the Framers of the Constitution empowered the United States of America, the National Government, to make treaties between nations, and “to regulate commerce … with the Indian Tribes.”  In 1790, President Washington entered into the Treaty with the Creek Nation, the first Treaty under the Constitution of the United States, which serves as a model for the ratification of all subsequent treaties, Indian and international.  The United States entered into more than 375 treaties with Indian Nations, which the U.S. Constitution in the Supremacy Clause establishes as among the Supreme Law of the Land.

Historically, most Indian Nations and tribes were recognized by treaty, statute, Executive Order, or court decision. Since the 1970s, the BIA has also recognized Indian tribes through the Federal Acknowledgement Process, and Congress has recognized Indian tribes by statute. Prior to the BIA’s current misguided policy announcement about ANC eligibility, the BIA explained, “federally recognized tribes are recognized as possessing certain inherent rights of self-government (i.e., tribal sovereignty) and are entitled to receive certain federal benefits, services, and protections because of their special relationship with the United States. At present, there are 573 federally recognized American Indian and Alaska Native tribes and villages.”

Since 1994, only Indian Nations and tribes with “inherent rights of self-government’ have been recognized on the Secretary’s List of Federally Recognized Indian Tribes, such as Indian Nations and tribes, Pueblos, Confederated Tribes, and Alaska Native villages. On January 30, 2020, Interior published the Federal government’s annual list of federally-recognized Indian Tribes. Alaska Native villages are on the list because they are “Indian tribes.”

The CARES Act references the definition of “Indian tribe” in 25 U.S.C. § 5304(e), which dates to 1975. ANCs are not federally-recognized Indian tribes under the second-prong of the definition: “recognized as eligible for the programs and services that the United States provides to Indian tribes based upon their status as Indians.” BIA now reads only the first part of the Indian tribe definition to obscure its meaning when it comes to CARES Act funding. Alaska Native Corporations are not directly eligible for funding under the CARES Act because they are not Federally Recognized Indian Tribes per the List Act, which uses the same Indian program eligibility language as the Indian Self-Determination Act. ANCs can act as agencies of Alaska Native village if, by resolution, the Alaska Native village authorizes them to do so. Even under this condition, ANCs are not Indian tribes.

We hope that the Treasury Department rejects the BIA’s legal interpretation which is incorrect on its face, according to a strict construction of the CARES Act. Indian Country has already united around rejecting the patently and legally insufficient plan proffered by the BIA, under Assistant Secretary of Indian Affairs, Tara Sweeney’s leadership. We must call upon the President and Congress to use the Federally Recognized Indian Tribe List Act in the future because the List is intended to include “all of the federally recognized Indian tribes in the United States which are eligible for the special programs and services provided by the United States to Indians because of their status as Indians.”

Please write to your Senators and Congressmen to call upon the United States to use the Federally Recognized Indian Tribe List Act in all future funding for Federal programs and services for Indian tribes.

A model letter is attached.