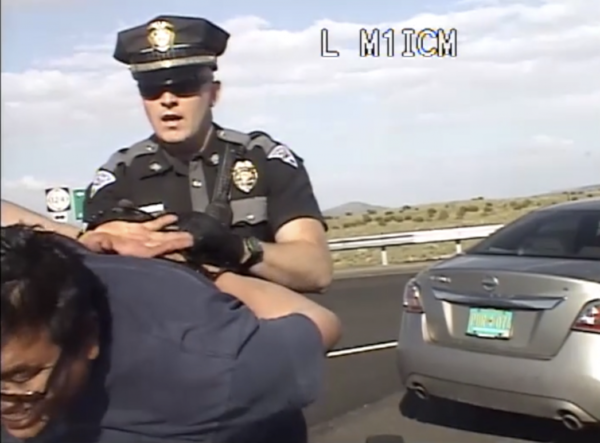 ALBUQUERQUE, N.M. — On Tuesday, the American Civil Liberties Union (ACLU) of New Mexico filed a lawsuit against a New Mexico State Police (NMSP) officer and the New Mexico Department of Public Safety, alleging that NMSP officer Sondre Loberg used excessive force against Dametrio Maldonado, 57, who is Native American and a member of Acoma Pueblo, during a routine traffic incident in May 2019.

The complaint alleges that Mr. Maldonado, who called emergency services to the scene of a car crash, suffered lasting injury and pain after responding officer Loberg targeted him for violent and discriminatory treatment at the scene.

“Our client was simply trying to do the right thing by rendering aid to a crashed motorist,” said ACLU of New Mexico Indigenous Justice Attorney Preston Sanchez, “Instead of thanking him for doing what any humane and civic minded person would do, a responding NMSP officer singled him out for harassment and abuse resulting in lasting injury. This incident blatantly reflects a system of policing in New Mexico that is racially biased. We cannot allow those practices to continue.”

On May 26, 2019, Mr. Maldonado and his daughter Ellen were driving westbound on I-40 on the way to do volunteer work in preparation for the Acoma Seed Run. After exiting the interstate at the turnoff for Acoma Pueblo, they came upon a single car collision at the interstate overpass and observed a woman sitting on the ground near the wrecked vehicle in distress. Mr. Maldonado pulled over to the side of the overpass and his daughter exited the vehicle to render aid while he called 911.

Acoma Tribal Police quickly arrived at the scene, followed by Officer Loberg shortly thereafter. Loberg immediately zeroed in on Mr. Maldonado who was waiting in his vehicle for his daughter on the shoulder of the overpass and began screaming at him to move his car. Mr. Maldonado politely smiled in acknowledgement and proceeded to drive his car past the overpass and park further down the road to wait.

Taking Maldonado’s polite acknowledgement as insult, Loberg whipped his patrol vehicle around to follow Maldonado, removed him from his vehicle and wrenched Maldonado’s arms behind his back in an attempt to place him in cuffs. Due to Maldonado’s large stature, his wrists were unable to meet behind his back and the officer’s violent attempts to force them together caused him excruciating pain. Officer Loberg accused Maldonado of trying to “fight him” and slammed him against the hood of his patrol unit with enough force that Maldonado’s phone screen shattered in his pocket.

Secured with two pairs of handcuffs biting deep into his wrists, Mr. Maldonado was forced to sit in the back of Officer Loberg’s patrol unit in severe pain for nearly twenty minutes until the responding Acoma Sergeant convinced Loberg to release him. Before allowing Mr. Maldonado to continue on his way, Officer Loberg subjected him to additional verbal harassment and issued him a citation for “unlawful parking.”

“It was a humiliating and scary experience,” said Mr. Maldonado. “I didn’t do anything wrong, but I was afraid the officer was going to kill me if I made the wrong move. I don’t want any other person to have to go through the same thing I did that day.”

The injuries Mr. Maldonado’s sustained in the encounter required a visit to the emergency room and subsequent physical therapy. His physical injuries from the incident forced him to forgo farming activities during the subsequent growing and harvest seasons, depriving his family and community of the crops he normally grows.

The lawsuit filed Tuesday by the ACLU of New Mexico asks the court to award damages and other relief on behalf of Mr. Maldonado.