Need a Laugh? Here are five Indigenous Comics to check out 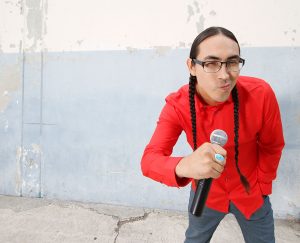 With the news cycle being an endless stream of bad, sad and downright discouraging news these days, it’s important to take a break and have a good laugh. The new stand-up comedy album Treaty 1 and Only might just be the ticket.

The new record showcases five established Indigenous comedians, serving up hilarious takes on everything from family dynamics and dating, to the classic-rock band AC/DC. Set for an April 24 release by Comedy Records, this dynamic compilation was recorded live at the 2019 Winnipeg Comedy Festival at the Gas Station Arts Centre. The collection will stream on all platforms, including Spotify, Google Play and Apple Music. The aptly-named Comedy Records, Canada’s first comedy-centered label, was founded in 2010 and has since produced chart-topping releases and has been featured on Conan and Jimmy Kimmel Live. As for Treaty 1 and Only, here is a breakdown of the featured comics, via Comedy Records: Howie Miller is a First Nation Descendant of the Cree Nation from Edmonton, Alberta. His quick wit, unique point of view and stellar impressions keep audiences laughing. Sample his comedy, here.

Chad Anderson is a stand-up comedian originally from The Pas, Manitoba. Over his decade-long career, Anderson has toured across Canada, performed in the Winnipeg Comedy Festival, Oddblock Comedy Festival, the Arctic Air Comedy Festival and was a cast member in Mary Walsh’s Canada, It's Complicated. Sample his comedy, here.

Florence Spence is a stand-up comedian from York Factory Cree Nation. Spence has broken down barriers across Manitoba with her raw and real material. With her witty observations and captivating stage presence, she might just be your next favorite comedian.

Paul Rabliauskas, from Poplar River First Nation, has performed for several years at the Winnipeg Comedy Festival, the Oddblock Comedy Block Party and has been featured on CBC’s The Debaters. His charming, brash and boisterous style has made him a favorite across Canada. Sample his comedy, here.

Tatanka Means is an award-winning actor and stand-up comedian from Chinle, Arizona. Means represents the Navajo, Oglala Lakota and Omaha Nations and is one of the busiest touring Native American comedians performing today, sharing his hilarious stand-up comedy and motivational messages all over Indian Country. Sample his comedy, here. To keep up with the entire Comedy Records roster, follow the label on Facebook.