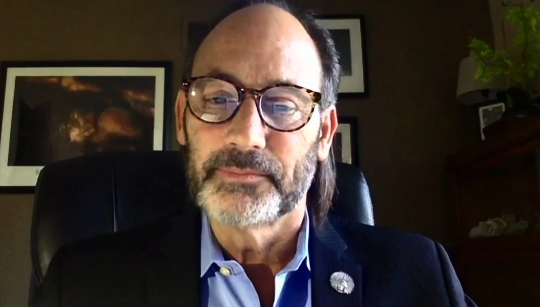 WASHINGTON — For the first time in its history, the National Congress of American Indians (NCAI) is hosting its conference virtually this week. Due to the Covid-19 pandemic and the public health crisis of 2020, leaders of the largest national American Indian organization decided it was in the best health and safety interests of those who normally attend NCAI that the event be held virtually.

The National Congress of American Indians’ 77th Annual Convention & Marketplace: Truth & Reconciliation kicked off in a fully virtual setting on Monday afternoon. The virtual convention will run through Nov. 13.

Sharp discussed how the Covid-19 pandemic hit Indian Country hard, but the health crisis would not stop Native communities from coming together to meet about its future.

A surprise came when Allis told the convention he was leaving NCAI in about two months. He did not specify the exact date he would be leaving but would work with the NCAI staff to ensure a smooth transition.

Allis has been in his post for 18 months. He assumed the position in June 2019, taking over after Jacqueline Pata, the previous executive director (the title was changed upon hiring Allis), served NCAI for 18 years.

“Having the opportunity to serve Indian Country in this capacity has been the job of a lifetime. It has been an honor to work alongside the talented staff at NCAI on behalf of tribal nations. I've been here since June 2019, a year and a half. And my vision here was to get the organization to a place where it was financially strong, internally solid, the infrastructure sound, the work environment comfortable, and the output amazing,” Allis said during his remarks.

“We have made it to where we needed to go. And now it's time to pass the torch to a new executive officer that will take what we've built in the last 18 months and take it even further. I'm going to be transitioning out of NCAI over the course of the next couple of months,” said Allis.

“During his tenure as NCAI’s first CEO, Kevin played an integral role in advancing the interests of tribal nations in Washington, D.C. and throughout Indian Country,” Sharp commented, adding, “NCAI wishes Kevin well in his future endeavors and thanks him for his service.”

Prior to coming to NCAI, Allis’s previous roles include executive director of the Native American Contractors Association, board chairman of the Potawatomi Business Development Corporation, and founder of Thunderbird Strategies, LLC, a government relations firm specializing in advocacy of Native American rights. He is also an attorney and former law enforcement officer who served the Baltimore Police Department for eight years.

As NCAI celebrates 77 years of serving the broad interests of tribal nations, this year’s Annual Convention theme, “Truth and Reconciliation,” explores the current state of tribal sovereignty and affirms the commitment of tribal nations to use this forum to forge and advance critical priorities in a unified way, with the ultimate goal of ensuring true government-to-government relationships with the United States.