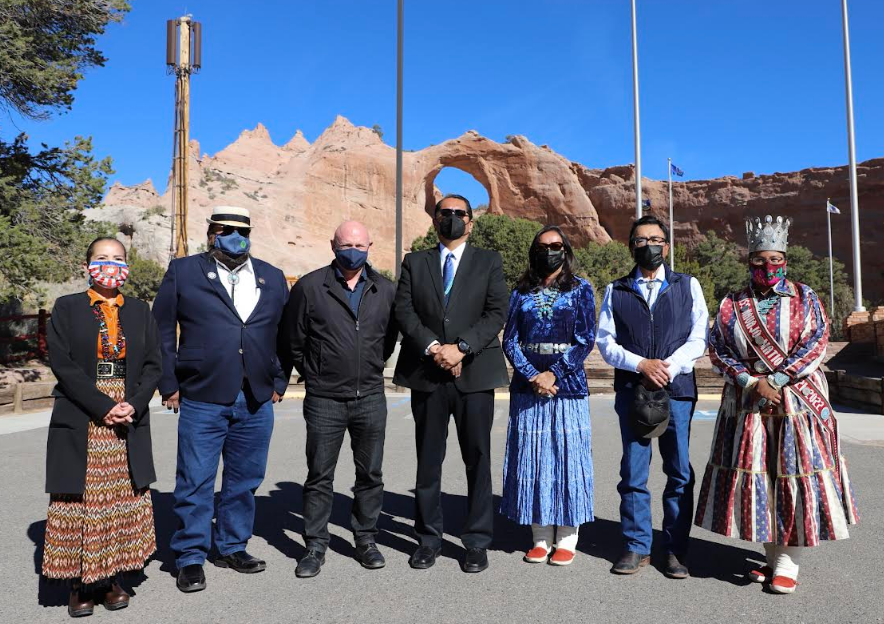 Sen. Kelly said he wanted to be on the Navajo Nation on Veterans Day because he understands the long and proud history of military service that the Navajo people have provided for so many years. He also spoke about the need for the federal government to provide more support and services for all veterans.

During his address, President Nez delivered a message of appreciation to all Navajo veterans, their families, and their communities. He also acknowledged Gold Star Mothers and Families who have lost their loved ones during military service.

"It is my honor to recognize the thousands of Navajo veterans who have served our country in every branch of the Armed Services,” President Nez said.

“We cannot celebrate this special day without acknowledging our Navajo Code Talkers, who used our sacred language, the words of our ancestors, to help win World War II. We pray for them and all of their loved ones. Today is a time to be proud of who we are as Diné people, to pay tribute to all of the men and women who serve our country, and to honor and remember those who gave their lives for our freedom and our country,” President Nez said.

The ceremony was live streamed on the Navajo Naton's YouTube channel.

In addition to attending the Veterans Day ceremony, Sen. Kelly was welcomed by Speaker Seth Damon and members of the 24th Navajo Nation Council to the capital of the largest sovereign nation in the United States. The senator toured the Council Chambers and responded to questions from delegates.

“Thank you for inviting me to the Navajo Nation and into these sacred chambers,” said Senator Mark Kelly (Arizona). “The recent infrastructure bill passed by Congress will be signed into law by President Biden.This act includes funds for tribal water rights settlements and a large allocation for water projects across Indian Country. We have been focused in the Senate on projects that will rebuild our country and lift up all Americans, which includes our tribal nations.”