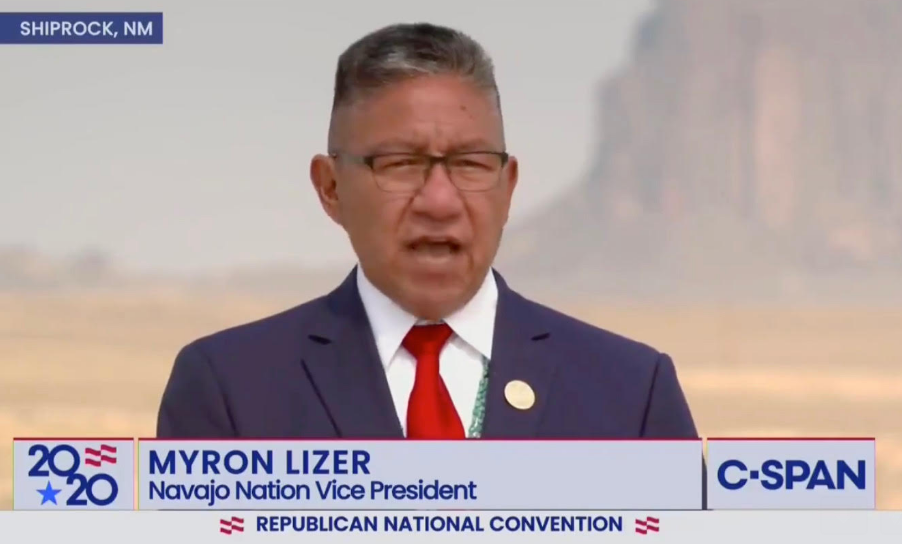 SHIPROCK, N.M. — Wearing a red tie with a turquoise necklace around his neck, Navajo Nation Vice President Myron Lizer spoke to a national audience on Tuesday night, appearing in primetime during the Republican National Convention from Shiprock, N.M. on the Navajo Nation in a pre-recorded taped video.

Tuesday’s night’s convention theme was "Honoring the Great American Story" with a sub-theme of the "Land of Opportunity."

Lizer was among 17 people from various walks of life who spoke in support of President Donald Trump’s reelection in November.

“I give this address from the majestic rock spires of Shiprock, Tse Bit’ai or Rock with Wings, as known by our Dine’ People. It is here that many of our ancestral leaders sought to govern and lead a Nation within a Nation,” Lizer said in his opening remarks.

Much of Lizer’s remarks focused on the pursuit of the “American dream” and his views about the Trump Administration’s contributions to Indian Country.

“You see our People have never been invited into the American Dream. For years we’ve fought congressional battles with past congressmen and senators that were part of a broken system that ignored us. That is, until President Trump took office. President Trump delivered the largest financial funding package ever to Indian Country. The $8 billion in CARES Act funding to Indian County was a great start in alleviating the devastating effects that the COVID-19 pandemic has inflicted on our Indian tribes The Navajo Nation once led the nation in per capita positive cases because of the health disparities that previous administrations failed to improve,” Lizer said.

In the video, “I’m excited to endorse President Trump’s reelection. And Mr. President, we look forward to hosting you very soon to come visit our land we call Dine’tah,” Lizer said.

Lizer gave Trump credit for CARES Act funding, appropriated by Congress. He did not mention that the Navajo Nation, which he represents, sued the federal government to receive the funding.

Lizer, a Republican, represented the Navajo Nation two times within the past year at the White House. Lizer, and his wife, Dottie, attended an Oval Office signing ceremony when the president signed an executive order establishing a task force on missing and murdered Indigenous women. They were back on January 15, 2020 when the president signed a renegotiated deal with China.

On May 5, 2020, Lizer and his wife met with the president in an event that was billed as a tribal leaders summit when only three American Indians were in attendance.

Lizer also drew criticism for attending an event on June 23, 2020 hosted by Students for Trump at the Dream City Church in Phoenix because most of the attendees were not wearing facial masks. Lizer was wearing a mask.

Last week, Navajo Nation President Jonathan Nez, who is a Democrat, was a keynote speaker during the Democratic National Convention.